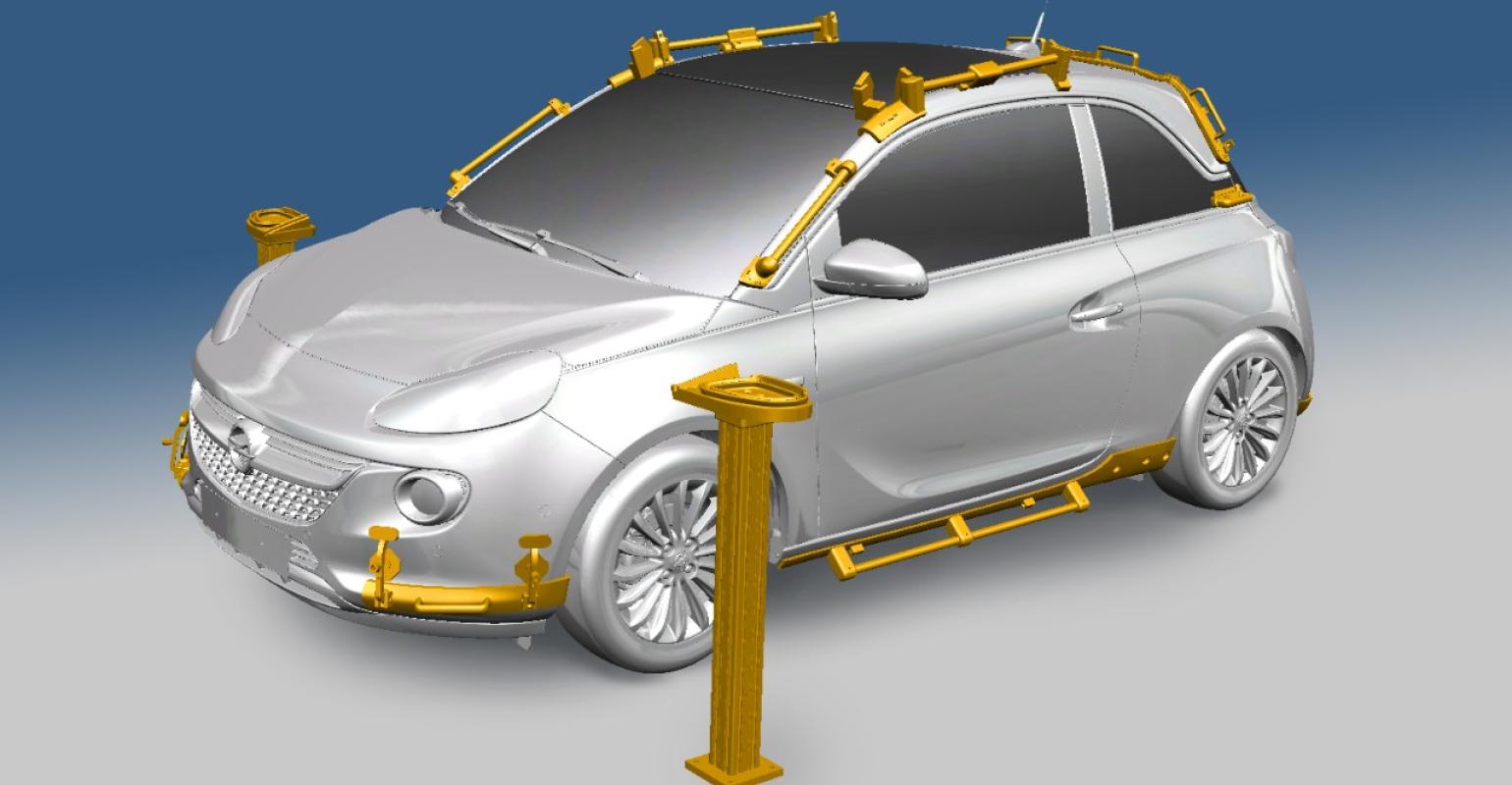 Cheaper and quicker to produce, these tools are being used at Eisenach for the assembly of the Adam and its new Adam Rocks stable-mate. And this is just the beginning - Opel experts predict the use of tools from a 3D printer will continue to grow. "In the future, more and more 3D assembly tools will be integrated into the production process," says Sascha Holl.

For production of the Adam Rocks, to be launched in September, the Eisenach carmakers use an assembly jig - a specific, fixed frame - made by a 3D printer to produce the vehicle name logotype on the side window. And for the windshield, a 3D-printed inlet guide is also used to simplify the mounting process and help ensure a precise alignment. Other tools from the printer are used to fasten the chrome step plate on Adam Rocks door openings and install the standard Swing Top canvas roof. Around 40 such assembly aids and jigs are used in Eisenach.

This equipment was developed on the computer during the development phase of Adam Rocks. "It enables us to quickly adapt. If something changes on the vehicle, we can easily modify the tool with just a few clicks," explains Holl. "The 3D printing process enables us to produce every imaginable form and shape. Unlike conventional manufacturing technology, we don't have to accept any limitations."

Using technology to join a number of smaller elements, it is possible to produce larger tools and jigs beyond the size limitations of the 3D printers employed according to Opel. One such case was development of assembly aids for the side sill and the rear spoiler of the Adam Rocks.

During the 3D printing process, plastic is melted and laid down in successive layers, each just 0.25 mm thick. The plastic used is reportedly light, robust and versatile. Hollow spaces and overhangs are automatically treated with a filling material, which is later washed away in a type of dishwasher. "The process is comparable to bridge or balustrade construction," says Holl. "High or protruding elements must also be shored up and supported until everything has hardened. Only then is the supporting framework removed."

The small number of jigs required in final assembly were previously fabricated manually in an elaborate process using a milled cast and resin. Thanks to 3D printing, the production cost of these aids has now been reduced by up to 90 percent. In addition, the printed tools are ready to use after just about eight hours, and are up to 70 percent lighter in weight.

Another advantage is that these aids can be mechanically and chemically processed. For example, they can be drilled, milled, sanded, varnished and bonded, or connected and combined with various other materials. Ergonomic fine-tuning can also be carried out on a PC in a matter of minutes. "We can adapt the tools for each assembly situation, as well as make them user-friendly for our colleagues on the line," adds Holl.

Production of the Opel Insignia and Cascada convertible also benefits from 3D printer tools, which will be introduced step-by-step for the assembly of other Opel models. The new Corsa, Vivaro and Mokka, which will begin rolling off the assembly lines in Zaragoza later this year, will be among models built with the help of tools from a 3D printer.