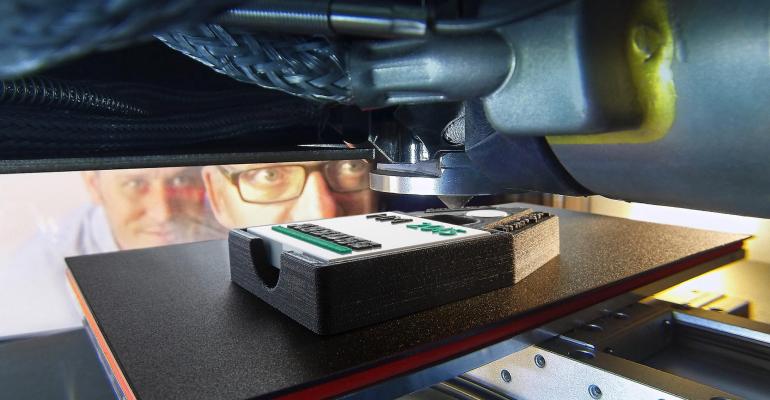 Furthermore, Tempco, a leading molder of electrical and electronic compounds, will take delivery of its 100th Arburg machine in October according to David Chan, David Chan, Managing Director of Arburg Singapore and responsible for the entire ASEAN region.

With Arburg Plastic Freeforming, the standard granulate is initially melted in a plasticizing cylinder similarly to injection molding. A stationary discharge unit with a special nozzle then applies tiny plastic droplets layer-by-layer onto the part carrier using high-frequency piezo technology at a specified duty cycle of 60 to 200 Hertz. Depending on the nozzle used, the diameter of the droplets generated under pressure is between 0.2 and 0.3 millimeters.

The moving part carrier is positioned so that each droplet is deposited at the precise point calculated in advance. During cooling, the tiny droplets automatically fuse together. The desired three-dimensional component is thus created layer by layer. The construction chamber of the Freeformer offers space for parts with maximum dimensions of 190 x 135 x 250 millimeters.

Arburg was demonstrating its Freeformer live at the T-Plas show held in Bangkok August 26 through 29. At the show, a Freeformer unit outfitted with a second discharge unit was demonstrated. This dual-unit machine can be used to form parts in different colors, with special tactile qualities, or as a hard/soft combination. Further, this unit can be used to build up structures from a water-soluble support material. This makes it possible to achieve unusual or very complex part geometries.

At T-Plas 2015, the Freeformer was producing a spray head for cosmetics containers and a "gear card" from the acrylonitrile-butadiene-styrene (ABS) resin. Once the supporting structures have been removed in the water bath, the parts can be used as design prototypes as well as for functional and assembly tests. Currently the Freeformer can form parts using thermoplastic polyurethane (TPU), polycarbonate (PC), and polyamide (PA) 12, in addition to ABS.