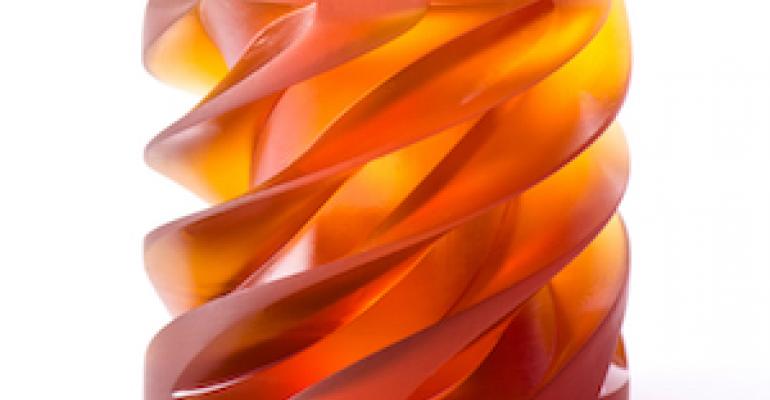 The 3D-printing technology developed by Carbon (Redwood City, CA) has grabbed the attention of plastic parts manufacturers because it enables printing speeds that are up to 100 times faster than current additive manufacturing methods. Beyond introducing a new technology, CEO Joseph DeSimone believes his company’s innovation could open the door to new business models by offering manufacturers unprecedented efficiencies and savings.

The company calls its technology continuous liquid interface production, or CLIP. DeSimone has a simpler way of describing it, explaining that the Carbon process uses light and oxygen to shape a part as it emerges from a pool of resin. The company says this approach to 3D printing permits a faster, continuous process that produces parts matching the quality of injection-molded plastics.

“With light as a chisel, we are able to manufacture parts that previously weren’t manufacturable,” DeSimone said, speaking recently at the CED TechVenture conference in Raleigh, NC.

Right now, companies currently keep billions of dollars worth of parts in inventory, DeSimone said. Even when parts are ordered in a “just-in-time” manner, the supply chain still needs time to deliver inventory to a site. Current 3D-printing technology is too slow to be used for more than prototyping parts, he added. But the capability to print parts on demand at high speed makes 3D manufacturing possible, and that has significant ramifications for the supply chain. Carbon believes that its 3D-printing technology will enable manufacturers to make parts only as they are needed, reducing cost and the need to stock inventory.

Carbon launched its 3D printer, called the M1, in April, as PlasticsToday reported. DeSimone’s keynote in North Carolina offered an update on the company’s progress; notably, he told the audience that he envisioned multiple Carbon manufacturing sites for the M1 beyond the company’s Silicon Valley headquarters. His talk turned out to be a preview of the company’s big news: $81 million in new corporate and venture investment to ramp up production of the M1 to meet expected demand. The latest investments bring Carbon’s total funding haul to $222 million.

While Carbon’s process offers a faster alternative to current 3D-printing methods, DeSimone credited Alan Mulally, the former Ford CEO and current Carbon board member, for recognizing the potential of Carbon’s technology to offer on-demand manufacturing. Carbon is building a business model that borrows concepts from other industries and adds a twist to the subscription pricing model widely favored in software. Rather than selling its 3D printers, Carbon leases them– “hardware as a service.” The company does sell resins, and the M1 printer currently works with five materials: Rigid and flexible polyurethane, elastomeric polyurethane, cyanate ester and a general purpose prototyping resin. Carbon is setting up an app store where customers can shop for resins and accessories. DeSimone said Carbon is also working with vendors on securing additional resins.

In the funding announcement, Carbon said details about manufacturing projects using its technology would come next year. But the new investors include automotive and electronics companies, a sign of where Carbon sees its technology finding use in the near term.