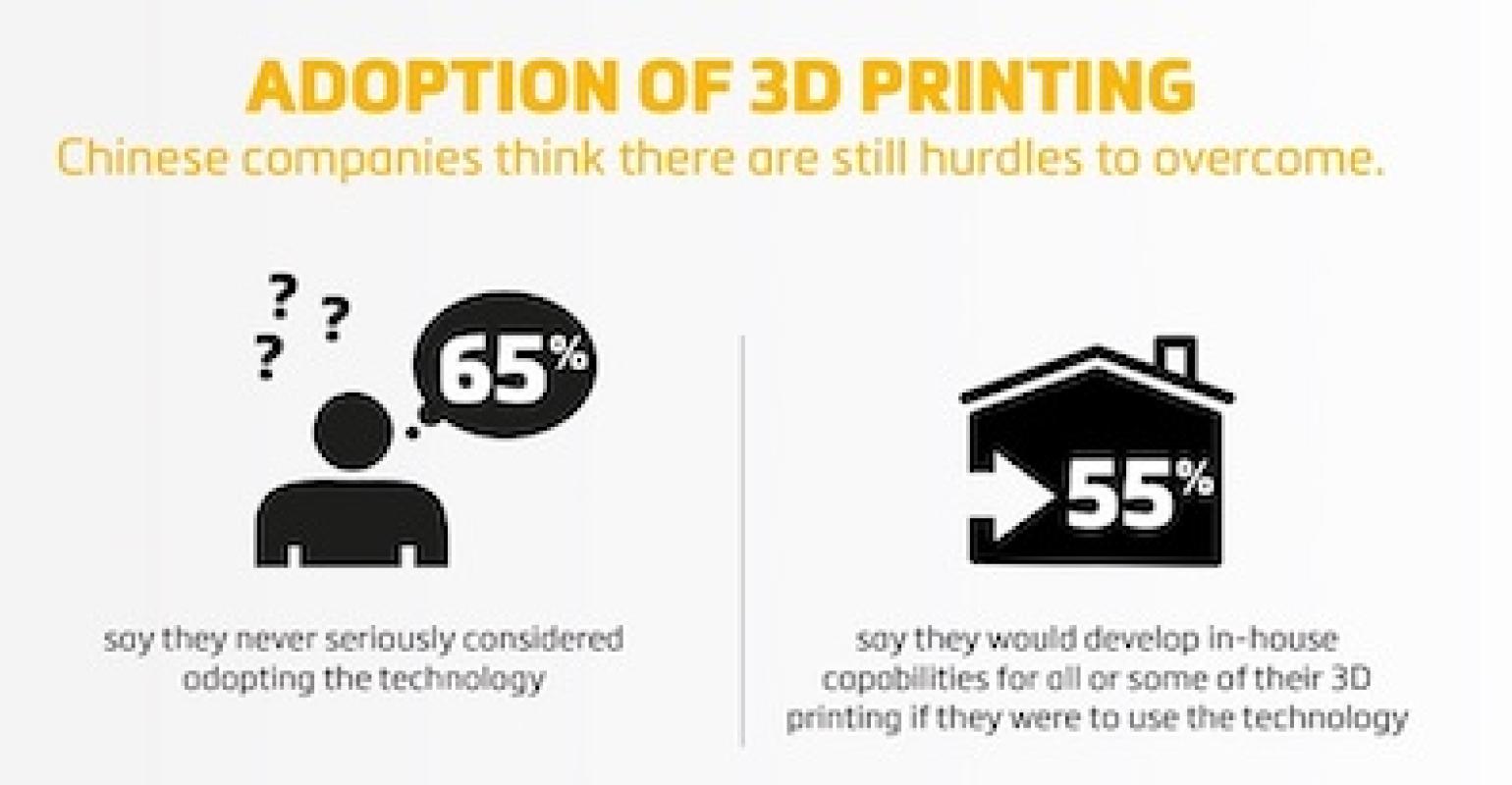 The vast majority of manufacturers surveyed continue to view the technology through a prototyping lens. Only 11% consider it to be ready for the production of end-use products.

We are approaching the halfway mark of the Made in China 2025 initiative. Announced in 2015, the 10-year-plan’s goal is to turn the modern-day “workshop of the world” into an advanced manufacturing powerhouse. Do Chinese manufacturers see 3D printing as an essential enabling technology in this transition, wondered Materialise, the 3D printing technology company based in Leuven, Belgium. It conducted a survey to find out, and the results reveal some ambivalence.

Made in China 2025 “called for domestic companies to control not just Chinese markets, but also global ones,” reported the PBS show Frontline, by focusing on 10 key sectors, including automation, artificial intelligence and renewable energy. 3D printing as a complementary manufacturing technology is a key element in this transition, according to Stefaan Motte, Vice President and General Manager of the software division of Materialise. “China understands that it needs to lift the game on its manufacturing competitiveness to face increasing competition and to move away from being the world’s low-cost workshop. 3D printing plays an important role in this plan,” writes Motte in a blog post inspired by the survey.

While 30% of respondents believe that 3D printing is destined to be “as important” or “more important” than traditional manufacturing technologies, the vast majority continue to view the technology through a prototyping lens. It’s mature enough for the production of visual prototypes (63%) and even functional prototypes (34%), said respondents, but only 11% consider it to be ready for the production of end-use products.

While half of Chinese manufacturers surveyed said that the global adoption of 3D printing could challenge China’s position as a manufacturing leader, only 15% of them are considering adopting 3D printing technology. Moreover, 65% of respondents have never seriously considered using the technology. A lack of technical expertise was cited by 41% of respondents as a major hurdle in adoption of the technology. And that is where Motte sees an opportunity for companies like Materialise.

“The main hurdle that China will have to overcome to meet the government’s [Made in China 2025] target is getting companies to understand how to work with the technology,” writes Motte in his blog post. One means to that end is for companies to partner with 3D printing leaders to “gain the expertise needed to impact the market. We strongly believe in the process of co-creation to combine our knowledge of the technology with a company’s expertise in its field to make industry-changing innovations,” said Motte.

The infographic below provided by Materialise highlights several findings from the survey.

The survey was commissioned by Materialise and conducted by Beats Group in August 2019. Executives, technical managers and senior technical staff at Chinese manufacturing companies participated. Materialise did not release the sample size of the survey.