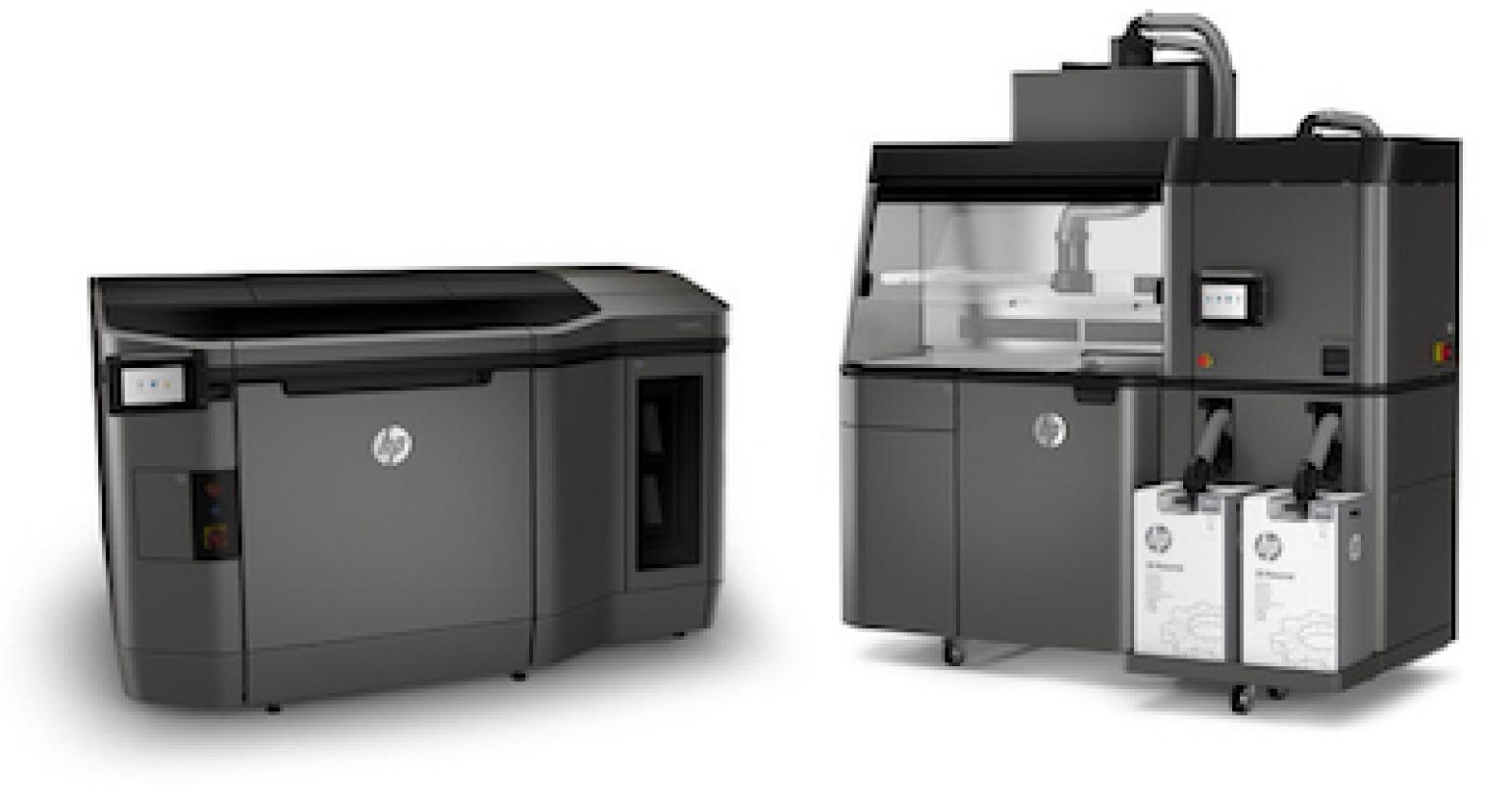 Using a 3D printer to produce parts for a 3D printer is just one example of how far the additive manufacturing industry has come over the past three decades. That’s what manufacturing solutions provider Jabil (St. Petersburg, FL) is doing for HP Inc. (Palo Alto, CA), which is rapidly scaling its 3D printer business. The primary benefit of 3D printing is faster time to market and a dramatic cost reduction in parts, which includes the cost of having to build molds and perform multiple design iterations.

Jabil currently uses HP’s Multi Jet Fusion (MJF) 3D-printing technology to produce 50 tested and validated parts for HP printers. This has enabled the company to achieve break-even points at up to 40,000 units on some parts, while completing 18 design iterations in the time it normally takes to make one prototype. Production 3D printing of plastic components is the goal for many OEMs, but Jabil and HP seem to be making major headway in this effort.

According to John Dulchinos, Jabil’s VP of Digital Manufacturing, 3D printing of metal has made sense for production parts in high-value segments, such as transportation (aerospace and high performance automotive) and medical. “These industries value parts with optimal geometry and better performance, which comes with 3D-printed metal parts,” Dulchinos told PlasticsToday. “Plastic typically doesn’t have that kind of opportunity.”

While aerospace presents opportunities for 3D printing of plastic parts, the economics and applications are very different when it comes to metal parts. For example, Dulchinos explained that 3D-printed plastic parts tend to be located inside the airplane cabin. Additionally, “3D plastic parts are cheaper than metal parts because the upfront design and secondary processes are less costly,” he said. “This allows them to be used in a wider set of applications.”

Reducing the unit cost of plastic parts, including the mold, is a big goal for OEMs. “We’ve seen the first solutions that take classic 3D printing to a level that changes the economic equation to something meaningful—tens of thousands of parts now, rather than a few dozen or hundreds.” explained Dulchinos.

Jabil is looking to take additive manufacturing to a broad set of industries and attain volume levels that are competitive with injection molding and other traditional manufacturing processes. “In the next few years, we will see applications with 100,000 units as a break-even point and 3D printers with a level of output that will allow us to scale production volumes.”One of the real assets in leveraging powder-based 3D printing is the ability to take a part designed for injection molding and run it on the 3D printer without making any design changes to the part. “This allows us to take these 50 parts designed for other manufacturing processes, run them on the 3D printer and qualify the capabilities of the molding process and the 3D-printing process,” said Dulchinos. “We then characterize them against the functionality of the part in its application and determine whether the 3D-printing process can be suitable for that particular application. The part characteristics are very close, so often we can validate the subtle differences in the parts and use 3D printed and injection molded parts interchangeably.”

3D printing also allows Jabil to make test, prototype and performance parts without the use of tooling. Tooling still plays an important role at Jabil, as the company has 3,000 injection molding machines along with in-depth tooling capabilities. “We understand the nuances of what molding offers and what traditional manufacturing can offer, as well as how and when to apply it,” said Dulchinos. “This gives us a level of impartiality and enables us to select the best manufacturing solution for the customer and a particular application.”

While there has been some big publicity regarding the scaling of 3D printing of plastic parts—in some cases as much as tens of thousands of units—Dulchinos noted that Jabil remains “pragmatic” at this point. “If it takes a ton of factory space with dozens of machines, the capital expenditure and the performance of some 3D printing processes may not scale well and you can’t get to the desired volumes,” said Dulchinos. “We know that 3D printing holds tremendous promise—given the money spent on customization of tools, molds, fixtures—to accomplish all that without tools, molds, and fixtures.”

Where 3D printing becomes practical is when the technology is distributed. As a large, global manufacturing company, Jabil understands scale at a level that few companies do. “We can run a true distributive manufacturing operation,” Dulchinos added.

For instance, in the printer example, Jabil performs process development and pilot building of parts in Silicon Valley, but the ultimate destination for the 3D-printed parts is Singapore, where the volume production operation is set up. Volume production manufacturing can be transferred from Silicon Valley to Singapore just by moving digital files. “This gives us tremendous flexibility and agility, and we’re not investing in tooling and molds that we have to ship to other theaters of operation,” said Dulchinos. “We’re just setting up machines and moving files.”

Dulchinos confirmed that 3D printing is not the answer to everything. “When I look at the molding universe, I know we’ll be in the single digits for 3D printing compared to injection molding for quite a while,” he said. “However, it opens the door to applications in which we can take a three-, four-, five- to 10-piece assembly and print it in a single piece. That gives us a firm break-even point coming out of the printer, because we’re saving money on assembly and secondary operations. It also gives us more favorable economics versus injection molding.”

In fact, HP believes it’s possible to achieve a cost saving of up to five times with 3D printing by integrating functionality and eliminating assembly costs.

Jabil is a high-volume molder for medical, consumer, and packaging applications. Compared to that environment, 3D printing is a low-volume, niche technology.

“We’ve been using 3D metal printing for a number of years to make conformal cooling channels in the molds to make us a more efficient molder,” Dulchinos said. “We can save 25 to 30% on the cycle time by optimizing cooling channels.”

Jabil also makes prototypes prior to cutting mold steel, and manufactures fixtures to optimally build assembled parts. Beyond that, the real value proposition, according to Dulchinos, is the ability to do small lot runs of parts that don’t require tooling, as well as to produce parts with unique geometries that you can’t do with other manufacturing processes. “We can create geometry in aerospace parts that allow planes to fly with less weight,” he said. “It’s the same with performance automotive parts—we can get optimal shape and less weight.”

The HP printer program that uses 3D printers to print functional parts is a big leap forward for Jabil and HP. With 3D printing, a part that once cost $20 to make, now costs less than $6 and is 70% lighter. Jabil and HP are using 3D printing to revolutionize the $12 trillion manufacturing industry.