Metal 3D printing appears to be catching on much faster in production environments than 3D printing with plastics. That is probably due to the fact that subtractive metal fabrication, as used in moldmaking, is a much slower process than the injection molding of plastic parts, particularly those from multi-cavity molds. Growth in 3D metal printing has been fairly strong for this process, as shown by one company.

SLM Solutions Group AG (Lübeck, Germany), a supplier of metal-based additive manufacturing technology, confirmed its current-year corporate forecast and announced the conclusion of a successful first half of 2015.

SLM CFO, Uwe Bogershausen, commented: "Compared with the previous year, we report significant growth in our revenue during the first six months of [2015]. This growth is all the more pleasing considering that the first half of the year tends to be weaker, and we anticipate most of our business in 2015 to be realized toward the end of the year. On a full-year view, we continue to project new order intake of more than 100 machines." 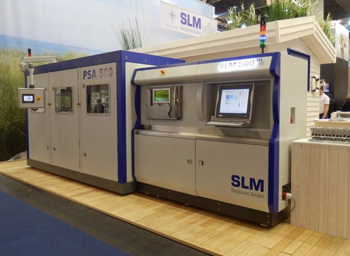 Linear Mold & Engineering (Livonia, MI) has been using the metal 3D process in its moldmaking business for more than 10 years, and this summer took delivery of two dual-laser SLM machines from SLM Solutions. As an early adopter of this technology, Linear Mold currently operates 14 3D metal printing machines, most of which are dedicated to production parts. However, Linear's conformal cooling business for moldmaking, which also uses the 3D metal printing technology, is also experiencing an uptick in demand.

Linear Mold's John Tenbusch commented recently: "Some of the SLM machines will be dedicated to conformal cooling technology," noting that as conformal cooling gains greater acceptance among OEMs, particularly those in the automotive industry, demand increases.

"The conformal cooling work is starting to pick up as customers take a serious look at this technology," Tenbusch said. "First, they have to gain acceptance of what it can do, and for that they run their own tests and trials on the technology. However, a number of them have moved past the trial stage now and are looking for applications that are a perfect fit."

Dr. Markus Rechlin, CEO of SLM Solutions Group, explained business trends for his company: "Focus on the core of our business with selective laser melting technology is paying off. Key sales revenue drivers include a high number of new orders from existing customers, and many multi-machine orders from industrial customers as well as contract manufacturers. Our new order intake also reflects a greater proportion of multi-laser machines that achieve greater build speeds for manufacturing environments. The after-sales business, which also includes metallic powders, comprises a further strategic focus."

"The global market for additive manufacturing has grown by an average of 34% over the past years, and it is set to reach a level of $22 billion by 2020, according to sector experts," added Rechlin. "We aim to grow at least as fast as the market and, better yet, would like to outpace this growth on a regular basis. In such a dynamic market environment, we do not think it exaggerated to speak of a new industrial revolution. We aim to continue to shape and design this revolution as a technology leader."