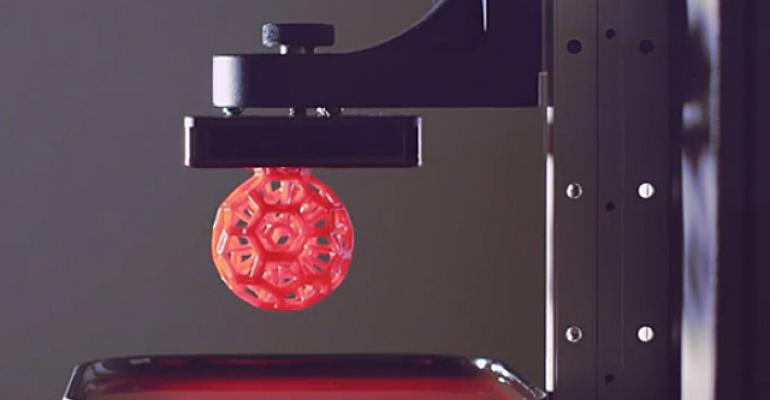 Remember how the T-1000 robot in Terminator 2 would constitute itself from a puddle of mercury-like liquid? That's what inspired a new 3D-printing technology developed by Carbon3D (Redwood City, CA). It could represent a quantum leap for 3D printing, producing solid final parts 25 to 100 times faster than current technology. Stents and false teeth printed while you wait are among the medical applications envisioned by the inventors.

Continuous Liquid Interface Production (CLIP) technology uses finely tuned light and oxygen to continuously grow objects from a pool of resin, rather than creating them layer by layer, as conventional 3D printing does. Carbon3D CEO and co-founder Joseph DeSimone demonstrated the machine at this week's TED (Technology, Entertainment and Design) conference in Vancouver, BC, Canada, where it printed a plastic ball from a pool of resin in 10 minutes, reports BBC News. "It would traditionally take up to 10 hours to print this," DeSimone told the audience. "There are mushrooms that grow faster than some 3D-printed parts," he joked. A paper on the technology was published simultaneously in Science on March 16, 2015.

By carefully balancing the interaction of UV light, which hardens the resin, and oxygen, which inhibits hardening, CLIP technology rapidly transforms 3D models into physical objects. These are not prototype parts: Commercial-quality objects are produced with consistent mechanical results from a range of polymeric materials, says the company. And it does that in a fraction of the time of conventional 3D printing. Currently, Carbon3D estimates that it accelerates printing by 25 to 100 times, and it has the potential to be 1000 times faster.

According to DeSimone, the breakthrough came partly from reconsidering the technology from a non-mechanical perspective. "We think that popular 3D printing is actually misnamed—it's really just 2D printing over and over again," he told the Washington Post. "The strides in that area have mostly been driven by mechanical engineers. We're two chemists and a physicist, so we came with a different perspective." DeSimone and company co-founder Edward Samulski are professors of chemistry at the University of North Carolina and North Carolina State. The physicist is Alex Ermoshkin, CTO.

Carbon3D has secured $41 million in funding from venture capital firms, and several printers are being tested in the field by an auto maker and athletic apparel company, according to BBC News. The printer may be commercially available within a year, says Carbon3D.

Watch the video below to see the technology at work.