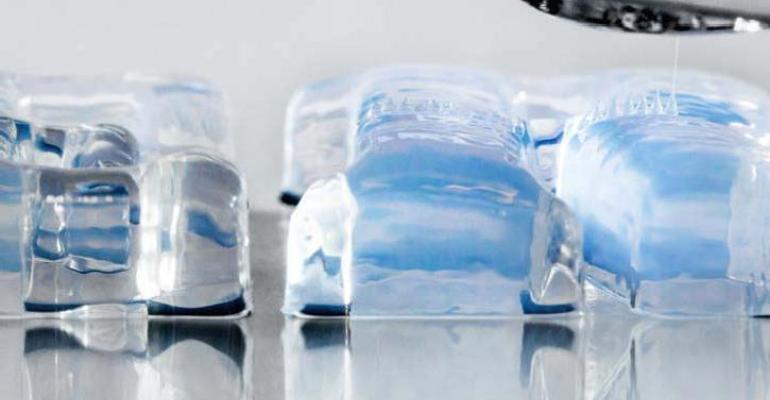 3D printing is a technology with a great future. It is used by companies, product developers and designers to manufacture spare parts, prototypes and much more. But the range of materials has been limited. So far, it has only been possible to print thermoplastics, glass, ceramics, and metals.

Now, however, materials supplier Wacker (Munich, Germany) has developed a method that also allows silicone components to be produced by 3D printing. A robot deposits tiny droplets from a nozzle side by side, to build up the article layer by layer. Then the silicone is vulcanized with UV light.

The homogeneous objects that are produced have virtually smooth surfaces. The material is biocompatible, heat resistant and transparent - opening up new industrial applications in automotive manufacturing, medical technology, household appliances, and optics. Experts are predicting a huge market for 3D printing with silicones.

The marathon, a race of 26 miles and 385 yards, is a real challenge every time for Maximilian Peter, a doctor of chemical engineering and Wacker employee. Besides being physically fit, it is also necessary to have the right gear, in particular well- fitting running shoes. This gave him his idea: shock-absorbing insoles, custom-made to conform to his feet. "There's nothing like that available yet," says the impassioned athlete, "but we're on the home stretch."

Together with his colleagues at Wacker Silicones and the engineers at enders Ingenieure GmbH, a product development and prototyping company based in southern Germany, he developed the solution: three-dimensional printing of silicone. It represents a breakthrough in additive manufacturing - the technical term for 3D printing. "Until now, it had been impossible to print elastomers - i.e. rubbery materials. There were just no suitable processes available," explains Dr. Bernd Pachaly, head of silicones research at Wacker Silicones.

Silicone parts could only be produced by expensive injection-molding processes. Because of the costs for custom-making the molds, the process is only worthwhile for large production runs - not for a single pair of insoles. "Injection molding is the established process for series production, and will remain so," says Pachaly. "But people who design prototypes or only want to make a few copies of a part can now very rapidly and flexibly produce such small series, modifying them constantly to meet changing demands. That is the unique advantage of the process."

Experts estimate the global market for additive production for 2014 at about $3.8 billion, with robust growth rates of 30 percent and more per year. Less than half of that is for the hardware, i.e. the printer and materials. Services such as product development and customer solutions are an even more important market according to a recent market study by Wohlers Associates.

Researchers and entrepreneurs in the US have long recognized the trend toward additive manufacturing. There are already 150,000 printers there - even children in elementary school are experimenting with them. Germany is lagging well behind. True, politicians in Hamburg committed the state government there to a 3D printing strategy in April 2015, but there is no strategic promotion on a federal level, as was recently noted by the German government's "Expert Commission for Research and Innovation."

The Association of German Engineers (VDI) also sees need for action. In their Additive Manufacturing Processes status report in fall 2014, the experts called for more printable materials, more efficient machines and greater integration and automation of the processes.

It is precisely these topics that Wacker and the engineers at enders were already pursuing together. It was clear that 3D printing of silicone required a fundamentally new approach.

Silicone is not melted by heat in the same way as thermoplastics or metals. It cannot simply be applied layer by layer as a powder, and melted by laser beam to the desired three-dimensional shape. The experts eventually opted for a process that they developed in just one year. The result is impressive. It all takes place in a glass case containing the workspace and a robot. The machine is equipped with a nozzle, which rapidly deposits one droplet of silicone at a time on a base surface. Not just anywhere, but at exactly the point governed by the computer file with the design software - just like inkjet printing on paper.

The developers couldn't use an off-the-shelf solution to control the robot. "A key step in the development work was to write a custom program," says Florian Ganz, CEO of enders. Pachaly reckons the work truly paid off: "It is the first really user-friendly software in this field."

The robot regularly pauses and a UV beam scans over the tiny drops, which have merged into a fine line. The silicone then vulcanizes in less than a second in the UV light, crosslinking the molecules into an elastomeric material. The robot then applies the next layer of silicone droplets. Thanks to the vulcanization, a homogeneous object is formed because, after being applied, the viscous material immediately bonds to the layers immediately adjacent to or below it. Currently, a relatively small component can be formed in around 15 minutes. In the long term, the developers want to process about 100 grams of silicone per hour - which would apparently be fast enough for any conceivable application.

Since the structures generated by the robot are extremely fine, the precision is impressive. The silicone strip deposited is about 0.6 millimeters wide, and only half as thick. That makes it possible to produce extremely precise contours and results in a surface that is almost smooth and is pleasant to the touch. "The roughness may be even better than 100 micrometers," says Pachaly. That is hardly a hair's breadth, and significantly smoother than printed thermoplastics.

The pieces look almost like injection molded components. To achieve this, Dr. Ernst Selbertinger, a silicone developer, had to create a formulation that can be dosed as tiny liquid droplets that immediately remain stationary at the place they were deposited. "Think of toothpaste - it flows under pressure as you squeeze it from the tube, but it is firm when on the brush," explains the chemist who won't disclose any details about the mixture - only that it contains a platinum catalyst that is responsible for crosslinking the molecules under UV light.

3D printing is much faster than conventional technologies for manufacturing small series and one-off articles, such as prototypes and spare parts for the many silicone elements contained in every car: plugs, hoses and the like. "In the auto sector, it will no longer be necessary to keep costly and complex stocks of silicone parts," states Pachaly.

The medical sector is also interested in the material for its biocompatibility. For example, implants could be custom-made for the patient, even during an operation - based on data provided by technologies such as magnetic resonance imaging (MRI).

Custom-made silicone respirator masks and hearing aids will soon be manufactured by 3D printing. And every wearer of eyeglasses will welcome nose pads that really fit. The optician will only need to scan the three-dimensional contour of the nose and read it into a 3D printer, which will then produce a perfectly fitting pad. In the home, it will be possible to produce baking molds bearing the customer's name. Silicone is famously heat resistant.

Because it is also valued for its transparency, the researchers  are also devising optical applications, such as lenses printed to order. And last but not least, individually manufactured   insoles for running shoes. There is a huge market for printed silicone - the developers are in no doubt about that.

"We have a lot of ideas, and we want to provide our customers with much more than just silicone for additive manufacturing," says Pachaly. That means a company that wants to print a product from silicone no longer needs to develop a new process at huge expense. In the near future, Wacker will be able to take care of the system solution, which means providing a suitable machine and the appropriate software - and thereby offering its customers new kinds of services. "It will no longer be enough to drop off drums of chemicals in front of the factory hall," says the innovation manager. In the future, added value will be mainly achieved through comprehensive, customer-oriented solutions. And 3D printing of silicone is an ideal solution.

Note to reader: This article is an edited and abridged version of a feature provided by Wacker.