If you've ever wanted to see oceanic plastic pollution up close and personal, the 5 Gyres Institute, a global plastic pollution research organization, has a trip you won't want to miss. The institute has launched an online contest for those who want to learn first-hand about the problem and help drive solutions. The winner will be invited to join the final leg of 5 Gyre's June research expedition to the North Atlantic Ocean.

If you've ever wanted to see oceanic plastic pollution up close and personal, the 5 Gyres Institute, a global plastic pollution research organization, has a trip you won't want to miss. The institute has launched an online contest for those who want to learn first-hand about the problem and help drive solutions. The winner will be invited to join the final leg of 5 Gyre's June research expedition to the North Atlantic Ocean. 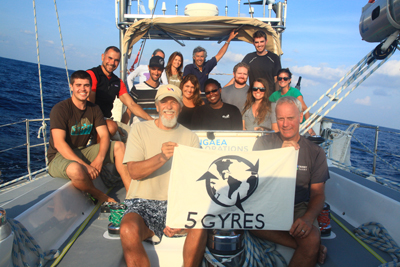 The final, six-day leg of the voyage will traverse the North Atlantic subtropical gyre, where, the organization says, "plastic pollution collects in high concentrations." The ship departs St. George's, Bermuda, on June 18 and arrives in New York City on June 23. Contestants will be asked to submit a short video describing what they'll do after the trip to solve plastic pollution locally.

The expedition is a working adventure (not a pleasure cruise) aboard a 167-foot schooner, the Mystic. All of the crew will have the opportunity to participate in every aspect of the voyage, from ship navigation and handling to daily research efforts to document plastic pollution floating on the ocean's surface. Expedition contestants must be at least 18 years old.

An ocean gyre is any large system of rotating ocean currents, particularly those involved with large wind movements. On April 13, 2015, a research report written by Dr. J.A. Van Franeker and K.L. Law was published: "Seabirds, oceanic gyres and plastic pollution." Van Franeker is a researcher with IMARES Wageningen UR, an institute in the Netherlands that concentrates on research into strategic and applied marine ecology.

IMARES has been monitoring and conducting studies of marine ecology for 30 years, specifically on plastics in stomach contents of northern fulmar birds in the North Sea. "However," writes Van Franeker, "one other dataset of comparable duration exists: the Sea Education Association from Woods Hole in the USA has a long-term study using surface nets to measure the accumulation of debris in the plastic soup of the North Atlantic garbage patch. Comparison of these two unique datasets in the scientific journal Environmental Pollution provides remarkable insights."

Van Freneker notes that the North Sea is considered one of the "source areas" for plastic debris in the oceans because of wind and currents that make it a catch-basin for debris coming from various other areas. "Without constant addition of new waste, the North Sea would clean itself rapidly," and the study provides a "detailed account on how stomach contents of fulmars (a gull-sized gray and white seabird of the petrel family) reflect a changing pattern of pollution in the area," he says. "In the long run, there appear to be no major changes in the overall plastic mass present, but the composition changed significantly. Industrial preproduction pellets have strongly decreased over the years. However, variable quantities of consumer plastics have taken over and have somewhat obscured the underlying patterns."

When it comes to the North Atlantic garbage patch, the densities of plastics in this "soup" show "remarkably similar trends," says Van Freneker. "Whilst one might expect that continued losses of plastics in source areas would lead to continued accumulation in the center of oceanic gyres, this cannot be detected in the North Atlantic gyre. Plastic density does not clearly indicate an increasing trend. Looking at the data in more detail, it shows also that the densities of industrial granules sharply decreased, just as in the fulmars."

The study shows that a reduction of plastic waste in source areas (for example through North Sea fulmars) is reflected in the large oceanic gyres (such as the North Atlantic garbage patch). "In short, this implies that if we manage to avoid new pollution, the oceanic garbage patches will rapidly disappear," Van Franeker says.

While this may appear to be good news, Van Franeker states that "it also shows clearly that the oceanic garbage patches are no more than a temporary reflection of plastic debris in the ocean with apparently very different final destinations." And, he notes, a lot of different things can happen to the plastic debris such as sinking, washing up on beaches, or breaking down into small bits, and be eaten by seabirds.

There are some discrepancies in the figures regarding the amount of plastic debris entering the oceanic gyres, which Van Franeker points out. "A recent study calculated that globally at least 5 million tons of plastic debris enters the oceans from land-based sources. However, the global amount of plastic floating around our seas has been estimated at ‘only' a quarter million tons. So only about 5% of what is annually added is from land-based sources. The strong discrepancy between these figures will remain problematic, but the study published now shows that processes are at work that at least offer some partial explanation."

Van Franeker admits that the findings in the recent study "reflect mainly how little we know about this type of pollution of our oceans and, thus, of potential consequences for wildlife and man. In that situation, the wise approach may be to avoid further risk by stopping losses of plastics into the sea."

This study from IMARES also shows that the plastics industry is making great strides in preventing preprocessed pellets from entering the oceans via land-based waterways—something that has been a huge effort in the United States, particularly along the West Coast. That is a good thing and something that we can be proud of as an industry.

However, the study also shows that much of the processed plastic products are being thrown into the oceans by uncaring litterbugs, who find it more convenient to throw their perfectly good recyclable plastics overboard than bringing them back to shore and finding a recycling bin.

Maybe the people aboard the Mystic on the 5 Gyres trip can also keep an eye out for these litterbugs, who are throwing plastic recyclables into the ocean and creating the garbage patch. They can then make a citizen's arrest and haul these people back to shore where they can be fined and perhaps punished by being put to work in a recycling facility sorting plastic!

An extended PDF of the full study is available for download.