Axel Plastics Research Laboratories (Woodside, NY) said MoldWiz INT-PA33FRK and INT-38F address the key challenge in such parts of adequate flow and cavity fill, since ties in particular are often thin in width while being quite long.

To compensate, Axel notes that many molders often push resin to the highest possible process temperature, approaching degradation point, to ensure that each mold cavity fills completely. Molding at the upper level of the resin's temperature range or above can impact physical properties and result in discoloration of the molded parts. 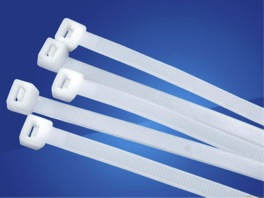 An injection molder running nylon 6.6 utilized the flow additives for a case study, loading at 3 parts /1000 based on weight with liquid or pellet feeders as appropriate. Both additives enabled resin to be injected on average 10°F cooler, and in addition to exhibiting good flow at lower temperature, crystalinity was also quite good, enabling the cooling cycle of the injection process to be reduced on average 12.5%. These factors contributed to an overall cycle time reduction that correlated to a 4-7% increase in the number of parts produced.

The flow additives were evaluated for impact on color in natural, or un-pigmented nylon and were considered to have no, or minimal impact. Tensile properties of the molded parts were also measured in both dry or freshly molded states, as well as in a conditioned state, after being exposed to elevated and extended humidity, for instance. Improved tensile values were achieved with both MoldWiz INT-PA33FRK and MoldWiz INT-38F when compared to parts produced with flow additives currently utilized.