At the recent IMDCON (In-Mold Decorating Conference), attendees heard much about advances in this technology. It was mentioned that perhaps the terminology for IMD should be changed to in-mold durables, given that much of what is called decorating has moved into what Marshall Paterson, Vice President, New Technology/Global Development Manager, Advanced Decorative Systems (ADS; Millington, MI ), calls the "third dimension."

At the recent IMDCON (In-Mold Decorating Conference), attendees heard much about advances in this technology. It was mentioned that perhaps the terminology for IMD should be changed to in-mold durables, given that much of what is called decorating has moved into what Marshall Paterson, Vice President, New Technology/Global Development Manager, Advanced Decorative Systems (ADS; Millington, MI ), calls the "third dimension." 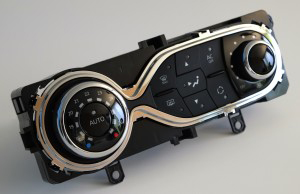 One of the vertically integrated manufacturing processes in which ADS specializes is 2D and 3D IMD for plastic components used primarily in the automotive industry. These include instrument clusters, HVAC controls, audio system bezels and switching components. The company also works in other segments. "The medical industry is a big user of IMD because of the perception of cleanliness," said Paterson. "It looks clean and is easy to clean, and we're doing some work with the electronics industry."

"Touch controls have become much more acceptable in the marketplace since the advent of the iPhone," said Paterson. "People are more open to interacting with touch screens, but they are perfectly flat; what we call 2D. We've spent years here at ADS making 3D products—the third dimension, which is not flat and boring. We are also adding a new dimension in terms of functionality."

Film insert molding (FIM) is a term created by MacDermid Autotype Inc., a company that specializes in supplying specialty hard-coating films for IMD, primarily for automotive cockpit applications. The FIM terminology hasn't really stuck, however, even though much of what is called in-mold decorating is, in actuality, FIM. Paterson noted that the term FIM is much more prevalent in Europe but is becoming better known in the niche applications it serves.

"We are seeing more interest in the automotive industry for in-mold decorating of durable products, but it takes a long time for that industry to adopt something and get it into production," Paterson explained. "The good thing is that, once in production, they run it for four to five years. The electronics industry is much faster to adopt the technology, but the product life is much shorter. A cell phone model, for example, is on the market eight to 10 months, and then the next model comes out. In that industry, you can get in quick but you're out quick, as well."

In the automotive industry, the rise of the touch screen was used to differentiate various makes and models of vehicles, since there wasn't much to differentiate them with the flat screen. "What the automotive design studios are doing is giving their vehicles a ‘wow' factor," said Paterson. "The cockpit of a Chevy must look different from that of a Ford. We provide a tool that the studios can use to give the vehicle a wow factor by moving away from black, which was the de facto color for the audio stack forever."

ADS also develops products that contain molded-in electronics and LED lighting such as backlit instrument cluster appliqués. "We're working on in-mold circuitry for PC boards—a sub-generation panel adding the electronics into the panel, which is the state of the art," said Paterson. However, he noted that there are two big challenges to this technology.

"There's the manufacturing or processing challenge, in that the electronic components have to withstand the heat and pressure of injection molding," he said. "There is also the commercial challenge, in that the quality of electronics is exacting for every part you mold. Circuits have to be in the right place after molding. If you in-mold a part with $10 to $20 of electronics equipment, scrap becomes a big issue. You have to have high yields or you're throwing away a much higher value item. Technically we can make the electronics survive the injection molding process, but can we have a high enough yield to make it economical to do that?"

ADS and the technology it has developed helps companies brand their products in unique ways. Perceived value is key in today's competitive marketplace, and Paterson noted that in-mold for the third dimension will be differentiating, functional and interactive to a greater degree than ever before.