First Chemical Recycling Program for Synthetic Turf Launched in US 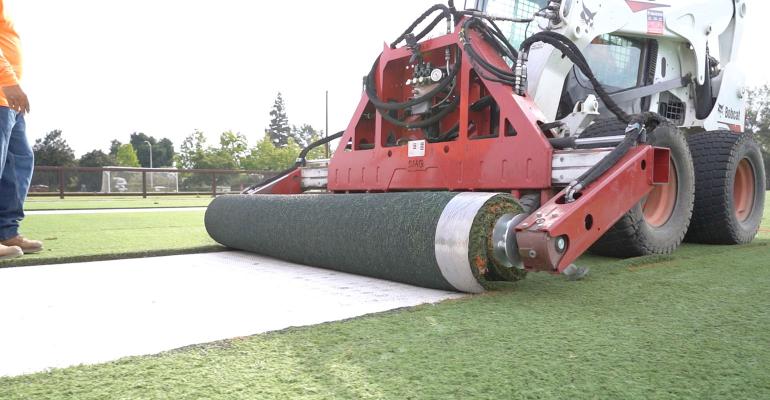 TenCate Grass, a manufacturer, distributor and installer of synthetic turf based in the Netherlands, will partner with Cyclyx International and ExxonMobil to establish what it says is the first program in the United States to chemically recycle artificial grass.

The goal is to help solve the long-time problem of how to efficiently and effectively recycle synthetic turf into feedstock that can be used to create new turf and other plastic products.

“This process of plastic recycling results in high-quality polyethylene pellets that will be used as feedstock for new products,” Joe Fields, President and CEO of TenCate Grass Americas, told PlasticsToday. “All prior turf recycling efforts have been downcycling turf, burning it to turn it into fuel or lower-grade recycled materials with limited uses.”

Known as TenCate Turf Recycling Solutions, the program will process 50 aged turf fields from high schools and college campuses and ship them to a Southern California facility where they will be shredded.

The shredded turf will be transported to Texas, where Cyclyx International will further pre-process the feedstock before sending it to ExxonMobil’s Baytown advanced chemical recycling facility. With ExxonMobil’s proprietary Exxtend technology, the turf will be broken down into raw materials that can be used to make new products that are similar in quality and performance to those made from virgin raw materials.

“Our current recycling partnership with ExxonMobil and Cyclyx is designed to handle fields made of primarily polyethythene," Fields told PlasticsToday, "and well over 90% of all installed synthetic turf fields nationwide fall into that category.”

“Our advanced recycling technology has already processed millions of pounds of otherwise difficult-to-recycle plastics, like food packaging and artificial turf, that are generally not recycled today,” said Dave Andrew, Vice President of New Market Development at ExxonMobil. “With our scalable technology and collaborations like this one alongside TenCate Grass and Cyclyx, we are helping to meet the growing demand for circular products.”

The program with ExxonMobil and Cyclyx builds on TenCate’s efforts to recycle synthetic turf. In its home base of the Netherlands, TenCate recycles its end-of-life turf into Ecocept, an elastic layer for sports fields. Third parties also use the agglomerated material to manufacture new products.

“We are committed to leading the industry and moving sustainability forward in a meaningful way,” Fields said. “We understand the issue of end-of-life synthetic turf, and we have taken it upon ourselves to find a true solution for the entire industry. Our goal is to keep turf out of landfills and put back to use.”

After this initial phase is complete, TenCate said it plans to expand the initiative across the United States. In North America alone, the total value of installed synthetic turf systems is estimated at $2.7 billion in 2020, according to the Synthetic Turf Council. This translates into approximately 265 million square feet of installed turf.

Many companies repurpose old turf for use in other applications, such as batting cages or groundcover, Fields said. But ultimately, this turf ends up in landfills.

TenCate’s program with ExxonMobil and Cyclyx will turn end-of-life turf into virgin-quality new products, he said. Through advanced, or chemical, recycling, the shredded turf will be broken down into its molecular building blocks, mixed with other hydrocarbon feedstocks, then made back into the raw materials used to create new products that are no different in quality and performance than those made from virgin natural resources, Fields said.

TenCate said it was the first synthetic turf supplier to join Cyclyx, a consortium-based company that works with partners throughout the supply chain to find innovative ways to collect and pre-process a variety of plastics to meet the specifications of both mechanical and chemical recyclers. Its mission is to increase the recyclability of plastic from 10% to 90%.