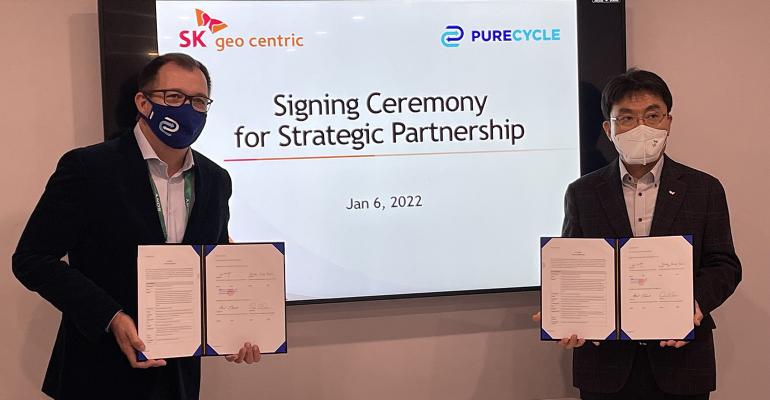 South Korean polypropylene (PP) producer SK geo centric (SKGC) and Orlando-based advanced recycling company PureCycle have signed a non-binding head of agreement (HOA), aka term sheet, to establish Asia’s first recycled PP plant. The facility in Ulsan, South Korea, which is expected to be completed by the end of 2024, is projected have an annual production capacity of 60,000 tons.

The two companies first entered into a business relationship in August 2021 with the signing of a memorandum of understanding. That was followed with a visit by SKGC President and CEO Na Kyung-soo of PureCycle’s R&D and demo plant in Ohio last November. At CES 2022 in Las Vegas last week, the companies agreed to key terms that will be included in the joint venture agreement that they will now negotiate.

PureCycle claims to be the only company with the proprietary technology to separate contaminants, odors, and colors from PP plastic waste and transform it into ultra-pure recycled (UPR) plastic. The technology can be used for commercial production and to recycle contaminated food storage containers, colored detergent bottles, and automotive interior plastic – which are mostly incinerated because they are difficult to recycle – into UPR, said the company.

The technology was originally developed by Proctor & Gamble, which licensed it to PureCycle. PlasticsToday’s Rick Lingle interviewed PureCycle Chairman and CEO Mike Otworth in April 2021, shortly after the company was listed on the Nasdaq stock exchange. In the interview, Otworth explains what feedtstock can and cannot be used in the process and the basic steps involved.

Commenting on the HOA, Otworth expressed his enthusiasm at “progressing toward opening a recycling facility in Ulsan over the next three years. Combining SK geo centric’s expertise and knowledge of the industry in South Korea with PureCycle’s patented technology that transforms plastic waste into a renewable resource, we can work toward tackling the plastic waste crisis that has impacted every corner of the world.”

PureCycle said that it will leverage its plant module construction processes and partnerships to accelerate plant construction in South Korea.