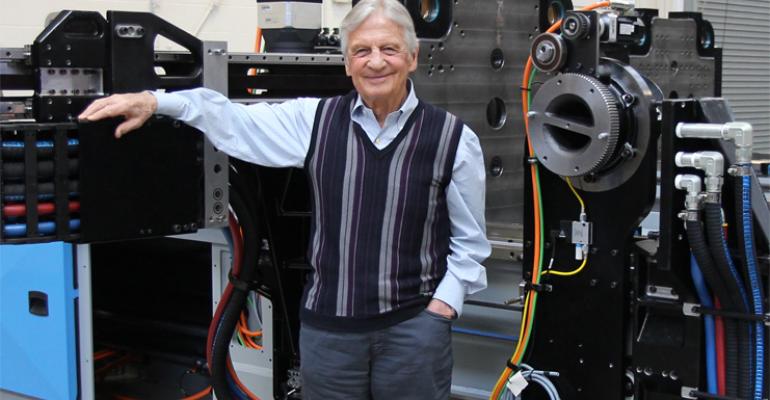 "I don't like to build what people want; I like to build what they need," Robert Schad told PlasticsToday upon the public debut of his new hybrid molding machine company, Athena Automation (Toronto, ON), at an open house coinciding with the recent Plast-Ex 2013 show (May 14-16; Toronto, ON).

"I don't like to build what people want; I like to build what they need," Robert Schad told PlasticsToday upon the public debut of his new hybrid molding machine company, Athena Automation (Toronto, ON), at an open house coinciding with the recent Plast-Ex 2013 show (May 14-16; Toronto, ON).

Most anyone in the plastics processing industry will recognize the name of the iconoclastic founder of Husky Injection Molding Systems, which the German-born Schad built into one of plastics' most dominant injection molding machine makers, especially in the PET preform and closures market.

If Schad sounds a bit like Apple's Steve Jobs he has good reason. The visionary, no-nonsense leader recognized the virtues of vertical integration early on, meaning Husky not only made injection molding machines, but also molds, hot runners, robots, and auxiliaries.

Schad eventually left behind the company he built after selling his majority stake in 2007 to Canadian private-equity investment firm Onex in a deal worth C$960 million overall. "It didn't work out to stay," he says simply.

But Schad found he couldn't leave behind what he'd been doing since founding Husky in 1953 as a small machine shop. Originally intending to build air-boats after Husky, his attention soon returned to the plastics processing machinery he knows so well, and the Athena concept was born in 2008.

"When I started, I set some very precise goals," he says of Athena. "I would either accomplish them or give up."

"The main idea is to build a simple, cost-effective platform with energy consumption similar to all-electric injection molding machines. It can now be automated with the features needed all built into the machine. It's simple to install, and can be customized very quickly and cost effectively," Schad says.

The Athena line utilizes servomotors in a hybrid platform to achieve repeatability and accuracy "as good as or better" than all-electrics while maintaining low energy consumption in part due to the active power supply that regenerates braking energy. The machines have a small footprint with large daylight and are quiet, operating at under 70 dB.

A clean-slate, and cleanroom-ready design philosophy are at the heart of the Athena approach. The machines are built on a one-piece base and feature distributed controls interconnected by a PowerLink bus. All machines feature 150 mm of floor clearance for easy cleaning. All service connections (water, air, vacuum, electrical) are located at the injection end of the machine. Services are pre-routed through the machine base.

Athena is partnering with SIPA in its PET solutions ("Athena for SIPA"), offering PET preform systems up to 96 cavities. PET systems are sold and serviced by SIPA under the XFORM brand. Athena will be on SIPA's stand at the upcoming DrinkTec and K shows. "The program is very beneficial to a lot of people," says Schad.

Athena currently occupies a 40,000-sq-ft facility that houses R&D, labs and assembly, with plans for a 150,000-sq-ft building sometime in 2015. The company currently has 58 employees.

"Now we have a nucleus that we can introduce," says Schad, "one platform for many different applications, including medical, closures, and preforms all on one platform. There are many excellent machines in the market, which are overkill. We've scaled it down to basics and added pre-engineered options to roll it out to different markets."

When asked what he envisions for the new company, Schad says: "Let's assume we win. I'd like to see a private company that my family is holding together with the employees."