Only 5% of Mid-Size Manufacturers Are Implementing Industry 4.0 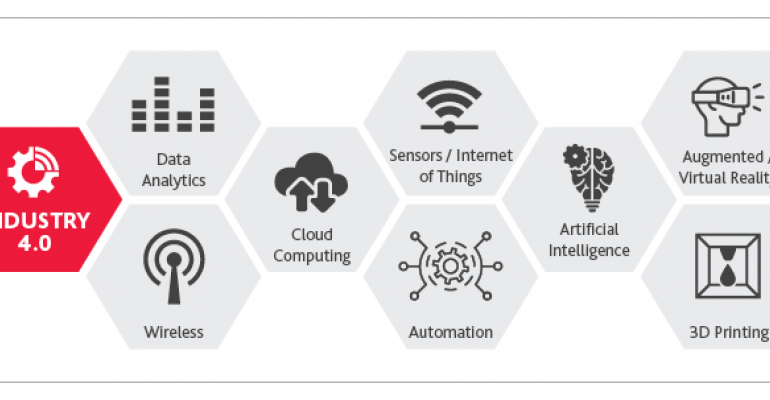 A new survey finds, in spite of competitive pressure, mid-size manufacturers are late in their build-out of smart manufacturing technology.

Industry 4.0 comes with a jumbled mix of lofty concepts and flashy technologies that can confuse rather than illuminate. But underlying the buzzwords are real-world applications that offer significant ROI.

The survey was conducted by Market Measurement, an independent market research consulting firm. Survey respondents included 230 executives at US manufacturing companies with annual revenues between $200 million and $3 billion and was conducted in November and December of 2018.

Here are the key findings of the survey:

Middle-market managers apparently understand that Industry 4.0 technology is crucial. A full 69% of the respondents said that failure to invest in Industry 4.0 will lead to encroachment from non-traditional competitors. “All you have to do to see the seriousness of digital change is look at what 3D printing is doing to the part manufacturing market,” Eskander Yavar, co-leader of BDO’s Industry 4.0 practice, told Design News. “It changes traditional logistics. They’re taking out a step in the supply chain. That’s an enabling technology that wasn’t available 10 years ago.”

2.) The Biggest Barrier to Implementation is Poor Communication

Two-thirds of the survey’s manufacturers view poor communication as the biggest barrier to Industry 4.0 implementation “That’s a great result,” said Yavar. “We found there’s high expectations from the c-suite about their company’s ability to implement 4.0 projects. Middle management, however, is less confident in 4.0 projects. The difference in perceptions is a problem.”

Nearly 60% of manufacturers plan to hire new talent to support Industry 4.0 enablement, while more than 60% are implementing training programs for current employees. “It’s a real priority, and it’s necessary to hire in order to support the technology,” said Yavar. “They’re starting to understand the resources they need to hire – not only for IT, but also on the OT side. They need people who understand the technology. They’re hiring university and college grads with digital familiarity. It’s a new generation of talent. Their OT team is not entirely ready, but there’re training and hiring to retrofit existing equipment.”

Only 6% of manufacturers claim they have transparency across their entire value chain. “It is a small figure,” said Yavar. “They’re trying to get the transparence in their own four walls before they extend out to suppliers and customers. This will start to change over the years. This is not a reflection of whether they realize the need. They’re just trying to get their own house in order first.”

5.) Finite Resources Can Result in Too Much Caution

The report noted that because their resources are finite, middle market manufacturers tend to be prudent in their Industry 4.0 investments. The possibilities of tomorrow must be tethered to concrete goals and a clear sense of purpose. The prudence may come at a cost. BDO notes that middle-market manufacturers have a limited window of time before Industry 4.0 technology become essential to competing in an ever-advancing digital world. They must master the art of balancing quick wins with longer-term, strategic investments or face dire competitive consequences.

In order to survive until tomorrow, these manufacturers must start their Industry 4.0 journey today, noted BDO. For the middle market, that means establishing an Industry 4.0 strategy that balances the long-term vision with realistic short-term goals and committing to continuous progress toward a more digital future.

In the report’s conclusion, BDO notes that Industry 4.0 is certainly real, and it isn’t going anywhere. To compete in an Industry 4.0 world, manufacturers need to embrace digitization, with the evolving needs of the customer at the center of everything they do. Those that embrace the fourth industrial revolution will reap the rewards, while those that don’t will quickly fall behind.

Rob Spiegel has covered automation and control for 19 years, 17 of them for Design News. Other topics he has covered include supply chain technology, alternative energy, and cyber security. For 10 years, he was owner and publisher of the food magazine Chile Pepper.