TuSimple's Autonomous Trucks Are Being Tested by the USPS 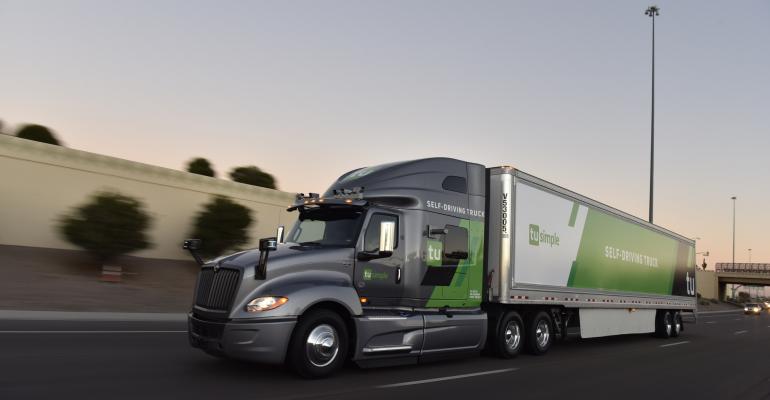 TuSimple has entered into a pilot program with the US Postal Service to test self-driving trucks for hauling mail freight.

If you happen to be driving down the I-10 and you pass what appears to be a self-driving mail truck, your eyes haven't deceived you.

Whether it's snow, rain, heat, or gloom of night, the United States Postal Service (USPS) is looking toward autonomous trucks to handle mail carrying.

San Diego-based self-driving truck company, TuSimple, has signed a deal with the USPS to conduct a two-week pilot in which TuSimple's trucks will haul USPS freight between the USPS' distribution centers in Phoenix, AZ and Dallas, Texas. This means the self-driving trucks will be sharing the road with other trucks and cars driven by humans.

“It is exciting to think that before many people will ride in a robo-taxi, their mail and packages may be carried in a self-driving truck,” Dr. Xiaodi Hou, Founder, President, and Chief Technology Officer of TuSimple said in a press release. “Performing for the USPS on this pilot in this particular commercial corridor gives us specific use cases to help us validate our system, and expedite the technological development and commercialization progress.”

During the pilot, which is currently underway, TuSimple's trucks will haul mail over 1000 miles and operate for 22 hours each, including overnight driving, along the I-10, I-20, and I-30 corridors – among the busiest freight corridors in the United States and ones which TuSimple anticipates will be central routes for itself due to demands from other customers.

Long-haul routes such as these are usually handled by teams of two (one for day and one for overnight). These are an ideal use case for self-driving trucks not only because of the level terrain but also because it eliminates the need for a second team. For the pilot project each autonomous truck will however have a safety engineer and drive onboard at all times to ensure safety.

USPS has been looking into ways autonomous vehicles can serve its needs for a few years now. A 2017 report released by the USPS Office of Inspector General outlined the potential benefits of self-driving vehicles for the Postal Service, as well as a plan for implementing them. The USPS believes autonomous trucks will reduce fuel costs, increase safe truck operation, and improve fleet utilization through longer hours of operation.

“To stay competitive, it is worthwhile for the Postal Service, one of the largest fleet operators in the world, to continue testing the technology and refining its transportation strategy,” the report states. “The Postal Service’s current multi-year effort to upgrade its fleet makes this an opportune time to start laying the building blocks for an [autonomous vehicle] future."

Founded in 2015, TuSimple is unique among self-driving truck companies in that it opted to go for a LiDAR-free approach to autonomous vehicles – foregoing the use of a technology that has become nearly synonymous with self-driving vehicles. In a previous interview with Design News TuSimple's Hou said the decision was based on safety considerations.  “For trucking, you're talking about an 18-wheeler driving 60-65 miles per hour on a highway. At that speed, you just can't stop the vehicle within 100 meters of braking distance,” Hou said. “There are claims that LiDAR can see over 200 meters, but it's not always guaranteed. Sometimes the LiDAR can only see about 100 meters or lower. It's not guaranteed that LiDAR can see everything at 200 meters.”

The report cites several factors contributing to the shortage, but chief among them was the high average age of existing truck drivers (49 years old), low levels of gender diversity (only 5.8% of truck drivers are female, according to the report), and a distaste for the trucker lifestyle – which includes extended periods of travel.

TuSimple is hoping that self-driving trucks will ease at least some of that burden in the coming years. “Over the next decade, the trucking industry will need to hire a total 890,000 new drivers, or an average of 89,000 per year,” the ATA report states. “Replacing retiring truck drivers will be by far the largest factor, accounting for nearly half of new driver hires (45%). The second largest factor will be industry growth, accounting for 33% of new driver hires.”