Demand for robotics will power manufacturing's next productivity surge 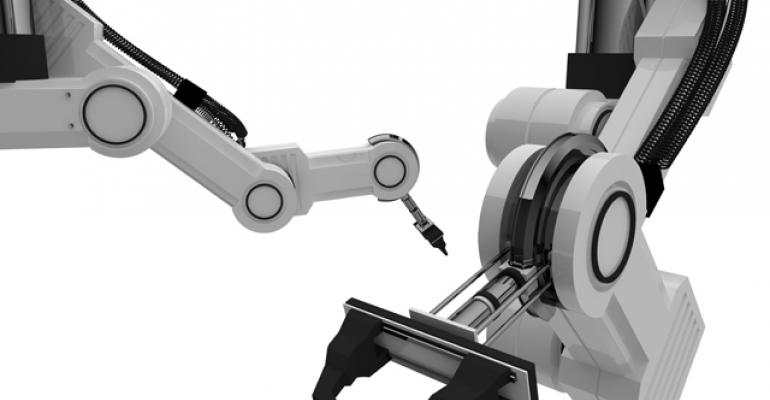 The use of advanced industrial robots is nearing the point of takeoff, a development that could power a new wave of productivity growth in many industries and lead to changes of­ up to five percentage points in the cost competitiveness of major export economics relative to the U.S., according to new research by The Boston Consulting Group (BCG).

The BCG study projects that investment in industrial robots will accelerate markedly over the next decade, from annual growth that now averages 2 to 3% to around 10%. As a result, the total cost of manufacturing labor in 2025 could be 17% lower, on average, in the world's 25 largest goods-exporting nations than they would be otherwise. Depending on the industry and country, output per worker could rise by an estimated 10 to 30% over and above productivity gains that typically come from other measures.

The biggest gains in labor savings will occur in nations that are at the forefront of deploying industrial robots, such as South Korea, China, the United States, Japan and Germany. Manufacturing labor costs in 2025, when adjusted for normal inflationary increases and net of other productivity measures, are projected to be 18 to 33% lower in these economies when advanced robots are factored in. In China, one of the world's largest markets for robots, greater use of automation could compensate for a significant part of the loss in cost competitiveness that is expected to result from rapidly rising factory wages and the growing challenge of finding manufacturing workers. Economies where robotics investment is projected to lag--and where low productivity growth is already a problem--are likely to see their manufacturing competitiveness deteriorate further over the next decade. Such nations include France, Italy, Belgium and Brazil, said the BCG.

"As labor costs rise around the world, it is becoming increasingly critical that manufacturers rapidly take steps to improve their output per worker to stay competitive," said Harold L. Sirkin, a BCG senior partner and co-author of the firm's series on the shifting economics of global manufacturing, introduced in 2011. "Companies are finding that advances in robotics and other manufacturing technologies offer some of the best opportunities to sharply improve productivity."

Although industrial robots have been used in factories for decades, robots currently perform only around 10% of manufacturing tasks that can be done by machines, on average, said the BCG study. By 2025, BCG estimates, the portion of "automatable tasks" performed by robots will near 25% for all manufacturing industries worldwide.

Several factors will contribute to this: Declining total cost of ownership is one. For example, the total cost of owning and operating an advanced robotic spot welder has plunged 27% from an average of $182,000 in 2005 to $133,000 in 2014. The price is forecast to drop by a further 22% by 2025. At the same time, the performance of robotics systems (their speed and flexibility, among other attributes) is likely to continue improving by around 5% each year. The combination of price and performance improvements will greatly accelerate the time it takes for robots to become more cost effective than labor in many industries.

"For many manufacturers, the biggest reasons for not replacing workers with robots have been pure economics and technical limitations," said Michael Zinser, a BCG partner who co-leads the firm's manufacturing practice. "But the price and performance of automation are improving rapidly. Within five to 10 years, the business case for robots in most industries will be compelling, even for many small and midsized manufacturers."

As robots become more affordable and easier to program, smaller manufacturers will use them on a wider scale. This will greatly expand the market for robots and integrate them more deeply into industrial supply chains, said BCG.

BCG's study estimates that manufacturers begin to ramp up investment in robotics when the costs of owning and operating a system reach a 15% discount over the cost of employing a worker. In industries such as automotive manufacturing in the U.S., where it costs around $8 an hour to use a robot for spot welding compared with $25 for a worker, that point has already arrived--and the cost gap will widen considerably in favor of robots. Similarly, in U.S. electronics manufacturing, it costs around $4 an hour to use a UR5 robot for a routing assembly task compared with $24 for an average worker.

China, the U.S., Japan, Germany, and South Korea account for nearly 80% of robot purchases, a share that is likely to hold steady for the next decade. The competitive position of South Korea, which is the most aggressive adopter of robots given its labor costs, is expected to improve most dramatically relative to other leading export economies, said BCG. In Japan, Canada, the U.S., Taiwan, the UK, and Germany, the savings could amount to at least 20% based on expected investment and industry mix.

A number of countries, however, have been relatively slow to adopt robots. Some slow adopters, such as Mexico and India, are unlikely to lose much competitive ground, because their costs are forecast to remain low for the next decade. But there are also a number of high-cost economies that are lagging in robot use, largely because of inflexible labor laws that make it difficult to replace workers through automation.

"It's ironic that in some countries where economic logic suggests that manufacturers should urgently convert to automation, they have instead been among the slowest to do so," noted Justin Rose, a BCG partner and co-author, along with Sirkin and Zinser ,of The U.S. Manufacturing Renaissance: How Shifting Global Economics Are Creating an American Comeback ([email protected], 2012). The BCG projections indicate that these economies are likely to see their cost competitiveness decline even further if nothing is done to address this trend.

Adoption will also vary by industry. The transportation equipment, computers and electronics, electrical equipment and machinery industries are expected to account for around 75% of advanced robotics installations through 2015. By that time, robots should be able to handle 30 to 40% of automatable tasks in these industries. Adoption will be slower in industries such as food products, plastics, fabricated metal, and wood products, where many tasks will remain difficult to automate and wages are relatively low. Thanks to technological advances, however, robots are making greater inroads in these industries, as well.

"Regardless of whether it's time to invest in next-generation robots, manufacturers everywhere should start preparing," added Sirkin. "They need to understand how costs and automation technologies are changing in their industries and what their competitors are up to. They also need to start training their workforces for new skills. The coming robotics revolution could significantly reshape the global manufacturing landscape."