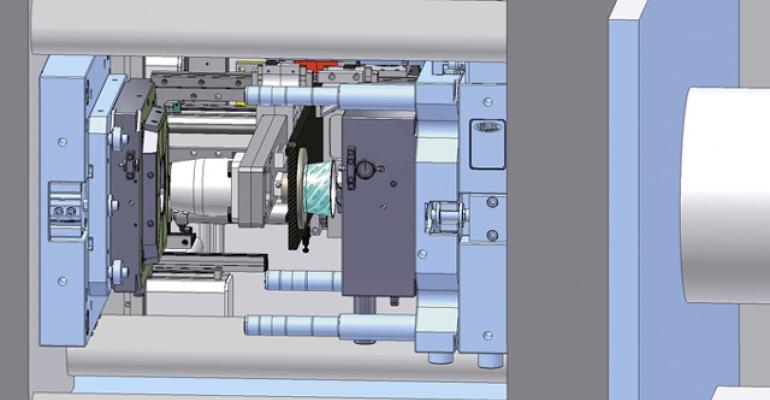 Sometimes you want to collaborate; other times, you want to keep things close to home. Mold builder and in-mold labeling (IML) automation specialist Müller (Conthey, Switzerland) did some of both on the recent SKET cup project that PlasticsToday reported on last month.

Sometimes you want to collaborate; other times, you want to keep things close to home. Mold builder and in-mold labeling (IML) automation specialist Müller (Conthey, Switzerland) did some of both on the recent SKET cup project that PlasticsToday reported on last month. The company is demonstrating its expertise at Fakuma in Friedrichshafen, Germany, this week, where it carved out a niche at the expansive Arburg stand.

To recap, the SKET cup is said to set a new standard in the injection molding of polypropylene (PP) packaging by reducing the amount of PP by as much as 50% compared with conventional products. Developed by Uniplast, part of the Knauer Group (Dettingen, Germany) and a leader in PP packaging for dairy products, with the collaboration of Müller, the SKET cup walls are only 0.22 mm thick, allowing the aforementioned reduction in material usage. The 0.7-mm-thick lip of the cup must be maintained at that thickness, however, and without defects. "It's important to produce lips without sink marks to ensure proper sealing," Müller told PlasticsToday from the Arburg stand. Spiral grooves in the cup walls assist in flow and ensure that the PP reaches the 0.7-mm-thick sealing rim quickly enough to completely fill out the cup.

Müller worked closely with the engineering department of the Knauer Group on the SKET project and, notably, developed and implemented the pilot cell equipped with a Multiflex IML robot, which it is running at Fakuma. The system was developed specifically for the pilot phase, so that all injection molded IML products could be tested on the same system. The system's flexibility and speed is such, however, that it can be used for small batch production.

Bringing industrial partners into the SKET process and sharing vital information played a substantial role in ensuring the success of the project, says Federer. "We always encourage customers to do a pilot phase upfront to ensure that the product they have in mind is, in fact, moldable. Industrial designers can be a bit fanciful," he sighs. An upfront investment in a pilot phase also makes financial sense, when you consider that "80% of the production costs are determined during the design phase," he adds.

For the SKET cup, for example, suggestions on part design were shared along with preliminary drawings and a 3D animation of the concept. Subsequently, at the 3D-CAD modeling stage, all of the parties involved had comprehensive insight into the project. Müller was able to perform moldflow analysis and conduct extensive simulations to ensure a successful outcome.

The IML robot shown at Fakuma features end-of-arm tooling that rotates 180 degrees and inserts labels in the moving or fixed halves of the mold. The molded parts are simultaneously removed and verified via a vision system before being stacked. The robot can be designed in single and two-cavity configurations, making it suitable for use during testing as well as small batch production.

That's the collaborative part. The tooling, robotics, and vision system were developed in-house by Müller, which makes it a point of pride not to outsource this work. "Everything is produced under the Müller roof," stresses Federer.