Home>Automation
Recent
Plastics Processing
Will 2021 Be the Breakout Year for Additive Manufacturing?
Jan 15, 2021
A Bold Move by Mold Maker IGS, and Other News from the Plastics Supply Chain
Jan 14, 2021
What’s Changed — and What Hasn’t — in Extrusion Technology
Jan 14, 2021
Breaking News in Flexible Packaging
Jan 14, 2021
The Incredible Ooho Water ‘Bottle’ Is Edible
Jan 14, 2021
Valvoline Revs Up Convenience with FlexFill Pouches
Jan 14, 2021
Talent Talk: Is Job Hopping Good or Bad?
Jan 14, 2021
Poll Asks Manufacturers What Technologies They Need to Advance Reshoring
Jan 14, 2021
Supply Chain
brought to you by 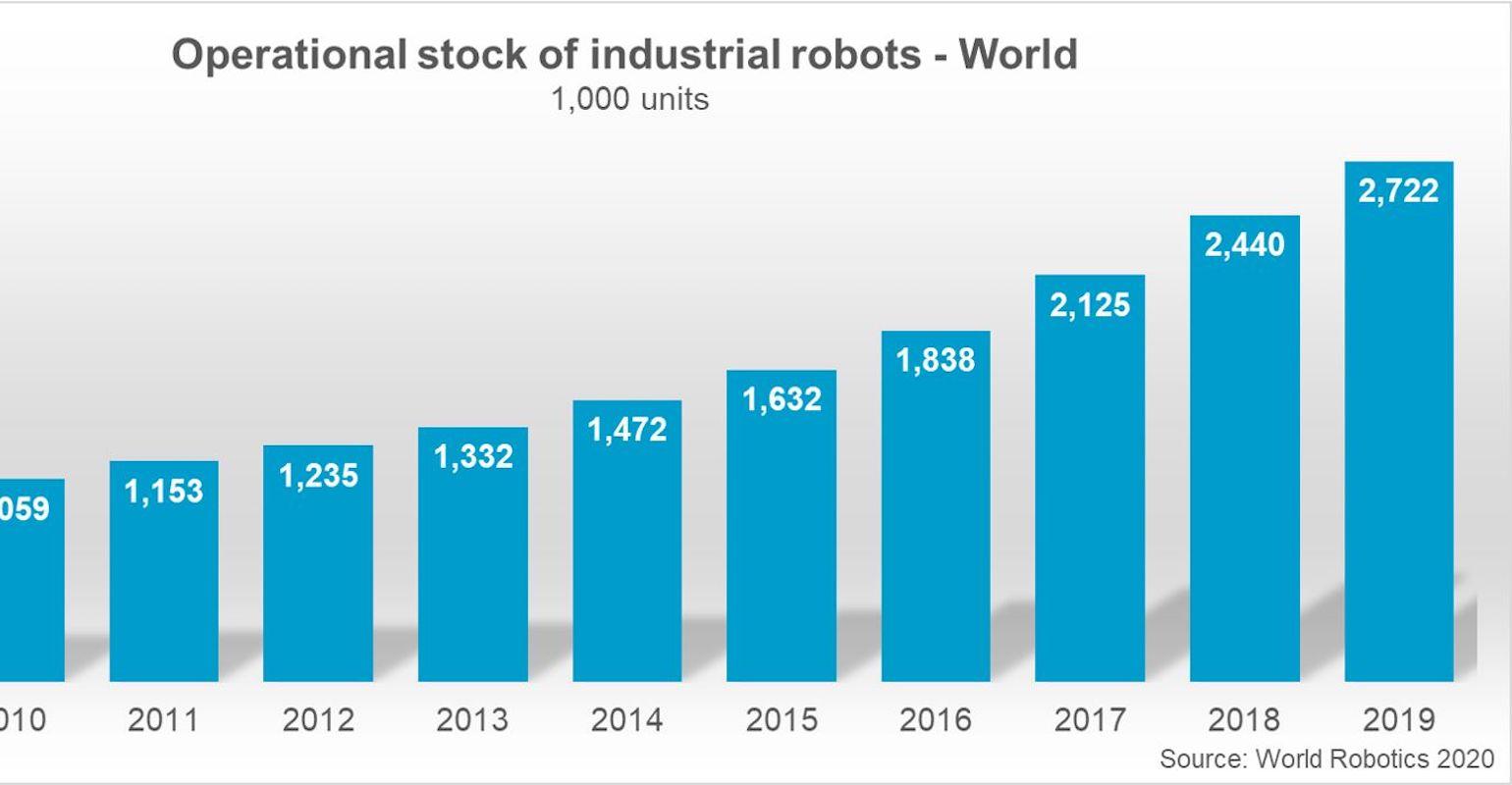 Plastics and chemical products installed base grows to 182,000 robots.

The World Robotics 2020 Industrial Robots report identifies a record 2.722 million industrial robots operating in factories around the world — an increase of 12% year-on-year. Sales of new robots remained at a high level, with 373,000 units shipped globally in 2019. This is 12% less compared to 2018, but still the third highest sales volume ever recorded.

“The stock of industrial robots operating in factories around the world today marks the highest level in history,” says Milton Guerry, President of the International Federation of Robotics. “Driven by the success story of smart production and automation, this is a worldwide increase of about 85% within five years (2014–2019). The recent slowdown in sales by 12% reflects the difficult times the two main customer industries, automotive and electrical/electronics, have experienced.”

“In addition to that, the consequences from the coronavirus pandemic for the global economy cannot be fully assessed yet,” adds Guerry. “The remaining months of 2020 will be shaped by adaption to the new normal. Robot suppliers adjust to the demand for new applications and developing solutions. A major stimulus from large-scale orders is unlikely this year. China might be an exception, because the coronavirus was first identified in the Chinese city of Wuhan in December 2019 and the country already started its recovery in the second quarter. Other economies report to be at the turning point right now. But it will take a few months until this translates into automation projects and robot demand. 2021 will see recovery, but it may take until 2022 or 2023 to reach the pre-crisis level.”

The International Federation of Robotics report predicts that social distancing requirements will boost demand for robots in the electronics sector. It also forecasts strong demand in new applications like healthcare for the production of personal protective equipment. Robots are seen as a key tool in improving the resilience of supply chains.

Asia remains the strongest market for industrial robots: Operational stock for the region´s largest adopter China rose by 21% and reached about 783,000 units in 2019. Japan ranks second with about 355,000 units, plus 12%. A runner-up is India, with a new record of about 26,300 units, plus 15%. Within five years, India has doubled the number of industrial robots operating in the country´s factories.

The share of newly installed robots in Asia was about two-thirds of global supply. Sales of almost 140,500 new robots in China is below the record years of 2018 and 2017 but still more than double the numbers sold five years ago (2014: 57,000 units). Installations of top Asian markets slowed down — in China (minus 9%) and Japan (minus 10%).

New installations in the United States slowed down by 17% in 2019 compared to the record year of 2018. With 33,300 shipped units, sales remain on a very high level representing the second strongest result of all time. Most of the robots in the US are imported from Japan and Europe. Although, there are not many North American robot manufacturers, there are numerous important robot system integrators.

The adoption of human-robot collaboration is on the rise. Cobot installations grew by 11%. This dynamic sales performance was in contrast to the overall trend with traditional industrial robots in 2019. As more and more suppliers offer collaborative robots and the range of applications becomes bigger, the market share reached 4.8% of the total of 373,000 industrial robots installed in 2019. Although this market is growing rapidly, it is still in its infancy.