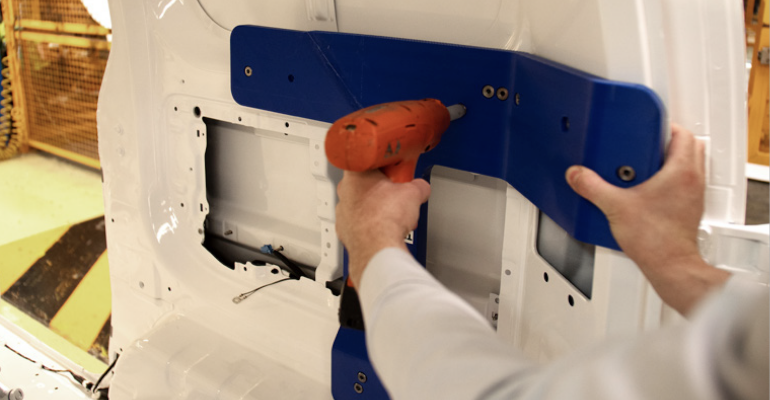 The Japanese automaker is ahead of the curve with dynamic implementation of 3D-printed tools, jigs, and fixtures.

Automotive giant Nissan is relying on a small farm of BCN3D printers in its Barcelona factory to fabricate 700 tools, jigs, and fixtures to date for its car assembly lines. Trim & Chassis Manufacturing Kaizen Engineer Enric Ridao and Manager of Maintenance & Engineering Facilities Carlos Rellán detailed the considerable savings that have been achieved at the Nissan Motor Ibérica Zona Franca plant — reducing lead times from one week to one day and reducing costs by a factor of up to 20.

“Every year we’re printing a total amount of approximately 100 jigs and tools with a specific use in our processes,” noted Rellán. Before 3D printing changed the game, Nissan outsourced all its prototypes and specific jigs for minor change trials to mechanical suppliers using traditional manufacturing methods. This meant that two vital aspects of running a production line were being lost — time and money. Moreover, in outsourcing, Nissan experienced issues of unreliability, and a strict schedule meant that flexibility was limited.

The entire process from designing to refining to printing would take a week with an external supplier. In-house 3D printing reduced the lead time to just one day, and costs were around 20 times lower compared with CNC machining.

“When we started in 2014, for the first simple tool we wanted to print we were [quoted] costs of around €400 ($475) for machining,” said Ridao. “Instead, we did it here on our factory premises. With three tools we had already amortized the machine,” added Ridao.

After the team demonstrated the value of the BCN3D machines, Nissan followed up with a Sigmax printer and later a small farm. The 3D-printing design process proved to be easier — the Independent Dual Extrusion System (IDEX) allowed the team to work twice as fast, doubling productivity, and the printers remained reliable over long print jobs.

One example of a fixture is a windshield centering gauge, which maintains the correct distance between the A-pillar of the car and the windshield. When fixing the gauge to the car parts, securing one side, in turn, secures the other, ensuring accuracy and speeding up the process. This part measures 100 x 120 x 80 mm and was printed from thermoplastic polyurethane in 14 hours. Part cost was €8 ($8.50).

A 3D-printed jig made up of five connected parts and measuring 1000 x 400 x 15 mm functions as an indicator for the drill location to maintain consistency during vehicle assembly. Each part of this positioning tool took an average of 15 hours to print using ABS at a cost of €21.50 ($25). The tool also incorporates some bushings, which means that the part itself lasts longer and damage to the plastic is prevented.

Another jig developed by Nissan serves two purposes — positioning and curing the car model name on the boot to allow the operator to position the sticker correctly every time. The print geometry makes it easy for the operator to place the name on the car, and two gauges that fit between the back panels and trunk door ensure that the nameplate is consistently positioned. This is accomplished using a neodymium magnet inside the 300 × 80 x 3 mm jig that keeps it in place firmly against the sheet metal of the car. Thanks to a UV LED strip on the bottom, the special adhesive is cured, welding the letters to the body of the car. The part is created from ABS and takes 12 hours to print at cost of just €3.45 ($4.10).

Although Nissan is currently using plastic materials, it has recently begun trialing metals, as well.