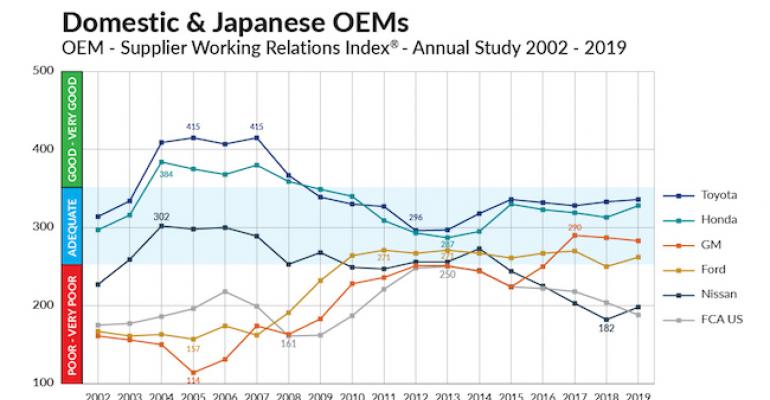 Toyota, Honda, Ford and Nissan all showed a slight uptick in the WRI. GM dropped slightly and FCA fell to last place, continuing its downward trend since 2013. However, none of the six automakers’ gains or losses were statistically significant on a year-over-year basis.

“Given the competitive pressures automakers are under and the exponential pressures they face in the future, the OEMs need to be laser-focused on improving their supplier relations in order to best leverage their supplier base,” said Dave Andrea, Principal, in Plante Moran’s Strategy and Automotive/Mobility Consulting Practice.

“OEM purchasing has to become as much a strategic priority as engineering and product development. Unless this happens, the OEMs won’t be able to deliver the electrified and autonomous vehicles and new mobility services they envision for the future,” Andrea continued. “Without a concerted effort focused on improving supplier relations and suppliers’ long-term sustainability, OEM and supplier resources are likely to be over-extended. Add to these demands the potential for economic downturns, trade pressures and other competitive pressures, and the challenge of running a profitable automotive business will be extremely difficult without the full support of an OEM’s suppliers.”

The study is watched carefully by automakers because their supplier-relations rating in the WRI is highly correlated to the benefits that the OEM receives from its suppliers, including more investment in innovation and technology, lower pricing and better support, all of which contribute to OEMs’ operating profits and competitive strength.

Two decades of industry WRI and profit-per-vehicle data back this up—working relations are a strong indicator of profitability for the OEM and supplier alike. That is because strong working relations reduce the cost of doing business, improve efficiency and productivity, and reduce time to market.

How do suppliers rank the six automakers and purchasing teams in terms of trust? Toyota and Honda are first and second, respectively; GM and Ford rank third and fourth, respectively; FCA is fifth but trending down significantly; and Nissan is last. Plante Moran’s report on the WRI noted that the degree of corporate trust is “built from many granular elements of the study, which measures everything from protection of intellectual property to the level of open and honest communication and fulfilling contractual commitments.”

Suppliers support their OEM customers essentially by price reductions on parts, and by providing valuable non-price benefits such as increased investment in new technology, greater sharing of new technology, and earlier and better supplier communications that help avoid or resolve problems more quickly.

The SBI also closely tracks the degree to which an OEM is a preferred customer: Toyota and Honda rank first and second, respectively; Ford and GM, third and fourth, respectively; FCA fifth; and Nissan significantly lower in last place.

“It’s not just purchasing that influences an automaker’s WRI ranking; product development and engineering do, too,” said Andrea. “For instance, the study asks to what extent late or excessive OEM engineering changes impact on-time development or quality and cost targets; whether the supplier is given flexibility in meeting cost and quality objectives; and whether the supplier is involved early enough in the OEM product development process and kept involved throughout the process. These are critical questions that show how important it is that all OEM functions are aligned to take cost and time out of the entire supply chain to deliver not only the OEM’s cost objective but help the supplier’s cost and financial performance, as well,” Andrea stated.

The number of late or excessive engineering changes impacts a supplier’s contribution to the OEM in three important ways: Cost, quality, and time. Toyota was best at managing engineering changes in 2018, followed by Honda. In 2019, they’ve swapped places, with Honda now in first place. GM and Ford are ranked in the middle, and FCA US and Nissan are last, the study revealed.

“Focusing on improving supplier relations has never been more important for the automakers,” said Andrea. “With all the challenges the automakers are facing, the OEMs must be very conscious of their supplier working relations going forward. Suppliers contribute 60 to 70% of the value of the vehicle, so it is clearly in the OEM’s best interest to set the goal of becoming the most preferred automaker to do business with.”