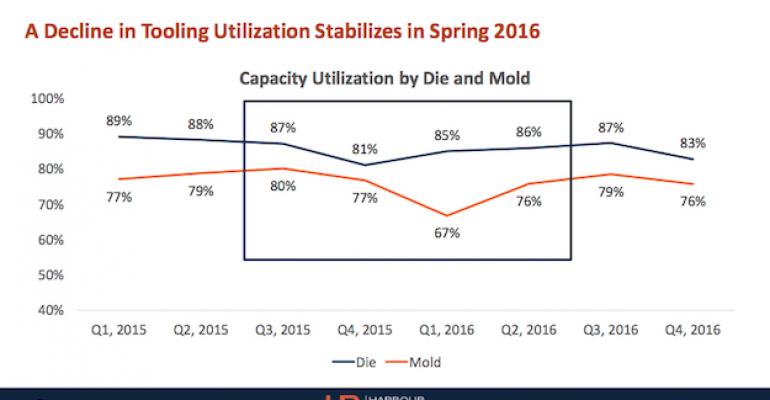 Research indicates industry is recovering from a downturn, and shops are expressing a positive outlook about their business in the coming months.

The Original Equipment Suppliers Association (OESA; Troy, MI) and Harbour Results Inc. (HRI; Southfield, MI) recently released their Automotive Tooling Barometer containing data from Q2 2016. While the industry experienced a slow start to the year, with more than $2 billion in tooling capacity not leveraged during the first quarter, it has since taken a turn in the right direction, noted the survey report.

Not only have capacity utilization rates (reported this month) stabilized for die (83%) and mold (76%) toolmakers in the fourth quarter, overall work “on hold” has decreased by six percentage points since January. HRI estimates “on hold” impact for industry in the second and third quarters to be around $1.6 billion, a decrease from more than $2 billion in January.

HRI’s research shows the industry is recovering from a downturn, and shops are expressing a positive outlook about their business in the coming months. Year-over-year, the Tooling Sentiment Index has experienced a 32% change, with sentiment now up eight points since January to 74. HRI’s analysis of the survey results revealed the cyclical nature to sentiment, as there is some level of correlation to the amount of work “on hold” reported. 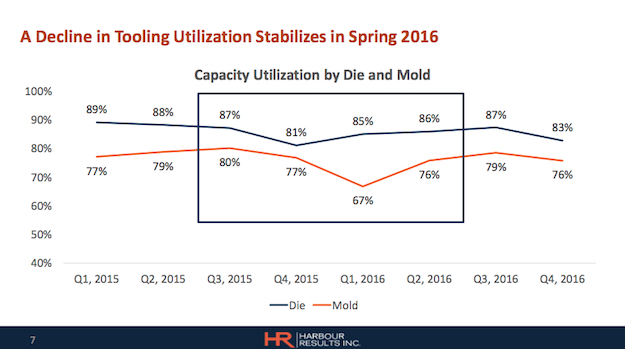 “Automotive forecast data show the industry can expect to see a significant increase in tooling during the next two years,” said Laurie Harbour, president and CEO of HRI. “Although the average price per tool is down, it is important that shops increase quoting to maintain revenue and meet demands.”

Additionally, the research assessed sales and marketing activities within the tooling industry and found that sales efficiency and quoting levels varied greatly by tool shop revenue. Larger shops demonstrated greater levels of efficiency, with shops over $20 million earning 22% more revenue per salesperson and quoting 32% more per estimator than shops under $20 million.

The Tooling Barometer collected insights from a diverse group of shops with a total of more than $1 billion in tooling revenue across nine different industries. Although 82% of responses come from automotive, HRI deems this to be a good reflection of the overall industry as the automotive industry accounts for a majority of the tooling industry’s revenue.

The OESA Automotive Tooling Barometer survey series was created by the OESA Tooling Council in partnership with Harbour Results Inc. to provide an indicator of the current state of automotive tooling and a perception of long-term prospects for the industry.