The Best and Worst in Automotive/Mobility in 2022 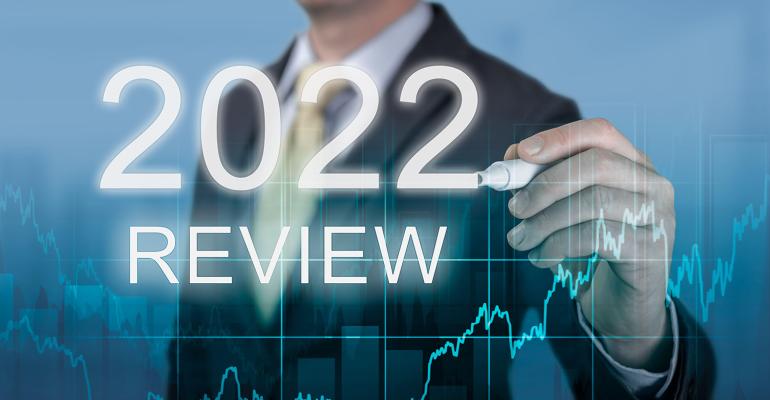 Wireless charging and vertical take-off and landing aircraft made headlines in 2022 for good reason. So did a slew of EV startups and Elon Musk, but they weren't relishing the attention.

It’s the time of year where we reflect on what went well in the automotive/mobility sector and what didn’t go quite to plan, both above and on the ground, quite literally in one case — and this is the ugly of the list — for many Chinese workers who were forced to sleep on factory floors during COVID-19 lockdowns.

Our countdown begins with what we think are the top five achievements of the year.

If you had asked last year around this time whether autonomous driving would gain traction before vertical take-off and landing (VTOL) taxis, many would have opted for autonomous driving. Now, however, it seems that the reverse may be the case, as you will see when we get to the failures of the year.

A model of the VX4 eVTOL aircraft displayed at the Solvay booth at K 2022 gave an indication of how close this mode of transport is to commercialization. The first manned test flight for the life-sized VX4 was in September of this year, and developer Vertical Aerospace has already received 1400 orders for the aircraft.

VTOL transport makes extensive use of carbon-fiber composites for structural components as well as specialty materials for batteries and e-motor parts.

Imagine if you could charge your electric vehicle wirelessly, similar to the way you use a charging pad to power up your mobile phone. Just park your car over a wireless charging pad, and your battery tops up as you shop or work, while you are underway or at home. Wireless charging pads are closer to reality than you might think. There’s also longer-term potential to charging on the fly in autonomous vehicles traveling at 20 to 30 km/hour over charging transmitters embedded in the road.

Wireless charging could also be deployed effectively at one or both ends of an electric bus route to top up the batteries for say 10 to 15 minutes while the bus is waiting at the terminal before a new trip starts, according to IDTechEx.

With use, lithium-ion batteries degrade. Particularly damaging to battery health is overnight charging or deep-cycle discharging. High [fast] charge rates degrade batteries because of the temperature created, according to IDTechEx. Studies have also shown that topping off batteries during the day keeps from having to charge batteries from deeply depleted states, extending battery life. Frequent, yet shallow charging is better for battery life than deep, infrequent charging, and this can be more readily enabled by wireless charging. Frequent charging can also potentially reduce battery size and mass.

Stellantis sees software as the future . . .

. . . and acts on it. Early this year, automaker Stellantis announced it was collaborating with Amazon to deliver software for its STLA SmartCockpit, which will run in millions of Stellantis vehicles globally starting in 2024. While software has been embedded deeply in individual auto components for decades, programming has generally been proprietary. Stellantis has essentially realized, however, that the car of the future will require a common platform to outfit the vehicle with a centralized computer and operating system to which standardized plug-ins can be added to control various components and deliver a multitude of functionalities, effects, and luxuries.

Stellantis also recently launched a “Data and Software Academy” with the aim of retraining over 1,000 of the firm’s existing auto engineers annually, as well as attracting talent from across the globe. The target is to have 4,500 software-savvy engineers in house by 2024. (Pictured above is Yves Bonnefont, Chief Software Engineer at Stellantis.)

Sister publication Battery Technology noted the investment rush for EV battery module plants propelled by the Inflation Reduction Act, which mandates that in 2023 at least 40% of the monetary value of critical battery minerals need to be from either the United States or one of its free-trade partners in order to qualify for US tax credits. That percentage will rise to 80% in 2027. (Pictured below is the official groundbreaking of a $5.54 billion manufacturing plant by Hyundai Motor Group in Georgia.)

This is not only a boon for employment at massive plants planned for Georgia, North Carolina, South Carolina, Oklahoma, Ohio, Tennessee, California, Texas, and potentially elsewhere, but it should also attract considerable investment in battery components, many of them incorporating plastics. The United States is also attracting new investment in charging infrastructure.

Best cars of the year

Another sister publication, Design News recently ran an article on the 10 best cars of the year, according to Consumer Reports’ Annual Auto Survey, and coming in first was the Toyota Corolla Hybrid with a score of 93 out of 100.

Another model from the Toyota stable, the Lexus GX, followed closely behind with a tally of 91, while surprise package the Mini Cooper scored 89 to finish third. As a testament to its all-around reputation for reliability, three more Toyotas made the top 10, with Lincoln, Mazda, Subaru, and BMW models also making the cut.

And now, the five biggest fails of the year

Talk about burnout. No, this is not work-related or about boy racers doing donuts — we are talking about EV startups failing to deliver on their promises in terms of production volumes — something even Tesla was guilty of in its earlier days — and burning through cash faster than a Ferrari accelerating from zero to 60.

A long list of newcomers from Arcimoto (pictured), Lordstown Motors, and Nikola to Rivian Automotive are shedding value like there’s no tomorrow in the current stock market downturn. Most of them are unlikely to scale production anytime soon and some are struggling with product recalls and safety concerns. Perhaps it is too early to write off incumbents such as Ford and GM in the race to electrified drive-train domination.

Argo AI, an autonomous vehicle (AV) startup, burst onto the scene in 2017 amid all the hype about driverless cars. It was backed by a $1 billion investment from Ford and VW, but even that wasn’t enough to keep it afloat, and the company shut down in late 2022. Ford stated in its third-quarter earnings report that it made a strategic decision to shift its resources to developing advanced driver assistance systems, and not autonomous vehicle technology that can be applied to robotaxis.

While autonomous vehicles might have less trouble navigating the wide boulevards of Austin, TX, where Argo AI was headquartered, it seems that real-world driving situations are much more challenging and true driverless vehicles might be farther off than initially anticipated. Paraphrasing Darrell Etherington of TechCrunch, “Self-driving isn’t going to be a thing with any kind of omnipresent scale in our lifetimes.”

It's even proving difficult for tech giant Apple, which is tempering its ambitions so that autonomous capability will only be available when the car is driving on highways. The AV after all will feature a steering wheel and pedals.

Ever been locked out of your car? Tesla owners could potentially have found themselves in this precarious situation if Apple had reacted adversely to criticism from new Twitter owner and Tesla boss Elon Musk for pulling its advertising from the social media platform. He may have forgotten that many Tesla owners use an iPhone app as a vehicle entry system. A ban from the App Store for the Tesla app would have left many out in the cold.

Musk, who must be regretting his foolhardy acquisition of Twitter in the name of free speech by now, should know that advertisers are free to take their custom to a platform of their choosing. Any bets on an Apple Car eventually emerging? The latest report from Bloomberg indicates a delayed release of the secretive Titan AV, with a lot less autonomy than initially planned, around 2026.

GM autoworkers forced to sleep in the factory

China’s failed “dynamic” COVID policy often saw entire cities lock their citizens within their apartment compounds for weeks on end. At the very hint of an impending lockdown, many companies would either corral their staff in the office or call them in to tide it over at night and work in the daytime for extended periods. In the banking sector, some traders were offered between 500 and 2,000 yuan ($78 to $314) per night to camp out at work, according to website Think Remote. Some companies placed folding beds on their employee’s desks. Others provided sleeping bags, food, and toiletries.

We think assembly line workers at a General Motors factory in Shanghai (pictured) may not have been so lucky going by an April 2022 Business Insider report, that stated GM asked workers to sleep on the factory floor. This was reportedly part of “global contingency plans executed by GM with its suppliers to mitigate the uncertainty related to COVID-19.”

Worst cars of the year

Our sister publication Design News also ran a recent article on the 10 worst cars of the year, according to Consumer Reports’ Annual Auto Surveys, with a hybrid-electric version of Ford's top-selling F-150 pickup (pictured) “winning” the ignominious award. The vehicle is “failing to uphold the brand's “Built Ford Tough" slogan,” registering as the least reliable vehicle in this year's Consumer Reports owner survey. Drivers said they had trouble with the pickup’s electrical system, power equipment, and drive system and that it made noises and sprang leaks.

Second worst was the Hyundai Kona Electric, a battery-electric vehical that is failing to deliver on the promise of improved reliability. Problems cited include the battery pack, charging, electric drive system, climate control, and in-car electronics.

Coming in third worst was the Lincoln Aviator, which shares its platform with the fifth-worst Explorer, so it is no surprise to find both on the list. Drivers said they had problems with the climate control, steering, suspension, electronics, paint, and trim. Unlike the Explorer, the Aviator owners didn't have transmission problems, but their infotainment systems have been so troublesome that some reported having a needed complete replacement of system hardware. For the record, one Nissan model, two Chevrolets, two Jeep models, and one Mercedes Benz model also made the worst 10 list.