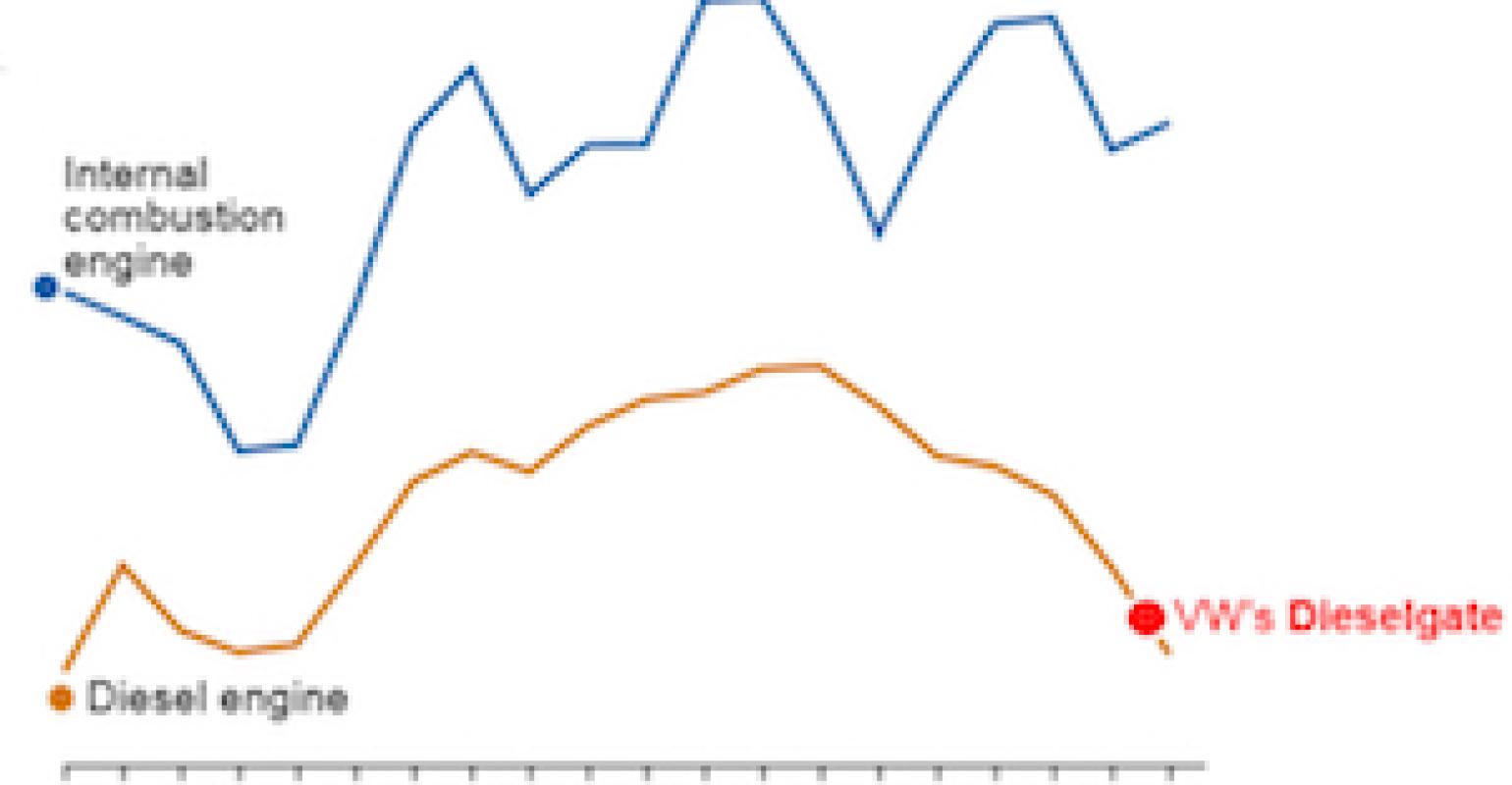 A suspicious decline in diesel innovation coincides with when diesel-powered cars incorporating the cheating software hit the market, according to a study conducted by Lux Research (Boston).

Lux Research, an independent research and advisory firm based in Boston, published a blog post recently about the fallout from Volkswagen’s diesel emissions cheating. “The common narrative is that this was a surprising, unforeseen event, and in many ways, it was,” writes the company. “However, newly developed, specialized, big data analysis allows us to investigate diesel innovation—and uncover some interesting trends. By applying our Lux Tech Signal software tool to the topic of diesel engines, we see a suspicious decline in diesel innovation.” (See figure 1.)

Lux explains that its Tech Signal works by algorithmically doing high-throughput parallel analysis of various early-stage datasets about innovation, resulting in a revealing picture about any technology’s progress—in this case, the lack thereof, said Lux. “Intriguingly, this decline in diesel engine innovation interest matches up very well with the timing of when diesel-powered cars incorporating the cheating software hit the market. Our analysis shows the decline happening from 2010 to 2014; meanwhile, the cheating vehicles hit the market around the same timeframe.” (See figure 2.)

That presents an “interesting contrast,” Lux noted. “During a time of ever-tightening emissions regulations, and of more and more automakers rolling out supposedly advanced diesel engines, developers appeared to have been pulling back on their interests in further innovation,” said Lux. “While it would be over-reaching to state that this is a causal and direct relationship, it does hint at the importance of tracking whether innovation is or is not proceeding apace.”

To determine whether this trend might simply be caused by slowing innovation in conventional engines en masse, Lux looked at whether innovation within the internal combustion engine (ICE) as a whole is fading. It is not, Lux concluded. Combustion engines, in general, continue to receive steady interest in innovation, while diesel engines do not. (See figure 3.) Since diesel engines are also ICEs, the disparity between the two curves would be even higher if we were to segment out non-diesel ICEs versus diesel ICEs.)

Lux Tech Signal was also used to look at how other areas of automotive drivetrain innovation performed, and found that while diesel engines’ innovation interest was spiraling downward, electric vehicles were seeing a genuine uptick. “Ironically,” noted Lux, “in its post-dieselgate scramble to pivot, VW has jumped between the two curves, shifting priorities from diesel engines to a mad dash to catch up in electric vehicles, instead." (See figure 4.) Fuel cell vehicles, on the other hand, performed very poorly in the data-driven analysis, foreshadowing their abysmally low sales on the market today.

Meanwhile, said Lux, “VW’s mainstream global competitors—Toyota, GM and Ford—doubled their average diesel innovation activity during that same timeframe,” as shown in figure 5. It rose by about 1.2% to 2.4% on average, again as a percent of overall global diesel innovation. (A note on methodology: The reason Lux chose to combine VW and its supplier Bosch in this study, is because the “dieselgate scandal obscured each party’s role. It appears both were involved, but the exact nature of their collaboration is opaque, so they are lumped together. This should have the effect of boosting the resulting combined innovation activity; the fact that it declined is telling, says Lux.)

It is striking to see in figure 5 that both VW’s and Bosch’s diesel innovation declined, according to Lux’s data set, beginning about “eight years before the automaker sold its first cheating diesel vehicles. The decline then continued for another six years before the cheating was discovered. Although only the hands-on investigative work from vehicle emissions researchers could have unearthed dieselgate, the data around the industry’s lack of diesel engine innovation interest were there all along, buried in early-stage data sets about technology.

Lux concludes that with advances in data science methodologies, “such innovation trends can now be analyzed rapidly and consistently, for any technology-related topics. As this case study shows, there is no escaping the need for corporations to innovate: Cutting corners shows up in the data, and then shows up in the marketplace.”