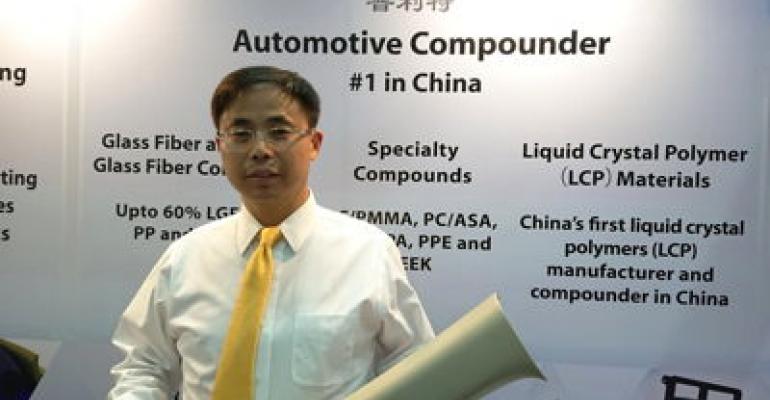 Shanghai PRET Composites has emerged as one of the world’s leading suppliers of automotive grade PP compounds. Over the course of 12 years, the company has increased revenue from $20 million in 2003 to $700 million in 2015, in the process boosting global compounding capacity for PP and other resins to 500,000 tonnes/yr.

A 50,000-tonnes/year compounding facility to produce ABS, PP, and PP long glass fiber compounds was subsequently set up at the North American site at the behest of BMW and the company renamed Wellman Advanced Materials. Customers in North America reflect its customer base in China and in addition to BMW include GM, Ford, BMW, FCA, and VW. Shanghai PRET also recently established an office in Frankfurt, Germany as a potential prelude to setting up compounding operations in Europe.

In China, the company has three compounding bases, in Shanghai, Jiaxing (Zhejiang Province) and Chongqing. Shanghai PRET is also a polymer manufacturer in its own right, producing liquid crystal polymer at a 2,000-tonnes/yr plant since 2012.

According to Fred Zhou, Director and Deputy General Manager of Shanghai PRET Composites, the US market is easier to compete in compared with the home market of China based on the company’s tenets of quality, service and technology. Quality is of primary importance in the U.S. market whereas in China, Shanghai PRET must compete against local players employing locally-sourced base resins and in some cases unacceptable levels of recycled material. “Recycled material ‘sneaks in’ to formulations in China and the resulting cost equation pushes others to use recycled PP as well,” says Zhou, whose company sticks to reputed suppliers of PP neat resin. “Our number one supplier is ExxonMobil Chemical and our number two is Sinopec.”

Shanghai PRET also invests heavily in testing equipment for quality control purposes. “We have invested $4 million in our Shanghai lab, which uses the same testing equipment as VW uses in its China facilities,” says Zhou.