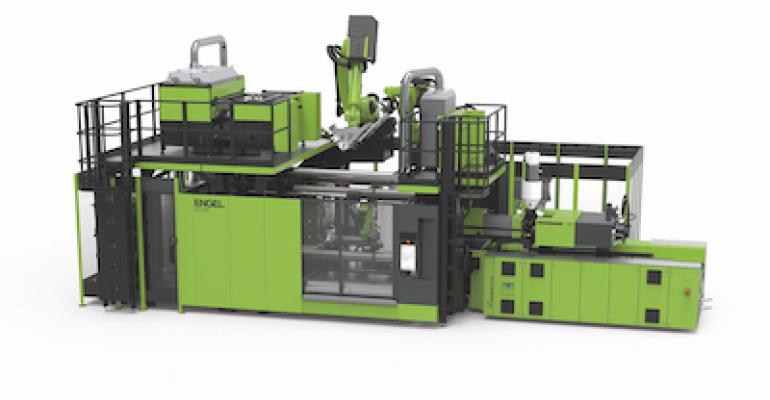 From 16 to 23 October at the K 2019 trade fair, Engel will be taking the next major development step in the series production of thermoplastic-based lightweight composites. At the show in Düsseldorf, Germany, the injection molding machine manufacturer and systems solution provider will be using the organomelt process to produce demo parts that reflect the latest innovations for car door modules. The production cell Engel will be exhibiting is the first in the world to use infrared radiation to heat up and form three organic sheets of differing thicknesses, as well as shaping a high-quality visible surface in the same injection molding process stage. The system will be equipped with three Engel easix articulated robots all operating at the same time.

“Thermoplastic composites are growing in importance when it comes to lightweighting in the automotive industry,” reports Dr. Norbert Müller, head of Engel’s Center for Lightweight Composite Technologies. There are two main reasons for this. Firstly, the consistent thermoplastic approach makes it possible to efficiently integrate the forming and functionalization of fiber-reinforced prepregs, which reduces unit costs. Secondly, the exclusive use of thermoplastic polymers makes it easier to develop recycling strategies. “Returning composite components to the material loop at the end of their service life is one of the priorities for ongoing development in the electric vehicle sector,” Müller notes. “Thermoplastic solutions are now becoming an increasingly frequent method, even within aircraft construction.”

Engel’s answer to the need for sustainable transport is organomelt. In the organomelt process, fiber-reinforced prepregs with a thermoplastic matrix such as organic sheets and tapes are heated, inserted into the mold, formed there and directly overmolded with thermoplastic. The process has already been used in high-volume manufacturing, with Engel organomelt used for fully automated production of items such as front end carriers.

As this process undergoes further development, Engel is working together with its customers and partners on the production aspects of designing composite components with a targeted load distribution. “In the future, several different prepregs will be combined for each component to tailor the lightweight construction characteristics to the relevant component’s shape as well as the different stresses on individual areas inside the component,” Müller explains. “The production cell at the K show will clearly demonstrate that great potential.”

The molding process to be exhibited at K was developed in partnership with automotive part supplier Brose. This is currently the only system in the world that can simultaneously process three differently shaped organic sheets between 0.6 mm and 2.5 mm in thickness in a fully automated process involving integrated IR ovens. The different stresses on the individual component areas can be dealt with thanks to the targeted selection of organic sheets on the basis of load distribution – an outcome that Brose has helped to ensure through a variety of simulation processes. The demo part to be produced at the K show, for instance, is more rigid in its window frame area than on the inside of the door.

One of the challenges with processing organic sheets is the heating of the prepregs. The time they take to heat and cool depends on their thickness. Heating the material quickly without damaging it is important, as is a fast and straightforward transition to the mold for the heated prepreg. The organomelt production cell to be featured at K is based on a duo 3660/800 injection molding machine and includes two integrated IR ovens for this reason. There is a vertical IR oven positioned directly above the clamping unit to heat up the organic sheet, which is only 0.6 mm thick. This way, the thin organic sheet reaches the mold in practically no time, ensuring that it has not yet cooled down and become impossible to form. A standard, horizontal IR oven on a pedestal above the moving platen will be used for the two thicker organic sheets (1 mm and 2.5 mm). This arrangement shortens the distance between the oven and the mold, as well as saving space since the oven does not need separate floor space. Both of the IR ovens were developed and manufactured in-house by Engel. These and the three easix robots are fully integrated with the IMM’s CC300 control unit and can be centrally controlled via the machine’s display.

All three organic sheets are heated up at the same time. Two of the three easix robots are then available to handle the organic sheets. These are located next to one another above the clamping unit. While the first robot is responsible for handling the two thicker organic sheets, the second robot takes care of the thinnest sheet. During the entire heating process, it holds the organic sheet in front of the vertical radiation field so that it can be placed into the mold after the set heating-up period is over. The third robot is located next to the clamping unit. Its job is to remove the molded part, while at the same time moving one of the three organic sheets into the mold for the injection molding process.

The organic sheets, which were obtained from Chinese compounder Kingfa, are made of glass fibers and use polypropylene as their matrix material. When the mold – built by Georg Kaufmann Formenbau – closes, the organic sheets are formed. Immediately afterward, they are overmolded with glass fiber-reinforced polypropylene within the same mold. Reinforcing ribs are shaped on the back of the component, while a leather-look grain is shaped on the visible side. “When directly overmolding the organic sheets, we can achieve an outstanding grained leather look, which was previously seen as impossible when it came to organic sheets,” Müller stresses. “In that regard, we’re laying the foundation for producing large structural thermoplastic door structures using the organomelt process in the future.”

The production solutions developed by Engel at its Center for Lightweight Composite Technologies are distinctive for their high efficiency and cost-effectiveness – both essential requirements for high-volume production applications. “Engel’s considerable expertise in automation plays a major role,” says Walter Aumayr, vice president of Engel’s Automation and Composite Systems division. With three Engel easix articulated robots all operating at the same time, the organomelt cell at Engel’s stand will provide a truly state-of-the-art example of integrated composite processing. This high degree of integration makes this the most complex production cell that Engel will have ever showcased at a trade show, as well as simply being one of the most sophisticated systems on display at K 2019.

“The more process stages we incorporate and the more individual systems a production cell includes, the more complicated the process as a whole becomes,” Aumayr acknowledges. “So as a systems solutions provider, Engel has ensured that there is a consistent operating logic and joint data management throughout the cell, making it far easier to use articulated robots. The easix robots can be operated relatively simply by the workers involved in injection molding on the shop floor.”

A special aspect of Engel systems is that the IR ovens are also fully integrated into the CC300 control unit, ensuring that there is a uniform operating logic for the entire process. In addition, since the molding machine, robots and peripheral units all access the same database in the Engel systems solution, the risk of error decreases and efficiency increases. Without any need for additional hardware, the easix articulated robots can synchronize their movements with the movements in the mold, such as those of core-pulls or ejectors. “As a result, we can reduce both cycle times and capital outlay, especially when it comes to large-scale systems,” Aumayr says.