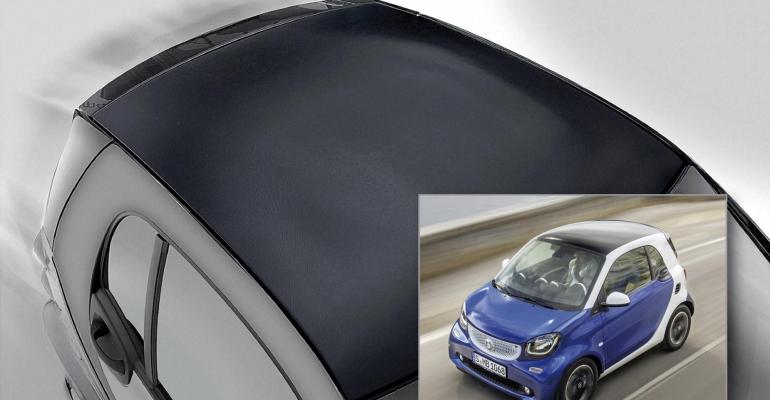 A polyurethane foam system from BASF has reportedly enabled for the first time mass-production of an exterior car part featuring a honeycomb sandwich structure with a class-A film.

A polyurethane foam system from BASF has reportedly enabled for the first time mass-production of an exterior car part featuring a honeycomb sandwich structure with a class-A film.

The roof module in the standard model of the new smart fortwo consists of a paper honeycomb and two surrounding glass fiber mats. These are sprayed in an impregnation process with the low-density, thermally activable Elastoflex E 3532 and pressed together with a solid-colored class-A film. A single operation thus produces a roof module which is around 30 percent lighter than the standard roof on the previous model - but retains the same strength and flexural rigidity. The lightweight roof was developed by Fehrer Composite Components (GroÃŸlangheim, Germany).

The honeycomb technology has previously been used in the car interior, for example for loading floors, roof linings, and rear shelves. For use in exterior components, BASF has adjusted the viscosity and reactivity of Elastoflex E (a semi-rigid polyurethane system), which was developed for the honeycomb technology, so that it can be optimally processed in each manufacturing step and shows good adhesion properties: It reportedly guarantees uniform, thin wetting of the glass fiber mats and does not drip. Once the semi-finished product has been impregnated, it is pressed into shape in a heated mold together with the class-A film. This causes the PU system to foam up slightly at the edge of the sandwich and creates a solid material composite between film, reinforcing mats and paper honeycomb core.

The reactivity of Elastoflex E has been adjusted so that long spray times of up to 120 seconds are possible for large-scale parts, along with short demolding times of up to 60 seconds. Moreover, decorative materials and films can be directly bonded or back- foamed in the mold as Elastoflex E shows good adhesion to films. The roof module of the smart fortwo is coated with a film having a class-A surface on the outside. A textile covering is attached on the inside.

"In contrast to conventional composite parts, in this roof module the individual layers are not glued together in a multi-stage process, but are instead produced in a single manufacturing step. This is much more efficient - also thanks to the clean process with the polyurethane foam and the customized technical support from BASF," says Gao Kwintmeyer of Global Purchasing at Fehrer.