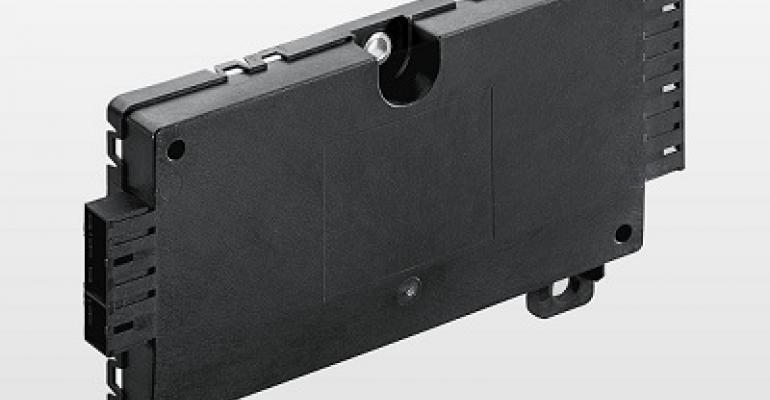 The blend of polybutylene terephthalate (PBT) and acrylic ester-styrene-acrylonitrile (ASA) contains 30 percent by weight glass fibers and a halogen-based flame retardance package. “The particular advantages of the material are its extremely low warpage and shrinkage, combined with its high flame retardance. We see great potential for application in precision components for vehicle battery systems,” says Marc Marbach, head of Sales Segments E&E in the Lanxess High Performance Materials (HPM) business unit. It took just two-and-a-half years to go from the initial idea to extensive testing and finally to use in full-scale production.

Hella fabricates the BMU and CMUs for a German manufacturer of battery systems for motor vehicles. The very flat devices currently are used in the lithium-ion battery system of a German compact car.

The housings of the BMU and CMUs have large, flat surfaces as well as complex geometries along the edges and on the inside. Thanks to their innovative design, they can be injection molded cost-effectively as single components. The contact pins for the connectors must not bend when the housings are mounted on the printed circuit boards. The tolerances for the spacing between the connector mounts and the cut-outs for the pins are therefore extremely close. “This is precisely where the outstanding dimensional stability of our blend Pocan AF4130 pays off,” explains Marbach.

As required for this application, the material achieves the best flame retardance classification of V-0 (0.75 mm) in UL 94 fire testing by the U.S. testing organization Underwriters Laboratories Inc. It further is listed on the UL Yellow Card with a good classification of UL 94 5VA (1.5 mm).

The material is destined for the injection molding of flame-retardant housing components. It additionally has been given a UL f1 listing for use in outdoor applications involving exposure to UV light and water. “Our compound thus has a good chance of also being used for electrical components such as photovoltaic plugs and sockets,” adds Marbach.

The surfaces of parts molded of this thermoplastic are very low-emission, as demonstrated by thermal desorption analyses conducted by Lanxess in accordance with the VDA 278 standard (German Association of the Automotive Industry). “It is therefore also suitable for many motor vehicle applications requiring very low volatile and condensable emissions, such as components for the automotive interior,” says Marbach.

The blend is highly resistant to typical media used in motor vehicles, such as fuels, oils, cleansers and car care products, as proven in extensive media storage tests conducted by Lanxess for Hella in accordance with the supply specification LV 124, used by many automotive manufacturers. It also displays good resistance to an electrolyte widely used in lithium-ion batteries. The corresponding test was additionally conducted under load in compliance with DIN EN 22088-3. “No cracks were evident in the samples even after 1,000 hours of exposure,” explains Marbach.

Lanxess provided Hella with extensive support in developing the housing components. These services are part of its HiAnt customer service package. For example, HPM delivered suggestions for optimal component design, provided all the characteristic material data required for the computer-aided design of the housing parts to meet expected loads and for the mold flow analyses, and supported the initial injection molding trials. The specialty chemicals company further determined the blend’s halogenated content for Hella by means of ion chromatography and conducted odor testing to VDA 270.