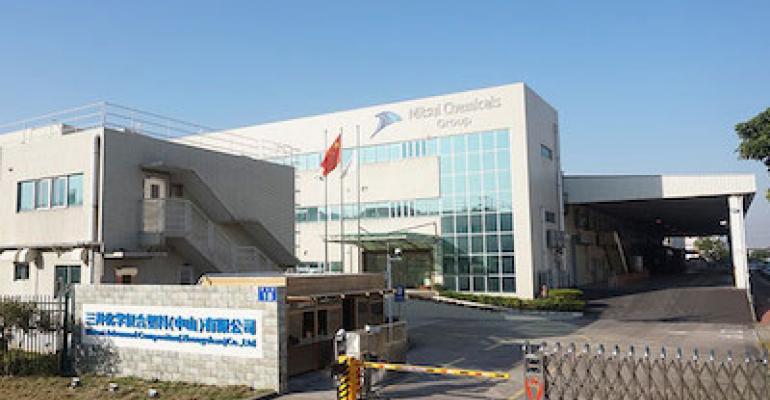 Following on from a new plant planned for operation in Ohio by October 2019, the Japanese company intends to start production in China in September 2020.

This will become Mitsui Chemicals’ third manufacturing base for LGFPP, joining existing bases in Japan and the U.S. By establishing this new facility, Mitsui Chemicals’ overall production capacity for LGFPP will increase to 10,500 tonnes per year.

Mitsui Advanced Composites (Zhongshan) will have a production capacity of 3,500 tonnes/year when is starts operation in September 2020 according to the construction schedule that will see the plant completed in February 2020 and commissioned.

Last September, Mitsui Chemicals announced that it would also establish 3,500-tonnes/year of LGFPP capacity at affiliated Advanced Composites, Inc.’s Ohio Plant. This facility is slated to come on stream in October 2019.

Global demand for LGFPP is growing at an average annual rate of 5.2% according to Townsend Solutions (Houston, TX). This is mainly down to increased use in the auto sector for lightweighting. Mitsui Chemicals is emerging as the second-ranked Japanese supplier of LGFPP compounds behind Mitsubishi Chemical-affiliated Japan Polypropylene.

Developed by affiliate Prime Polymer Co., Ltd., Mitsui Chemicals’ LGFPP reportedly offers an attractive appearance, with long glass fibers providing a good balance between hardness and impact resistance. The material is already being adopted in areas such as the unpainted insides of rear car doors.

The recent strengthening of environmental regulations and a shift toward electric vehicles have led to increasing needs for automotive lightweighting. As a result, demand is on the rise for fiber-reinforced resins and is expected to grow further for such materials able to substitute for metal such as car doors and other such parts.