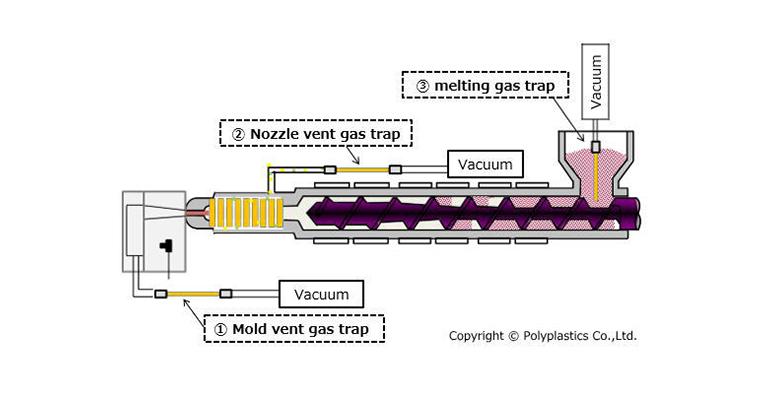 The proprietary technology developed by Polyplastics captures and evaluates the gases and identifies the mechanism by which pyrolysis gas forms during the injection molding process.

During the injection molding process, high temperatures and speeds along with the deterioration of plastic additives can release high volumes of decomposition gases. Mold deposits, gas burns, and short shots caused by pyrolysis gas can lead to quality problems. These may include undesirable effects on the dimensions and appearance of molded parts, resulting in high defect rates. Maintaining efficient production operations is important as manufacturers work to meet challenging applications such as automotive electrification and automation, said Polyplastics in its announcement.

The company’s proprietary technology captures and evaluates the gases formed during molding and identifies the mechanism by which pyrolysis gas forms during injection molding. It traps gases according to mold-based methods, and uses gas chromatography mass spectrometers (GC/MS) to qualitatively and quantitatively analyze their composition, identify the gases that are formed, and make fundamental improvements to the sources of their formation.

The system’s configuration is divided into the three stages of plasticization, metering, and injection, and each unit is fitted with traps to segregate the gases that form within each part of the process.

GIMIM makes it possible to measure high-molecular-weight substances that can cause mold deposits. Since this method directly analyzes gases that are formed inside the mold during filling, it yields results that are closest to real-world conditions, according to Polyplastics. In further research, Polyplastics plans to examine other problems caused by pyrolysis gas, such as short shots and gas burn defects as well as mold deposits.