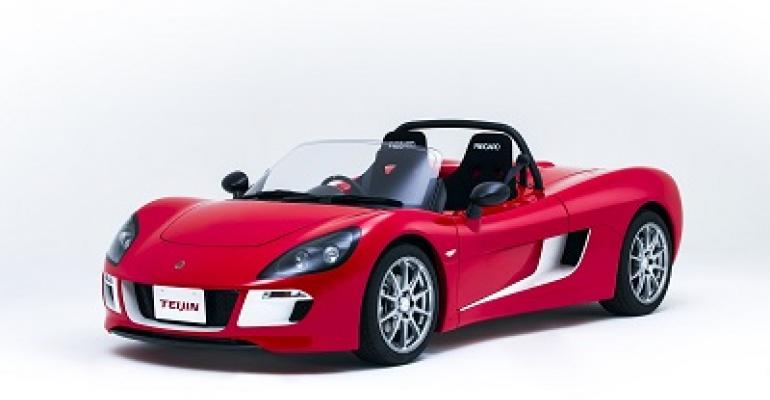 The stunning Tommykaira ZZ Electric Vehicle debuts at the Automotive Engineering Exposition 2017 Nagoya from June 28 to 30.

Japan’s Teijin Limited is exhibiting the world’s-first polycarbonate (PC) resin pillar-less automotive front window, installed in the Tommykaira ZZ electric vehicle (EV) produced by GLM Co., for the first time ever during the Automotive Engineering Exposition 2017 in Nagoya, Japan. GLM, an EV manufacturer launched by Kyoto University, expects to acquire street-ready certification for the Tommykaira ZZ fitted with Teijin’s PC resin window shortly, after which it will offer the window as a special option for the car from this autumn.

As previously reported by PlasticsToday, use of PC resins in automotive front windows is currently prohibited in Japan due to existing safety standards but new Japanese standards that will become effective in July will pave the way for the resin’s use in the Tommykaira ZZ due to the high resistance to abrasion and weather that Teijin has realized with its hard coat technology.

Furthermore, by thickening the perimeter of its PC-resin window, Teijin has managed to eliminate the need for the A-pillar. As a result, the transparent PC resin window achieves unobstructed sight lines for safer driving and more enjoyable sightseeing. To boot, the integrated PC resin pillar-less window also is 36% lighter in weight than an equivalent conventional front window with an A-pillar.

Teijin already provides PC-resin solutions for plastic glazing, including for train and automotive applications, leveraging PC resin’s competitive advantages over glass, including 200 times greater resistance to impact and just half the weight.

Teijin also will market its PC-resin window for automakers in the U.S. and the EU, where demands are increasing for PC-resin products that meet new safety standards.