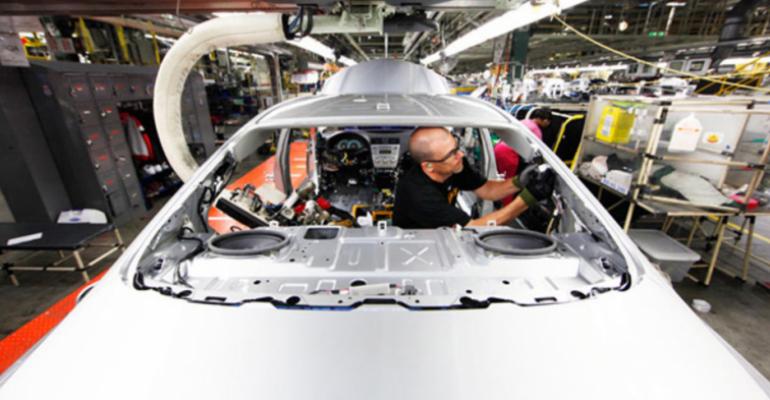 If you want news, you can always count on the automotive industry to provide it. In anticipation of a good 2014, Toyota Motor Manufacturing, Kentucky Inc., (TMMK) announced that construction is underway at the assembly line that will produce the first U.S.-made Lexus. The company announced last spring that it would bring production of the ES 350, never before assembled outside of Japan, to U.S.

The new facility is being built in Georgetown, KY, where the company's manufacturing facility currently employs approximately 6,600 people. Toyota makes the Camry, Camry Hybrid, Avalon, Avalon Hybrid and Venza models. It also manufactures both four-cylinder and V-6 engines. Some 500,000 vehicles and 600,000 engines are produced in the Georgetown facility.

"We're proud of our long history of building world-class vehicles in the Bluegrass, and look forward to raising the bar once again by adding Lexus to our lineup of Kentucky-made products," said Wil James, president of Toyota's Kentucky plant.

Toyota has a corporate-wide initiative to build vehicles where they are bought. Because the ES 350 sold nearly 30% better in 2013 than it did in 2012, the company believes it can better serve its customers with local production.

With the new assembly line, the company will create 750 new jobs with a $360 million investment. Production is scheduled to start in the fall of 2015.

The automotive industry is big in Mexico as well, and is about to get bigger. Nissan Motor Co. has started production at its third vehicle manufacturing in Mexico. Its $2 billion manufacturing complex in Aguascalientes, Mexico will raise the annual output capacity to more than 850,000.

In total, Nissan is capable of assembling 175,000 cars annually, and will initially produce the Sentra compact sedans, which are shipped to more than 20 markets globally. Nissan's production capacity in the Americas will reach two million units annually once the company's Brazil plant begins production during the first half of 2014.

In other news, MexicoNow reported that Diamler AG and Nissan announced that the companies will manufacture Infinity and Mercedes-Benz deluxe cars in the Aguascalientes Plant. Nissan will assembly the new Infinity Q30, a 4-door and hatchback compact model that will share the engine and some chassis components with Mercedes-Benz GLA, which is one of several models being considered for future production in Aguascalientes, said the MexicoNow report.

Johnson Controls Inc. has agreed to sell its automotive electronics business for $265 billion to Visteon Corp., as part of JCI's initiative to expand its investment in its Milwaukee-based building efficiency business as it reduces its focus on the cyclical auto industry. The acquisition will mean Visteon will become one of the world's top three suppliers of automotive cockpit electronics with combined annual sales of $3 billion, said a release from Visteon.

In the fiscal year ended Sept. 30, 2013, the business to be acquired by Visteon generated approximately $1.3 billion in revenue and about $58 million in EBITDA (earnings before interest, taxes, depreciation and amortization), said Visteon.

A release from Johnson Controls said that under the terms of the agreement, Visteon will acquire JCI's instrument cluster, infotainment, display, and body electronics products. The company previously sold the HomeLink product portion of its electronics portfolio to Gentex Corporation in September 2013.

According to JCI, this transaction will complete the company's divestiture of the automotive electronics business that in aggregate realized total proceeds in line with original expectations of more than $965 million. As the company stated in previous releases, JCI "elected to move away from automotive electronics as part of its broader strategy to focus on core businesses and reallocate capital to further diversify its portfolio and maximize shareholder value."

The business to be acquired from JCI provides automakers with driver information, infotainment, connectivity and body electronics products, said Visteon. The transaction involves about 4,800 employees including about 1,000 engineers, electronics specialists and designers at seven research and development centers in Europe, North America and Asia. The business has a diversified customer base, with BMW, Honda, Renault-Nissan, PSA Peugeot-Citroen and Ford representing about 72% of its annual revenue.

Visteon provided an update on its previously disclosed intentions to divest its automotive interiors business. The company intends to exit Visteon Interiors in three separate transactions targeted for signing in the first half of 2014, said Visteon. The transactions, assuming definitive agreements are concluded, are planned to be structured as stand-alone sales involving three separate buyers.