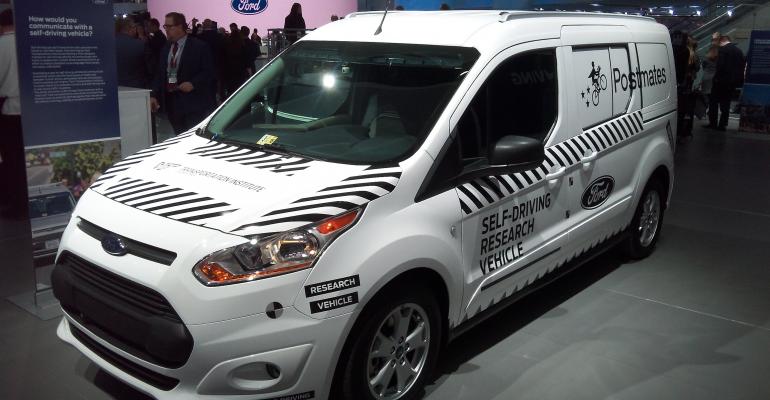 For fully self-driving cars to ever reach dealerships, automakers must first deal with testing, validation, and societal challenges.

Although the hardware and software technology for fully autonomous cars is ready today, the cars themselves may still be a decade or more away, vehicle experts said at the recent North American International Auto Show in Detroit.

The challenge for automakers and suppliers lies in test and validation, as well as in the education of consumers and marketers. “We certainly have the technology today for a (SAE) Level 5 prototype vehicle,” Kay Stepper, vice president of automated driving and driver assistance for Robert Bosch LLC, told Design News. “We have the sensors, ECUs, actuators, and the software stack. But next comes the challenge of testing and validation of a true Level 5 system. That’s a huge undertaking.”

Indeed, engineers at the show said that testing and validation of autonomous vehicles will be unlike anything in the auto industry’s 130-year history. The biggest challenge is the sheer number of possible scenarios that an autonomous car could face. With tens of millions of cars on the road, and millions of potential traffic situations, it’s virtually impossible for engineers to construct a set of all-encompassing solutions.

“You could spend years of testing and validation on public roads and not encounter every specific scenario that can happen in a vehicle’s life,” Stepper said.

Still, engineers have to find ways to make the technology work in every imaginable situation before putting fully autonomous cars on the road. One obvious way to do that is to test vehicles in the traditional ways – on test tracks and public roads. But because those time-proven methodologies can’t cover every possibility, they also need to use modeling and simulation. With models, they can simulate real-world scenarios using data collected from test cars. They can also vary those parameters and test for scenarios that haven’t been previously recorded. Finally, they can use “connectivity-based development,” in which fleets of vehicles relay mountains of traffic data to back-end servers for later examination. By culling through that data, they can capture records of real-world traffic dilemmas that can then be tested in hardware and software.

“We can get that data over the air,” Stepper told us. “A decade ago, we couldn’t do that.”

The problems of testing and validation are particularly vexing in the development of SAE Level 5 vehicles – that is, vehicles that must be able to handle every situation, all the time, without the aid of a driver. Until automakers have confidence that their vehicles can meet Level 5 criteria, most will focus on Level 4. Level 4 calls for automated vehicles to be self-driving in prescribed geographic areas, or on certain routes. By limiting the scope in this way, they can eliminate high-traffic and difficult weather scenarios, such as ice and snow, which might cause difficulties. And they can build confidence. Several automakers have announced that they intend to have Level 4 vehicles on the road by 2020 or 2021.

Ironically, the least-likely scenarios are the ones that are keeping engineers awake at night and causing the delay in getting full autonomy into the dealership. “We have to be able to handle not only the 99.99% of situations that are pretty straightforward, but also the last 0.01%,” Michael James, director of autonomous driving for Toyota, told Design News last year.

As difficult as the technical challenges may be, however, most engineers say that the autonomous car’s non-technical issues may be worse. Those include consumer acceptance, liability, and lack of public understanding.

Last year, a report from the American Automobile Association revealed that three-quarters of Americans feared the prospect of riding in a self-driving car, while only 10% felt safer sharing the road with driverless vehicles.

To address such issues, automakers have begun working on the softer side of the problem, as well. At the Detroit auto show, for example, Ford Motor Co. showed off an autonomous van with a light bar that communicates with pedestrians. The idea, Ford engineers said, is for the pedestrians to know what the car is thinking.

“Suppose I’m a pedestrian, and this autonomous car comes up to deliver a pizza,” noted Wayne Williams, research engineer for Ford autonomous vehicles. “I’d really like to know, as a pedestrian, whether this car knows I’m there and whether it’s going to start rolling if I walk in front of it.”

Ford says that it’s working with SAE and with the International Organization for Standardization to push for a standard way of enabling cars to communicate their “thoughts” to the world around them.

While engineers continue to work on that technology, many are also simultaneously trying to educate the public. Bosch, for example, has created an online “school” called the Automated Mobility Academy, which teaches consumers about the advantages, capabilities and limitations of automated driving. Similarly, the National Safety Council and the University of Iowa have teamed up to teach consumers about safety technology on a website called mycardoeswhat.org.

The educational efforts stem from the belief that, no matter how good the technology is, success won’t happen without public support.

“There are definitely two pieces to this,” noted Williams of Ford. “The technology piece is big. But the societal piece – that’s harder and a little more nebulous. No one is sure what’s going to happen there.”

Senior technical editor Chuck Murray has been writing about technology for 33 years. He joined Design News in 1987, and has covered electronics, automation, fluid power, and auto.

Building Better Latch Locks, and Other News from the Plastics Supply Chain
Apr 14, 2021