Despite the harsh winter weather and the resulting lackluster growth in the U.S. economy, business levels for manufacturers and suppliers of primary plastics machinery (injection molding, extrusion, blowmolding, and thermoforming equipment) recorded another quarter of solid growth in Q1 of 2014. According to statistics compiled and reported by the Committee on Equipment Statistics of the Society of the Plastics Industry (SPI), shipments of primary plastics equipment for reporting companies totaled an estimated $300.5 million in Q1. 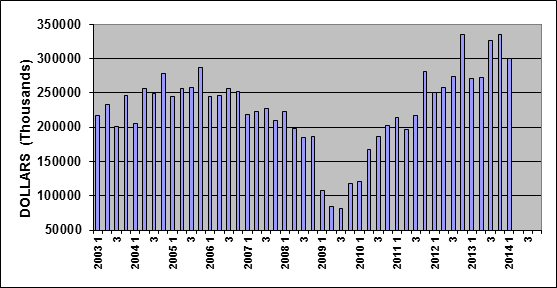 The CES also compiles data on the auxiliary equipment segment (robotics, temperature control, materials handling, etc.) of the plastics machinery industry. New bookings of auxiliary equipment for reporting companies totaled $98.6 million dollars in Q1. This represented a 6 percent gain when compared with the total from Q1 of 2013.

The gain in the CES data on plastics machinery shipments corresponds with the gains in the two major data series compiled by the US.. government that measure activity levels in the industrial machinery sector. According to the Bureau of Economic Analysis, business investment in industrial equipment rose by 5 percent (seasonally-adjusted, annualized rate) in Q1 when compared with Q1 of 2013. The other important machinery market indicator, compiled by the Census Bureau, showed that the total value of shipments of industrial machinery jumped 29 percent in Q1.

The CES also conducts a quarterly survey of plastics machinery suppliers that asks about present market conditions and expectations for the future. The responses from the Q1 survey were a bit more optimistic than they were in the Q4 survey, and they represent a continuation of the optimism that is broad-based across the industry. When asked about expectations for future market conditions, 93 percent of the respondents expect conditions to stay the same or even improve in the coming quarter, and 88 percent expect them to hold steady or get better during the next 12 months.

North America, Latin America and Mexico are the global regions where the strongest gains are expected, while expectations slipped a bit for Europe and Asia. As for the major end-markets, the respondents to the Q1 survey expect that automotive, medical and packaging will continue to be the strongest in terms of demand for plastics products and equipment. Expectations for the appliances sector continued to trend upward.