The pathway to industrial applications using biomass-based 5-hydroxymethylfurfural, or 5-HMF for short, has only just recently opened, due to scalable technology from a young Swiss company called AVA Biochem, a subsidiary of Ava-CO2. At the European Bioplastics conference last week, Thomas Kläusli, chief marketing officer at AVA Biochem, talked about the implications of the new technology for the future development of biochemicals and polymers based on this platform chemical.

The pathway to industrial applications using biomass-based 5-hydroxymethylfurfural, or 5-HMF for short, has only just recently opened, due to scalable technology from a young Swiss company called AVA Biochem, a subsidiary of Ava-CO2. At the European Bioplastics conference last week, Thomas Kläusli, chief marketing officer at AVA Biochem, talked about the implications of the new technology for the future development of biochemicals and polymers based on this platform chemical. "Right now, the single most interesting application is probably the synthesis of FCDA, a replacement for terephthalic acid in the production of polyesters," he said. "In other words, the possibility to make PEF instead of PET."

5-HMF is an organic compound derived from dehydration of certain sugars. The molecule consists of a furan ring, containing both aldehyde and alcohol functional groups. HMF, which is derived from cellulose, is a potential "carbon-neutral" feedstock for a number of chemical substances and was identified in 2010 as one of the top 10 most valuable platform chemicals by the United States Department of Energy. 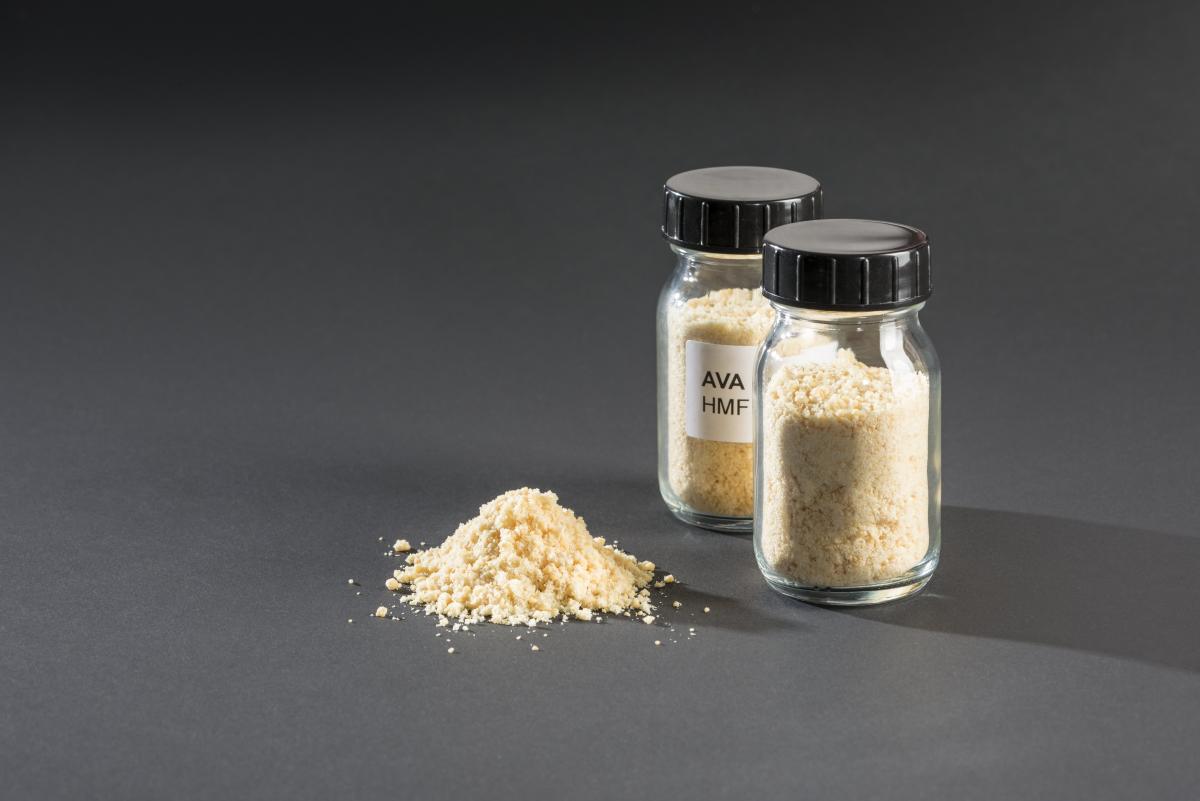 And, importantly: while biobased platform chemical production often lacks scale-up capability, which makes production costs uncompetitive with petroleum-based chemicals, in a technological breakthrough, Ava Biochem, in partnership with Karlsruhe Institute of Technology, has developed a method for the scalable, continuous and automated production of 5-HMF from biomass by means of hydrothermal carbonization (HTC). Hydrothermal carbonization (HTC) is a thermochemical process that converts biomass into a bio-coal material called HTC-coal.  The process makes it possible to use biomass with high moisture content as feedstock. The biomass is first hydrolyzed, and then dehydrated (or carbonized). 5-HMF is formed as an intermediate, which can then be extracted and purified to the required level of quality and purity.

The company started production of high-purity 5-HMF earlier this year at the Biochem-1 facility in Muttenz, Switzerland. AVA Biochem's plant currently has a capacity of 20 metric tons per year and bulk 5- HMF is within reach, thanks to the company's modified HCP-process. Moreover, when co-located with an efficient feedstock supply - sewerage sludge, for example - once at scale, bulk chemical price levels are achievable, which will allow for direct competition with petro-based chemicals. "Co-location is key to competitiveness," said Kläusli. "We'll probably be price competitive at 100 thousand tons a year."

Why is 5-HMF so interesting?

Kläusli: "5-HMF is the basis of over 20 performance polymers and 175 downstream chemical substances. Hence the opportunities for 5-HMF are truly enormous: the substitution of formaldehyde in phenolic resins, adhesives utilized as plasticizers or thermoplastics, to name but a few. But also FDCA."

The process is extremely efficient, requires no catalysts and uses only water as a solvent, which means there is no need to remove any contaminant later. "For us it was like: PEF is on the other side of a big mountain. And we found a way to go through the mountain, instead of having to go all the way around," Kläusli explained. "But we are not going to start producing PEF. We are a small company and we need a big partner to do that. "

"We're looking for partners, and are already talking to a number of big companies, including large PET producers," he added. "PEF is not just a replacement -it's an improved product. But there are still questions to be answered - such as, what about the recycling stream, can we organize that? There's a lot we don't know yet. What we do know is that it is a material with huge potential, in the first place as packaging, but also in the carpeting and textile market."