Ban the bags vs. Bag the bans: The fight rages on

The current population of California is estimated at about 37 million, according to the U.S. Census Bureau. That's how many people will be impacted by a potential statewide plastic bag ban.

The current population of California is estimated at about 37 million, according to the U.S. Census Bureau. That's how many people will be impacted by a potential statewide plastic bag ban.

California assembly member Marc Levine has introduced the legislation, Assembly Bill 158, to ban single-use plastic grocery bags throughout the entire state of California. If the ban becomes law, it would take effect Jan. 1, 2015, and grocery stores with more than $2 million in annual sales or retailers with more than 10,000 sq ft of floor space would be prohibited from providing single-use plastic bags to customers.

The legalization would allow those stores to provide recycled paper bags to customers from Jan. 1, 2015 to July 30, 2016. After that, the stores would charge a fee for paper bags. In addition, stores subjected to this bill would be required to make reusable grocery bags available for sale. 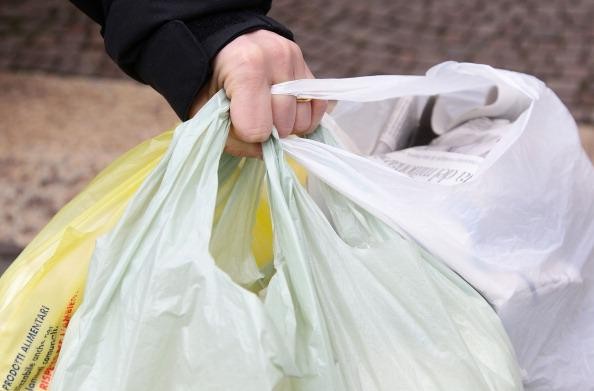 "This issue is being taken up at the local level in California as dozens of city councils and boards of supervisors consider resolutions banning plastic grocery bags. The elimination of plastic bags is inevitable and it is time for a statewide solution to this problem," Levine said. "I look forward to working with environmental advocates, plastics manufacturers, grocers, and retailers on crafting legislation that can be implemented expediently, effectively, and economically."

A similar style ban was introduced in 2010 and backed by grocers and then Gov. Arnold Schwarzenegger, but the Senate rejected the bill. Currently, about 47 municipalities in California have adopted an ordinance banning plastic bags.

If this bag ban bill goes through, there's no doubt it will make headlines. But while California is a trendsetting state in so many ways, it won't be the first state in the U.S. to pass such a law.

In May 2012, Honolulu county approved a ban of plastic bags at checkout counters, joining the state's three other counties that already enforced bans. This move made Hawaii the first to ban plastic bags statewide.

In Oregon, the cities of Portland, Eugene and Corvallis have banned plastic bags. A statewide ban of plastic bags failed in 2011, and while the bill has returned to the senate, it has not found a sponsor yet.

"It's a ridiculous ban; these bags take up a tiny fraction of the waste stream. If you ban plastic bags, what's next, going to ban books? The senate already banned BPA in baby bottles, so it proves our senate likes to ban things," he told PlasticsToday. "To tell you the truth, I'm disappointed plastic companies aren't doing more to fight the bans."

A tale of two attorneys

San Francisco Superior Court Judge Teri Jackson ruled that the ordinance was valid following a lawsuit filed by the Save the Plastic Bag Coalition, which claimed that the city had banned plastic bags without conducting an environmental review. For instance, the coalition says that municipalities must first determine the environmental impacts caused by the increased consumption of paper bags that would result from a plastic ban.

Save the Plastic Bag Coalition attorney Stephen Joseph said that they are confident that this ruling will be overturned on appeal.

The Save the Plastic Bag Coalition, an organization that "is questioning and challenging the misinformation, myths, exaggerations, and hype spread by anti-plastic bag activists," has filed similar suits against the cities of Santa Cruz, Long Beach, Palo Alto and Oakland.

Carpinteria, a small oceanside city located in Santa Barbara County, had voted to ban all single-use bags, which included both plastic and paper. The Save the Plastic Bag Coalition filed a lawsuit, citing California health and safety codes, which claim the state is the only one that can regulate food transportation and that restaurants should not be included in the ban.

A settlement was eventually reached and the Carpinteria City Council agreed to make some changes to the ordinance and exempt restaurant plastic bags. In addition, according to the Santa Barbara Independent, the council had to pay the coalition $11,500 in attorney fees.

Joseph said they hope these lawsuits will get cities, counties and the public to "learn the truth about plastic bags and the alternatives, instead of relying on myths and misinformation."

"That's what an Environmental Impact Report is supposed to do - provide environmental information, not misinformation," he said. "Plastic bags receive criticism, because they have been subject to a campaign of myths, misinformation and exaggeration."

Joseph didn't set out to become the poster child for lawsuits against bag bans, he first gained notoriety when he sued Kraft Foods to have trans fat removed from Oreos; he also sued McDonald's for "fraudulent" advertising about trans fat. In 2006, Oreos replaced the trans fat in the cookies and McDonald's announced in 2008 that the company's fries are trans fat-free.

Plastic bag manufacturers contacted Joseph after San Francisco had passed its first bag ban. He said that he refused to get 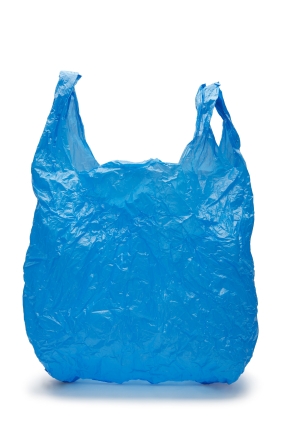 He changed his mind and started the "Save the Plastic Bag" campaign.

"Environmental greenness is in the eye of the beholder," he said. "If another city banned paper bags and reusable bags and only permitted plastic bags, environmental organizations would protest."

He believes plastic bag bans provide a boost for paper bags as well as a "huge profit generator for the retailers who used to provide carry out bags for free and now are selling them at a profit at the expense of their customers."

Joseph said that it would be a mistake for the plastics industry to think this is only about bags.

"Have you talked with Stephen Joseph yet? He's kind of my arch enemy," said Jennie Romer, founder of the site PlasticBagLaws.org.

Romer, the current Atlantic region director of the Clean Seas Coalition, said her obsession with bag bans began during her research project in law school about these bans.

She found it difficult to find information about legislation and various ordinances about bans and taxes, so she thought it would be helpful for local governments to have a website that could be used as a resource. In an effort to facilitate research for cities and states interested in adopting plastic bag laws, the site has compiled the text of laws, related litigation and relevant studies.

While the original focus was on single-use bag ordinances in California, the site has expanded its focus to the East Coast, specifically in New York City.

"There is definitely momentum toward single-use bag ordinances," Romer said. "Listen, I don't have a problem with plastics, I have a problem with single-use plastics that are manufactured and used in an irresponsible way. Think of all the pictures out there showing the amount of plastic bag pollution. Something needs to change, rather than simply blame the consumers."

Romer said that she personally prefers bag fees to bans. When she consults with cities in other states, she said she first recommends putting a charge on plastic bags. She said fees allow people to have a choice at the register, and they can determine for themselves how many bags they need and want to pay for.

In June 2009, the Washington D.C. Council passed a 5-cent tax on paper and plastic grocery bags that become effective June 2010. Before the bag went into effect, city officials estimated that 22.5 million bags were issued each month, according to The Washington Post.

It was reported by The Washington Examiner that the city experienced a drop in the bag fees collected. According to statistics from D.C.'s chief financial officer, the collection was down 11% in 2012, from $1.8 million in 2011 to $1.6 million. The publication quoted Mayor Vincent Gray saying the fee "is accomplishing what it set out to do."

"That to me shows that the 5-cent fee can drastically reduce the amount of bags consumed," Romer said. "When you put a value on it, such as 5-cents, consumers are more likely to only buy it when they need it and probably reuse it more. Instead of getting something for free that ends up under their sink for a long period of time."

This summer while some of the best athletes in the world geared up for the London 2012 Olympics, a London-based grassroots campaign pushed for a plastic bag ban at the games. The group, called Greener Upon Thames, launched its campaign in 2010 to ban plastic bags at the London Olympics. The campaign was packed by high-profile names, which included Richard Branson and British fashion designer Vivienne Westwood. 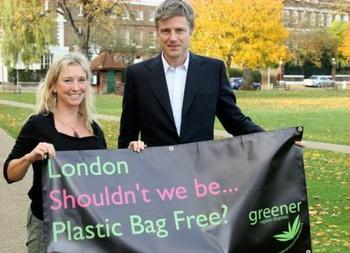 In 2011, London Mayor Boris Johnson called for a ban on plastic bags across London and said, "I've set out my ambition to make London a plastic bag free city.

New data showed a rise in the number of single-use carrier bags used by supermarket customers across the UK during 2011, compared to the previous year, according to UK's Waste and Resource Action Program (Wrap).

"Okay, so what is the viable alternative if plastic bags are banned?" said Sukhraj Poonia, research and communication manager for PAFA. "I always ask this question after there is a call for a ban or levy - 'what is the bottom line you're trying to achieve?' Because it seems that consumers are then forced to use environmentally damaging alternatives."

The United Nations Environment Program called for a worldwide ban on plastic bags in 2009. Achim Steiner, UN under-secretary-general and UNEP executive director, said, "Some of the litter, like thin-film single-use plastic bags, which choke marine life, should be banned or phased-out rapidly everywhere. There is simply zero justification for manufacturing them anymore, anywhere."

Since that announcement, Italy became the first country in Europe to ban non-biodegradable bags. Other countries have banned thin plastic shopping bags, including China, South Africa, Uganda and several states in India.

Toronto had previously passed a mandatory 5-cent fee for plastic bags. In June 2012, the councilors voted to end the tax and place a full ban on single-use plastic bags.

In weeks leading up to a decision, the city faced legal challenges from the Ontario Convenience Stores Association and the Canadian Plastic Bag Association in regards to the proposed bag ban.

City councilors received confidential legal advice from a solicitor before voting not to proceed with the ban. Still, this announcement is not a done deal. The council will revisit this issue in June 2013.

"One of the many problems of these bans is taking away consumer choice," said Carol Hochu president and CEO of the Canadian Plastics Industry Association. "Another item to consider, if this ban goes through, what is stopping bans from extending to other plastic products?"