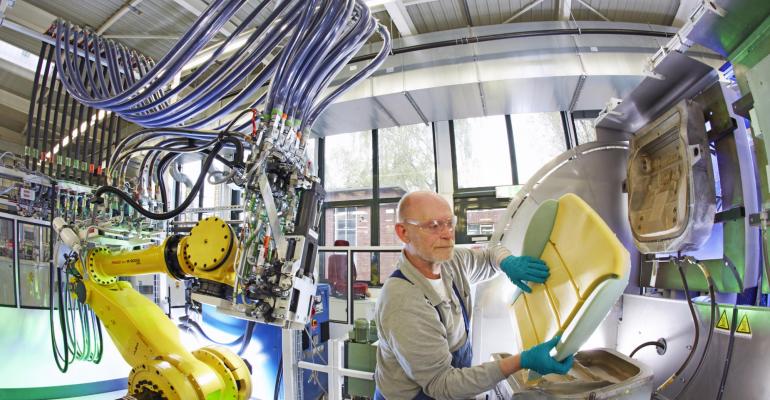 Leverkusen, Germany — Breakthrough innovation and sustainable thinking: these are the pillars on which Bayer MaterialScience will continue to build commercial success as an independent company in the future, said Richard Northcote, a member of the company's executive committee, at the "Innovations with High-Quality Materials" get-together that took place yesterday in Leverkusen (Germany). He emphasized, however, that the one is inextricably bound up with the other:  "Innovation is tied to sustainability," he said.

Leverkusen, Germany — Breakthrough innovation and sustainable thinking: these are the pillars on which Bayer MaterialScience will continue to build commercial success as an independent company in the future, said Richard Northcote, a member of the company's executive committee, at the "Innovations with High-Quality Materials" get-together that took place yesterday in Leverkusen (Germany). He emphasized, however, that the one is inextricably bound up with the other:  "Innovation is tied to sustainability," he said. "People, planet, profit - we are pursuing this approach rigorously and with increasing intensity. We intend to and will live sustainability everywhere at Bayer MaterialScience."

The company is gearing up enthusiastically for independence. "BMS has three business units - Polycarbonate, Polyurethanes and Coatings, Adhesives and Bondings. Plus the facilities and knowhow to provide support to customers. We have a well-stocked innovation pipeline and, with a staff of 1200 at our three dedicated research centers around the world, the capability to continue to generate innovations," said Ulrich Liman, head of Innovation at Bayer MaterialScience.  "Systematic innovation management helps us to select the most promising from the multitude of ideas, and then to manage the corresponding projects efficiently and with a focus on success."

One current innovation from Bayer MaterialScience is a polyurethane-based infusion resin for the production of wind turbine rotor blades. Wind energy is a new industry for Bayer. "But it's one that is very promising for the future," said Liman.

Bayer has developed a new method that significantly reduces the time needed to produce a rotor blade. Whereas it can take 24 hours to produce a single rotor blade using conventional technology, Bayer's technology, in which the fiber mats are bonded together using polyurethane instead of epoxy resin, can shorten the process by up to seven hours. Moreover, the newly developed PU resins have significantly better flow characteristics than the conventional materials. The resultant rotor blades are lighter and more breakproof than traditionally made blades.

Another highlighted innovation was the technology developed only a few years ago for the automotive industry called DirectCoating/DirectSkinning, which allows coated components to be manufactured efficiently in a single step. In this process, a plastic substrate is injection molded in the first cavity of a two-component mold. When it is then placed in the second cavity of the mold, a narrow gap results that is flooded with a polyurethane coating as the second component. After opening the mold, the ready-coated part can be removed immediately for further processing.

Project Manager Christoph Gürtler then briefly talked about the progress made on BMS's Dream Polymers project, in which the company is developing CO2-based building blocks for plastics. In the new process developed by the company, carbon dioxide is used twice. First, the greenhouse gas is incorporated directly into a new kind of precursor (polyoxymethylene polycarbonate polyol, POM PET), replacing 20 percent of the petroleum. Second, it is also used indirectly, producing a chemical that is also incorporated into the precursor for a further 20 percent saving in petroleum. "As a result, the proportion of alternative raw materials is already 40 percent," said Gürtler.

The event at Bayer MaterialScience closed with a tour of the new Polyurethanes Technical Center in Leverkusen, built to better support customers in gearing their production to current market demands. This two-digit million investment is equipped with the latest facilities and enables high efficiency and productivity in product development to find solutions for the challenges facing our society today. Here, the company is working, among other things, on the development of even more sophisticated insulation systems for energy efficient refrigerators, as well as applications in the cold chain and piping insulation for district heating.