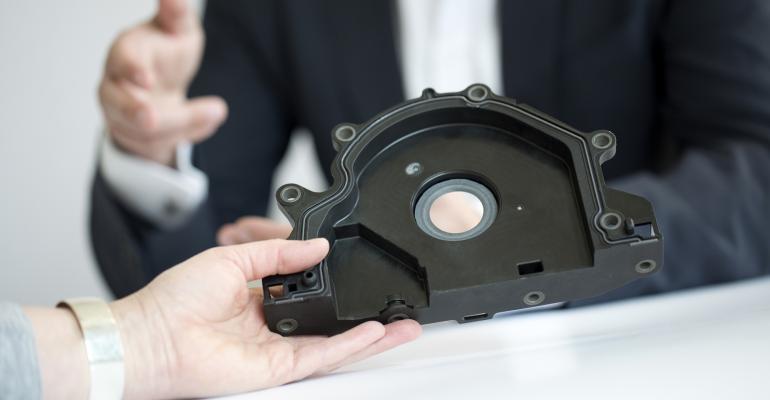 A lightweight multi-functional crankshaft cover in the bio-based polymer came top in the Powertrain category at the Society of Plastics Engineers Automotive Division Innovation Awards Competition and Gala in Detroit on November 12. The part was molded from its EcoPaXX high performance polyamide 410 supplied by DSM Engineering Plastics (Singapore).

A lightweight multi-functional crankshaft cover in the bio-based polymer came top in the Powertrain category at the Society of Plastics Engineers Automotive Division Innovation Awards Competition and Gala in Detroit on November 12. The part was molded from its EcoPaXX high performance polyamide 410 supplied by DSM Engineering Plastics (Singapore).

The EcoPaXX crankshaft cover is produced by DSM's automotive component specialist partner KACO in Germany for the latest generation of MDB-4 TDI diesel engines developed by the Volkswagen Group. The engines are fitted to various car models made by VW, Audi, Seat and Škoda. Dr. Lutz Wohlfarth from Volkswagen, and Marcio Lima from KACO were both at the Gala in Detroit to collect the SPE award.

The SPE recognized the numerous environmental and economic advantages of the new part and the technologies used to make it. The EcoPaXX crankshaft cover weighs around 40% less than a crankshaft cover with similar geometry made in aluminum, and so represents an important step in improving fuel efficiency in cars. Because the finished cover weighs so much less, vehicles run more efficiently, saving fuel and reducing carbon dioxide emissions throughout their lifetime.

KACO produces the crankshaft covers in an integrated fully automated process that involves insert molding a 50% glass fiber reinforced grades of EcoPaXX polyamide 410 over a plasma-activated dynamic PTFE seal, and then co-molding this with a liquid silicone rubber static seal. KACO itself developed and patented the plasma process, which replaces a wet activation process involving solvents.

"The partners in this project have taken a holistic approach to sustainability," says Andreas Genesius, head of project management at KACO. "In the application itself, the dynamic PTFE seals reduce friction to a minimum; the manufacturing process is completely waste-free; and the part makes substantial use of sustainable materials." EcoPaXX is derived 70% from renewable resources, and is certified 100% carbon neutral from cradle to gate.

In addition to these environmental advantages, there is a significant cost advantage in using EcoPaXX instead of aluminum. The total system cost can be up to 25% less than that for a similar die-cast aluminum crankshaft cover design. This is the first time that EcoPaXX has been used in a powertrain component.

The material had to meet a series of very demanding specifications, including very low water absorption for dimensional stability; high resistance to stress over a wide range of temperatures (operating temperatures range from -40°C to +150°C, with excursions up to 170°C); resistance to engine oils and diesel fuel; and the ability to bond, not only to the LSR and PTFE seals, but also, during engine assembly, to the cast iron engine block and to a second silicone seal on the oil sump.