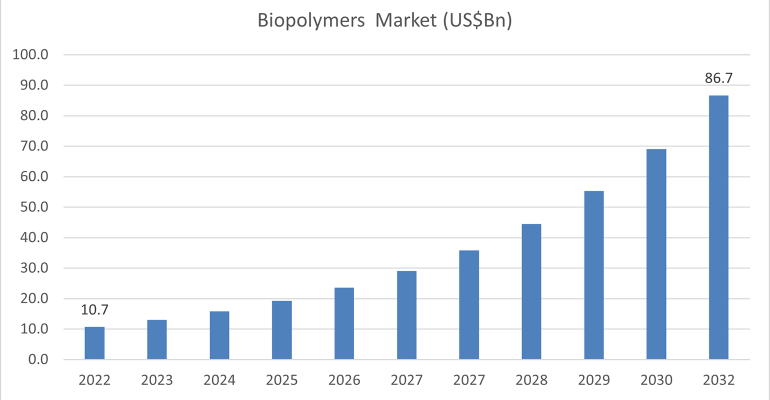 Widespread biopolymer growth is charging full-speed ahead in what's projected as a bull-market run over the next 10 years.

That’s according to a new bioplastics market report from Prophecy Market Insights, which anticipates yearly growth at 22.4% to propel the value from $10.7 billion in 2022 to an estimated $86.7 billion by 2032.

The report analyst says, “biopolymers have been found to be biocompatible and biodegradable, making them useful in various applications such as food films, emulsions, for packaging materials in the food industry and drug transport materials, medical implants, wound healing, tissue scaffolds and dressings. Biopolymers innovation is increasing worldwide, due to technological developments in biopolymers products that are more efficient in use.”

Biopolymers are polymers produced from natural sources, they can either be chemically synthesized from biological materials or biosynthesized by living organisms. They are composed of monomeric units joined together by covalent bonds, these monomeric units form larger molecules, as biopolymers are derived from living organisms such as plants and microbes and are a renewable resource, unlike most polymers which are petroleum-based polymers.

Generally, biopolymers are biodegradable, applicable for a variety of industries ranging from food industries to manufacturing, packaging, and biomedical engineering. Biopolymers are promising materials due to their characteristics such as abundance, biocompatibility, and non-toxicity. There are three main classes of polymers, classified according to the monomers used and the structure of the biopolymer: polynucleotides, polypeptides, and polysaccharides.

Biopolymers are used in the biomedical field due to their biodegradable and non-toxic, biocompatible properties, and other attributes where they are used in tissue engineering, pharmaceutical industry, drugs, drug delivery, and more.

Polypeptides are cheap and readily available, thereby finding use in various applications in biomedical materials due to their unique properties.

These are widely used in packaging, especially polylactic acid (PLA), which is cheap and readily available because it is sourced from corn.

In the automotive industry, biopolymers are used for interior and exterior parts, electrical components, engines, exhausts, steering wheels, and other components.