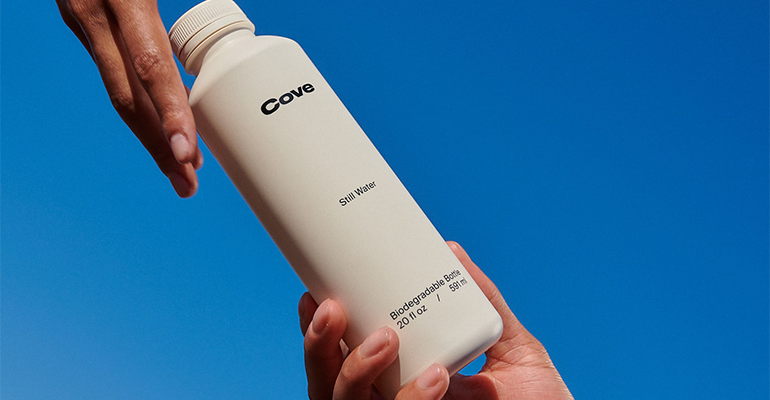 A Cove bottle will disintegrate in 90 days in an industrial compost facility, and "less than five years" if left outside.
Made of polyhydroxyalkanoate (PHA), the industrially compostable Cove bottle will be sold in Erewhon stores in Los Angeles starting December 1.

Cove's 20-ounce water bottles will sell for $2.99 at all six Erewhon stores throughout Los Angeles starting December 1, as well as online at cove.co. Cove plans to announce new retail partners in coming months as they scale manufacturing at the Los Angeles facility.

The sparse graphics printed on the bottle front, which are printed with an algae-based ink according to Bloomberg, state “Biodegradable bottle".

"Cove entering retail is a significant milestone for the company,” says Alex Totterman, founder and CEO of Cove. “It was important for us to find a mission-aligned retail partner to debut Cove. [We're] excited to take a big step forward in our mission to create a sustainable material world. Erewhon will also offer a valuable end-of life-option for our customers by allowing them to deposit their used Cove bottles into their bins for compostables, which will then be routed to a local compost operation for biological recycling."

"We were incredibly excited to be part of this innovative and potentially world-changing moment."

"Erewhon has celebrated the amazing benefits of naturally grown foods and the importance of preserving the earth for more than 50 years and continues to lead the way in conscious consumption today," states Vito Antoci, executive vice president of Erewhon Markets. "When we were introduced to Cove, we were incredibly excited to be part of this innovative and potentially world-changing moment for consumer packaged goods companies— the world's first fully biodegradable water bottle is something we are very proud to be launching at Erewhon."

Left in the environment, the bottles will disintegrate in water and soil in less than five years.

The forthcoming launch is the culmination of four years’ research and development by Cove. Backed by a group of investors including Valor Equity, Marc Benioff, James Murdoch, Tony Robbins and Peter Rahal, Cove was named the Plastic-Free Innovation of The Year in 2019 by Dieline.

It’s the latest news pointing to increased interest in bioplastics in general and PHA in particular; the PHA market is expected to grow 5.4% yearly to 2029, reports Data Bridge Market Research.