Bioresorbable plastic stents will be a big story in 2014 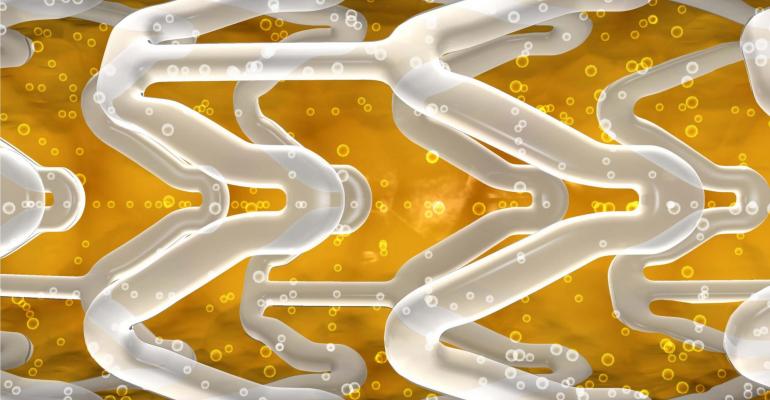 One of the biggest stories in medical plastics in 2014 will be the increasing use of bioresorbable drug-eluting stents for treatment of coronary artery disease.

One of the biggest stories in medical plastics in 2014 will be the increasing use of bioresorbable drug-eluting stents for treatment of coronary artery disease.

Abbott Laboratories (Abbott Park, IL) is expanding U.S. trials for its Absorb Bioresorbable Vascular Scaffold (BVS), a mesh tube made of polylactide.  The purpose of the device is to open a blocked blood vessel, restore blood flow while preventing any immediate further hardening of the artery, and then dissolve and leave the body. All that remains are two metallic markers that allow physicians to see precisely where the stent had been placed.

Abbott uses the word scaffold to refer to its device to differentiate from metallic stents, which are permanent.

The Absorb III clinical trial is expected to include 2,250 patients, mostly in the United States. "The primary endpoint of the trial is target lesion failure, a combined measure of safety and efficacy, at one year compared to standard treatment," says Jill Fonte of Sansum Clinic (Santa Barbara, CA). "In addition, a subset of patients within the trial will be evaluated for novel endpoints such as vasomotion, a measure of how much natural motion returns to the vessel as Absorb dissolves into the arterial tissue."

"Dissolvable stents may be a future game-changer for the way we treat coronary artery disease and heart attack in the United States if proven to show clinical benefit in this nationwide clinical trial," says Samin K. Sharma, MD, director of Clinical and Interventional Cardiology at The Mount Sinai Medical Center (New York), which is also enrolling patients in the study. "The stent is designed to open a blocked heart vessel and eventually dissolve and disappear, leaving no remnants on the heart of a cardiac interventional procedure." Mount Sinai hopes to enroll 50 patients.

Recently, Absorb BVS became commercially available in Europe, India, and parts of Latin America and Asia. More than 1,000 patients have been treated with the device.

Data from the newest clinical trial will be used to support the U.S. regulatory filing of Absorb.

Development of bioresorbale stent technology was announced in 2003, but manufacturers have been working to develop designs and formulations of safe materials that have adequate strength.