Design bureau Worrell (Minneapolis, MN) announced a partnership with 3D printing leader Stratasys (Eden Prairie, MN) in October 2014 to offer 3D printed injection molding (3DIM) services to medical device manufacturers. Their value proposition is compelling: It typically takes just one or two days to 3D print a mold and start producing parts. Nadav Sella, Director, Manufacturing Tools, at Stratasys and Worrell's Derek Mathers, Business Development Manager, discussed the concept with PlasticsToday, in advance of a session that they will be leading at the MD&M East conference and exhibition next month in New York City.

"The medical device industry is facing budget crunches and tight time constraints to determine if a product is going to take off in the marketplace," says Sella. A rigorous regulatory process compounds the complexity, he adds. Consequently, "finding ways to save on tooling costs is a big issue, and that's where the advantages of 3DIM become apparent."

Worrell's Mathers puts it in broader philosophical terms. "We are not going to evolve as a species just by making faster prototypes. The 3D printing industry has the opportunity to revolutionize manufacturing by expanding printable material options, reducing the cost of [appropriate] materials and, most importantly, by combining the best attributes of traditional manufacturing with new digital techniques," says Mathers. And that is how this partnership intends to move the needle on cost reduction and time to market for medtech manufacturers. 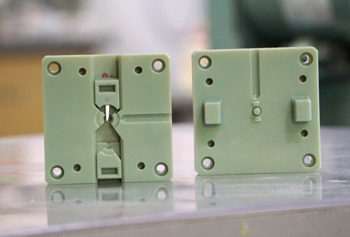 Worrell is a design firm with a deep footprint in the medical industry, says Mathers. "We are not an injection molding company," he stresses, "and this holds an advantage for our medtech customers." The company's orientation helps its design engineers to "better understand how a part will work in manufacturing, since they will also be the individuals who are creating the molds," says Mathers. The molds are designed in SolidWorks and can be printed overnight on a Connex500 3D printer. "We can start shooting the parts the next day," he adds.

Being able to use the Connex500 to print early prototypes as well as multi-material prototypes that integrate plastics and rubber, and then using the same machine to print molds is the key reason Worrell chose this particular 3D printer, says Mathers. "And because we are 3D printing the molds from the bottom up, layer by layer, we can print in complex slides, pick outs and ejection systems with no increase in cost," he adds.

Of particular benefit to medtech manufacturers, adds Mathers, is the ability to mold the part in the final, specified material and go immediately into pre-clinical testing and usability/human factors testing to establish safety and efficacy. "This is a very expensive and critical part of the process, and 3DIM can speed it up because of the ease with which design iterations can be made."

The technology does have limitations. While the quality of the molded part is geometry dependent, "we are generally molding 50 to 100 parts per mold at 0.005 inches before the mold wears out of spec," says Mathers. The surface quality won't match that of an aluminum mold; however, Worrell is able to sand the molds to remove layer lines at a 30-micron printing resolution. The company is also limited by the size of the Connex500 print bed and shot size of the Toshiba 85-ton press, Mathers adds. While a range of materials can be used—ABS, PC, TPUs, TPEs, PP, PE and more—the process is not suitable for high-melt polymers such as PEEK and Ultem.

As PlasticsToday reported earlier this year, the 3D-printing sector has tripled in value in the past four years, reaching $4.1 billion, according to the Wohlers Report, the industry bible. That spectacular growth is being driven by the use of 3D printers to create functional, end-use parts, not rapid prototyping, which is a mature technology, points out Mathers. And while it may not be evident in other areas, in this respect, at least, it does appear that the evolution of the species is moving forward.

Mathers and Sella will address the value of 3DIM for the medical technology industry at the upcoming MD&M East conference and tradeshow in New York City next month. Their session, Accelerating Medical Device Development Through the Use of 3D Printed Injection Molding, is scheduled for Thursday, June 11. MD&M East is co-located with PLASTEC East at the Jacob K. Javits Convention Center from June 9 to 11, 2015.