Boeing soars at Paris air show, but supply chain has trouble keeping up

After what some described as lengthy negotiations, Boeing (Chicago) and AerCap (Schiphol, Netherlands) announced an order for 100 737 MAX 8 airplanes today (June 16) at the annual Paris Air Show. The order, valued at $10.7 billion at current list prices, is the first 737 MAX order for AerCap, and the biggest order so far at the Paris Air Show, according to a release from Boeing.

After what some described as lengthy negotiations, Boeing (Chicago) and AerCap (Schiphol, Netherlands) announced an order for 100 737 MAX 8 airplanes today (June 16) at the annual Paris Air Show. The order, valued at $10.7 billion at current list prices, is the first 737 MAX order for AerCap, and the biggest order so far at the Paris Air Show, according to a release from Boeing. 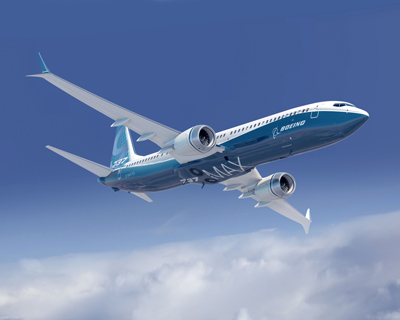 Other Boeing announcements on Tuesday included a commitment from Ruiti Airlines, a low-cost Chinese airline, for 30 planes from the 737 MAX range and a preliminary deal for 30 737 planes from Chinese leasing company Minsheng Financial. Ireland-based leasing company SMBC Aviation Capital ordered 10 of the 737 MAX 8 jets, worth up to $1 billion. Korean Air announced its intent to purchase 30 737 MAXs and two additional 777-300ER (Extended Range) jetliners, with options for an additional 20 737 MAXs, in a deal worth approximately $3.9 billion at current list prices.

Airbus didn't do so badly, either, showcasing deals on Monday and Tuesday that included Japanese low-cost carrier Peach Aviation, which purchased three A320 jets; Korean Air could buy up to 50 A321neo planes, the revamped A320. Airbus CEO Fabrice Brégier spoke to the Associated Press predicting that his company would bring in a total of 200 orders and commitments this week.

While the buying spree continues to accommodate an increasingly airborne public, both Airbus and Boeing have concerns with their supply base's ability to keep up. In one news piece, it was noted that Airbus is having problems getting enough seats to meet demand, with the reporter noting that supply chain challenges are the "big discussion" at the Paris Air Show.

A recent study from Deloitte, "2015 Global Aerospace & Defense Industry Outlook," reveals a strong aircraft industry. "Over the next decade by 2025, commercial aircraft annual production levels are anticipated to increase significantly by an estimated 20%," according to Deloitte. "With such growth expected, there are two significant trends and challenges to consider: The entrance of new global competitors to the existing duopoly and the impact on the supply chain."

The supply chain is "challenged to keep pace with OEM customers to dramatically increase the rate of production of components, systems and services," said Deloitte. "Over the past decade, many aerospace suppliers have successfully met customers' challenges by changing their business model." Examples include investing in non-recurring R&D costs in new aircraft production programs, hiring design engineering staff to produce detailed designs for parts, investing in tooling for manufacturing and managing a cadre of lower tier suppliers themselves. However, many aerospace suppliers have struggled to meet the new expectations and investment requirements.

Deloitte's report noted that it is expected that the aerospace supply chain will continue to transform, and will likely consolidate further, while some smaller companies simply may not be able to afford investing in the industry going forward. The trend to consolidate by part family (i.e., components, aero-structures, electronics, interiors and so forth) may continue for the next few years, in order to gain economies of scale and to provide the required investment in people and tooling. Competitive pricing in this supply chain is also anticipated to be an ongoing challenge in 2015, said Deloitte. "It is likely that 2015 will bring mid to high single-digit levels of growth in the commercial aerospace sub-sector, given the rate increases expected and production forecasts of the aircraft manufacturers."

It would appear that the aircraft industry and its suppliers are under many of the same pressures as the automotive industry. While transportation is a huge manufacturing sector, these issues create challenges for suppliers that, at some point, they will have to resolve, most likely through consolidation into companies large enough with the financial wherewithal to ride out the turbulence.