Checking the Pulse of PVC, PET, and PE Markets 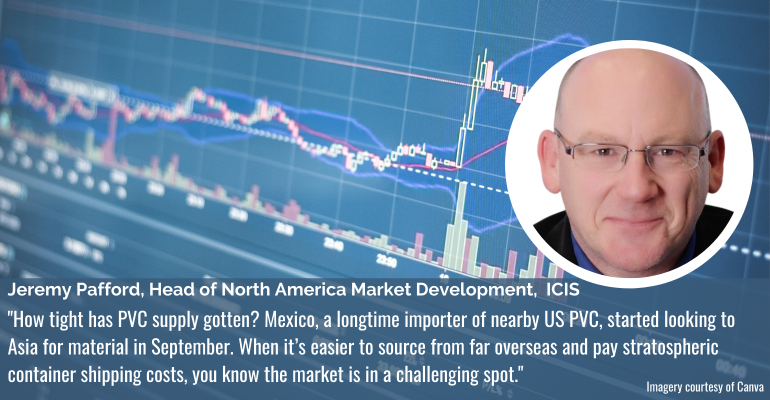 Production costs for plastic polymers are at highs for the year due to tight supply, increased feedstock costs, and strong demand.

For the first time in more than year, it’s live conference time again, and that alone feels great even if we are all still trying to muddle through the pandemic. PackExpo 2021 takes place in Las Vegas next week and, judging by the expected attendance numbers, there is substantial desire among packaging supply-chain participants to get together to discuss business and innovation.

There is much to talk about, especially from the markets that supply the chain with resins that have been difficult to produce and difficult to ship at various times during the last year and a half. Over that period, Murphy’s Law of what could go wrong most certainly has dominated the Ten Commandments tablets' list of "thou shall nots" for the plastics supply chain. If there were such tablets, I’m sure they’d be made of acrylonitrile butadiene styrene (ABS). Of course, the production costs would be at highs for the year due to tight supply, increased feedstock costs, and strong demand — not unlike these three critical markets of interest heading into Pack Expo.

About 60% of US production was offline in mid-September, mostly due to Hurricane Ida’s track through the Baton Rouge, LA, area where a great deal of US PVC capacity is clustered. Adding to the hurricane outages was Texas PVC plant that had to idle because a force majeure at a neighboring upstream plant that feeds into it.

How tight has PVC supply gotten? Mexico, a longtime importer of nearby US PVC, started looking to Asia for material in September. When it’s easier to source from far overseas and pay stratospheric container shipping costs, you know the market is in a challenging spot.

Expectations are that US PVC production will not return to strong operating rates until October at the earliest, which should keep the bullish pressure on already-record high prices in the near term.

Here’s another marketplace riddled with production problems, although most have generated from upstream of PET. Continued strong demand for consumer goods has led to particular challenges for PET procurers in a market that relies on resin imports. Upwards of 25% of US PET consumption comes from imports, and while neighbors Mexico and Canada are towards the top of the list, a majority of those imports come from Asia and thus are subjected to container shipping rates that are as much as six times more expensive than last year.

Just in the last month, importers have seen a 10 cents/lb increase in ocean freight costs for shipments to the west coast and an 8 cent/lb increase for shipments to the east coast, according to ICIS. That has led to a flurry of surcharges in the PET market, and with the container shipping challenges showing few signs of abating, one wonders if more surcharges will be in the offing.

PET demand could see some seasonal decline as winter draws near and less drink bottles are consumed, but consumer demand has fooled many during this pandemic. So long as consumer goods remain in high demand, so will PET.

As reported by Chemical Data (CDI), supply levels rose to near record levels in July following a strong inventory build. However, Ida-related outages at some PE and alpha olefins plants could result in renewed restrictions in supplies. After many months of contract price increases, August finally brought stable pricing based in large part on those record inventories. But where we go from here will require navigating the rest of hurricane season unscathed and for upcoming autumn turnarounds to be completed without issue.

Several US PE plants are scheduled for maintenance in the September-November period, and that work is necessary due to how hard these plants have been running (that is, when natural disasters such as hurricanes and a Gulf Coast freeze haven’t sidelined them) to keep up with robust consumer demand. The build in inventories along with plants still online cranking out grades of PE should keep the market well supplied during that period, but a well-placed storm on the Texas or Louisiana coast would change the dynamics abruptly. We dodged a bullet in early September with Hurricane Nicholas’ landfall in Texas; let’s hope for the supply chain there are no more bullets to dodge this year.

Visit ICIS and Chemical Data (CDI) at PackExpo in booth SL-6169 on Sept. 27-29 to talk resin markets, supply and demand, and our views on what 2022 could hold. We look forward to seeing you!

Jeremy Pafford, head of North America market development, drives ICIS’s business development strategy for the US, Mexico and Canada and represents ICIS to chemical and polymer markets to showcase the company’s expertise. Pafford draws upon experience in leading engagement efforts by the Americas team over the last several years.