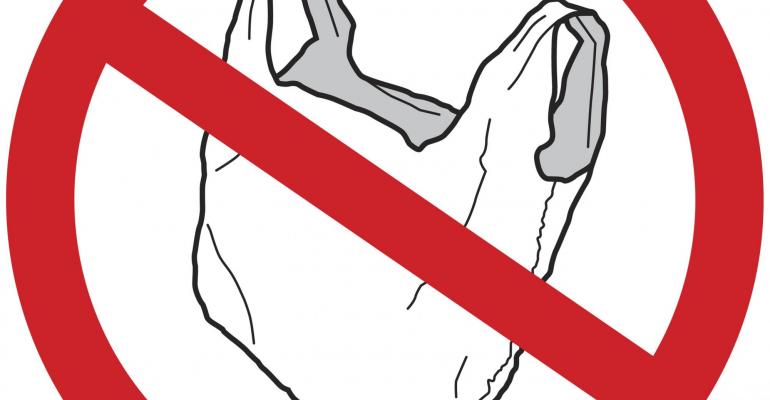 A study from the National Center for Policy Analysis claims that a ban on plastic bags used by grocers and retailers can negatively impact sales in the ban area and increase sales among stores just outside the bag ban region.

A study from the National Center for Policy Analysis claims that a ban on plastic bags used by grocers and retailers can negatively impact sales in the ban area and increase sales among stores just outside the bag ban region.

The NCPA surveyed store managers in Los Angeles County, where a ban of thin-film bags took effect in July 2011. The group conducted a survey of 80 large stores such as supermarkets and variety shops affected by the ban.

Additionally, each large store in unincorporated Los Angeles County was matched with one or two other stores within two miles and also in an incorporated area. The stores were matched in order to compare the effect of any displacement of commerce due to the ban. 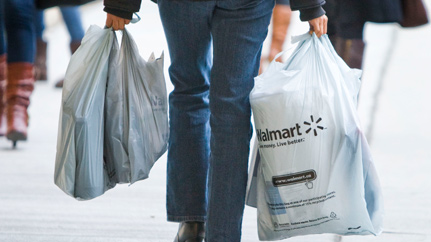 The study also sought to determine if consumers changed their shopping behavior by increasing purchases at stores that could still offer plastic bags. Pamela Villarreal, NCPA senior fellow, told PlasticsToday it was interesting to find that consumers chose to shop at stores unaffected by the ban.

"What we suspect is people that live in an area under a bag ban, but are in close proximity to an area without one, will 'vote with their feet,'" she said. "We often hear that people oppose plastic bags, but it sure does look like a lot of people do like them."

The NCPA survey said that stores under the bag ban also experienced a 10% reduction in employment, while employment in stores outside of the ban slightly increased. Villarreal said that was particularly "alarming."

"We often hear about the environmental effects of plastic bags, but the economic effects are generally ignored," she said. "When you think about the unemployment rate in this country, any negative impact on employment is something to take notice of."

"We wish we were spending our resources in investing in more American manufacturing jobs and greener recycling technologies," said Donna Dempsey, the spokesperson for the American Progressive Bag Alliance.  "But instead we have to work on correcting the amount of misinformation that is out there. We make sure all of our information is scientific and fact based, as we deal with science versus emotions."

Leila Monroe, staff attorney for the oceans program at the Natural Resources Defense Council (NRDC), looks at the impact on jobs in a different way. She said bag bans provides an opportunity for the industry to innovate.

"They can pull together and look at how they can design better products that are truly durable and easily recyclable," Monroe said. "I have no doubt that if the industry put in the time and investment to retool operations, they can ensure there aren't job losses, but instead work on ways to move the industry forward."

As paper bags are starting to also get listed on the ban lists, more attention is now focused on reusable bags. Reusable shopping bags can be made from fabric, woven synthetic fibers, or even polypropylene.

Vincent Cobb, founder of Reuseit.com, first launched the site in 2003 to offer alternatives to single-use 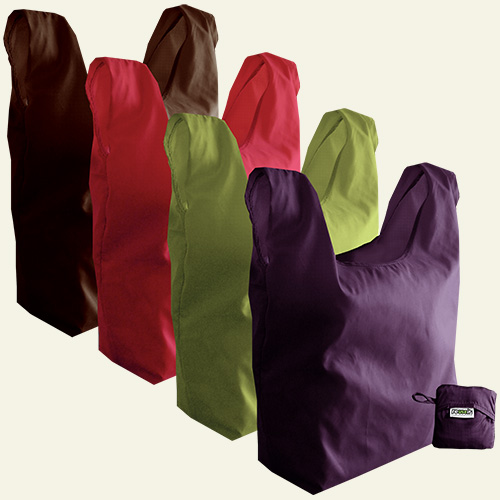 plastic shopping bags. The site then expanded to include all types of reusable products.

Reuseit.com works with more than 100 suppliers for its product lines and ensures that their products are made with what it calls sustainable, high-performance materials. The company's long-term goal is to have all the synthetics they offer made from 100% post-consumer recycled content.

Brad Nihls, VP of operations for Reuseit.com, said the company is all too aware that the reusable bag market is flooded with cheap quality, green-washing products. He said the company warns customers about looking out for cheaply made reusable shopping bags.

"One item of concern with reusable shopping bags are the very cheap reusables that are often given away during promotions or selling at grocery stores for 99 cents," he said. "The concern here is that while they are marketed as reusable shopping bags, they really are just a glorified disposable bag, which we feel is even more damaging than the single-use plastic shopping bags."

The U.S. plastic bag industry sells itself as a "Made in the USA" story, and they often point out that many reusable bags are imported. According to the U.S. International Trade Commission, approximately 573 million reusable bags were imported into the United States in 2011.

Nihls believes that is an unfair criticism of reusable shopping bags. While the company carries bags made in the U.S., Europe, India and China, it ensures that all its products are manufactured with Fair Labor/Fair Trade practices in accordance with Ethical Trading Initiative (ETI) standards.

"Just like any parts of the world, there are manufacturers in China that are committed to quality and integrity and treat their employees and the environment responsibly," he said. "At the same time, you'll find manufacturers in any country, that are not using certified material, not treating employees fairly, not operating a clean manufacturing plant and not paying attention to pollution. There's not a country label on that, it can happen anywhere."

When it comes to plastic shopping bag bans, Nihls said the company doesn't view bans as a big "windfall" for the company.

"You won't hear us talking about banning bags or how plastics are evil because we don't think that is the case," he said. "There is a lot of value in those products, but in our opinion its real purpose has lost track and now the issue is misuse and overconsumption."

What can be lost in the debate between bans, taxes and consumer choice at the checkout, is the fact that plastic shopping bags are fully recyclable, when disposed of properly.

Still, a study conducted by Boustead Associates found that only 5.2% of plastic bags are recycled.

One of the main goals of the American Progressive Bag Alliance is to encourage recycling and Dempsey believes recycling rates are improving.

According to a survey conducted by Moore Recycling Associates, the number of bags recovered increased 27% between 2009 and 2010.These bags made up approximately 13% of the total film and bag material recovered in 2010. This amounted to approximately 127 million lb of plastic bags recycled in 2010, compared with 100 million lb in 2009.

"I don't see bag bans and taxes as a trend," she said. "Proponents are definitely trying to portray it as a trend, but what I see as a trend is an increase in recycling."

Another survey by Moore Recycling stated that more than 91% of the U.S. population can recycle their plastic bags locally, and additionally, nearly 75% of people living in the U.S. can recycle other types of flexible plastic wraps in their own communities.

However, plastic bag recycling requires a different type of infrastructure than plastic bottles and containers. It's been reported that when people put plastic bags in their curbside bin, it has the potential to clog machines at the recycling facilities.

"The problem with plastic bags is that they are extremely difficult, if not almost impossible, to recycle," Monroe said.  "At municipality recycling facilities, plastic bags have to be removed because the lightweight thin film can impact the recycling process."

Instead, consumers are asked to visit grocery chains that will collect used plastic bags and wraps that their customers bring back to the store. Plastic bags must be clean and dry and not contain any food residue, paint, adhesive or stickers.

Recycling plastic bags can be turned into raw materials for fencing, decking, building and construction products, shopping carts and new bags, according to the American Chemistry Council.

Monroe points out that the 5% recycling of bags is still the current and, potentially, future reality.

"There's just a large number of bags available where there is no incentive really to recycle them," she said. "In contrast when bag bans and fees are put in place, they show it's working to reduce waste."

While both sides of the debate continue to state their opinions, national retail chains are somewhat quietly working to reduce waste at their stores.

In an effort to promote the use of reusable bags and keep more plastic bags out of landfills, Target gives consumers a five-cent discount for each reusable bag used at all of its stores.

"By rewarding guests each time they bring a reusable bag, Target helps them to save money and to make a small difference every time they shop at our stores," she said. "Since the launch of our reusable bag program in 2009, more than 80 million reusable bags have been used instead of paper or plastic, and we've saved the equivalent of 200 million plastic bags."

In 2010, Target unveiled recycling kiosks in each of its stores, giving customers a way to recycle many items, including plastic bags, right in their local store.

"The goal of the program is to extend our company recycling efforts, and so far, the program has kept thousands of tons of recycled materials from landfills," she said.

Walmart has a goal to eliminate landfill waste generated by its U.S. operations by 2025. In 2010, the retail giant reduced the plastic bag waste across its global operations by 47.95 million lb, or approximately 3.5 billion bags.

Ron Sasine, senior director of packaging for Walmart, said the company has made positive strides in using more renewable and recyclable packaging, along with in-store recycling.

"Local municipalities play an important role as they handle most of the recycling collected in the U.S.," he said. "We understand what our role is and we also understand where our role is limited. We have made great progress and will continue to push for more recycled content and more renewable content packaging throughout our system."

Supermarket chain Kroger has a plastic recycling program where plastic bags, dry-cleaning bags and plastic shrink-wrap can be recycled in all stores. This program resulted in 26 million lb of plastic being recycled from stores and distribution centers in 2010, according to the company.

Kroger's "Fill the Bag" training shows new employees how to optimally fill a plastic grocery bag as a way to reduce the number of plastic bags at retail locations. By 2014, Kroger wants to save one billion plastic bags through education and aiding in changing customer habits.

Maria Brous, Publix director of media and community relations, said the company has offered in-store recycling of paper and plastic bags since the mid-1970s. In 2011, the company's overall recycling rate was 49%.

Kristen Brown is the daughter of Gordon Dancy, also known as the inventor of the modern day plastic grocery bag. When Brown was a high school student, she actually helped train workers at one of the first grocery stores to ever use plastic bags in her hometown of Middletown, OH. She did not respond to a PlasticsToday request for an interview.

Brown, an environmental consultant for USEPA, created My Eco Shopping Bag system, a reusable bag that aims to provide a functional alternative in hopes of eliminating disposable bags, the ones her father helped create. The system is said to replace 30 disposable bags for every grocery trip.

"We are once again in need of behavior change at the supermarket," Brown wrote on her website. "We now know that both paper and plastic disposable bags harm the environment. The manufacturing process for paper bags is energy-intensive and increases water and air pollution. Plastic bags litter our environment, waste our diminishing oil supply, and harm marine life. The average household uses 1000 disposable bags per year. Clearly, it is time to make a change."

What are the bags made out of? Recycled polypropylene.