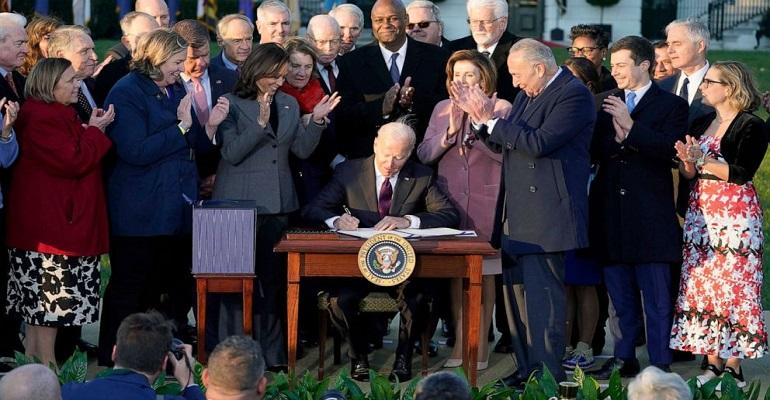 Many of the provisions in the $1.2T Infrastructure Investment and Jobs Act directly affect US manufacturers.

The infrastructure bill President Biden signed into law contains a wide range of provisions that will offer a variety of support to American manufacturers. Some of the programs – especially in energy – apply directly to manufacturers, while other provisions – like supply chain and energy boosters – will indirectly benefit manufacturers.

Items in the bill include:

The bill is likely to produce the additional benefit of encouraging reshoring. “Supply chains have been stretched for two years now, and manufacturers and suppliers and wholesalers are going to look to shorten those supply chains,” said Johnston. “That means repatriating jobs and production. The bill will help in these efforts.”

Support for supply chain improvements will also encourage reshoring. “With shipping and time delays, the money spent procuring goods from abroad may be better spent building manufacturing here,” said Johnston. “The cost differential is beginning to merge. That affects people in manufacturing and transportation.”

DoE identified several provisions in the bill that will have a positive impact on manufacturers. The bill will:

The Association of Equipment Manufacturers SVP of government and industry relations Kip Eideberg issued these comments on the Infrastructure Investment and Jobs Act: “Equipment manufacturers have long criticized the partisan rancor and division that has undermined much-needed investments in our future. The lawmakers who put country first and voted in favor of the Infrastructure Investment and Jobs Act have demonstrated real leadership and a commitment to our nation’s renewal.”

The National Association of Manufacturers (NAM) board chair Mike Lamach said in a statement, “Now that this historic bill has become law, we can build a future worthy of the next generation. For manufacturers, this is a victory years in the making.”

He noted that in 2016, the NAM released a Building to Win plan, that called for exactly this type of bold infrastructure investment. “This plan has guided our advocacy with administrations and legislators of both parties, and now the leadership of President Biden and senators from both parties have produced a bill that achieved many of our Building to Win goals without raising tax rates on manufacturers.”