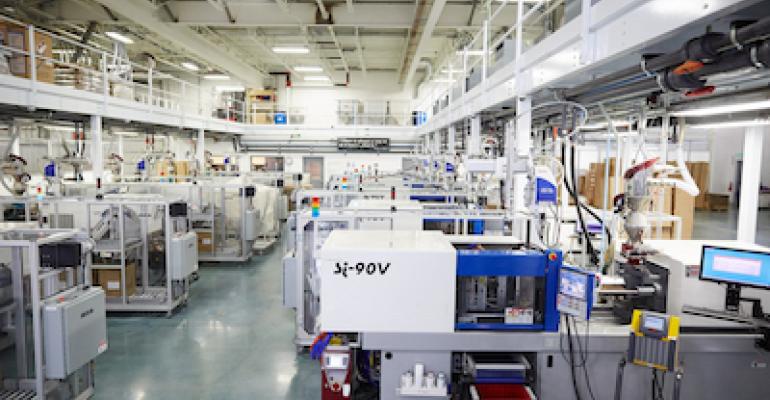 Plastic Components Inc. (PCI; Germantown, WI) has announced the official opening of the expanded Bunsen Drive manufacturing facility. The 23,000-square-foot, $2.2-million expansion began in May 2015 and includes $1.2 million in new capital equipment with four new manufacturing cells and support systems. The expansion more than doubles the total square footage of the building to approximately 40,000 square feet. 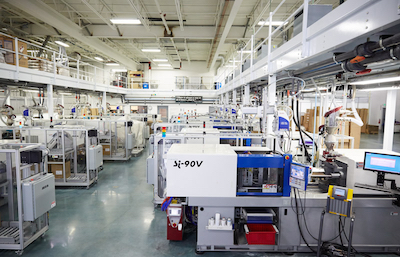 The facility has operated "flawlessly" on a fully automated basis since its original grand opening on November 11, 2011, growing from three original manufacturing cells to 10 in the fourth quarter of 2015. The addition of another four cells will bring the total to 14 fully automated cells by March 1, 2016.

The manufacturing process at PCI's Bunsen Drive facility is so unique that the company was awarded US Patent No. 8,827,674 B1 for the process: A specialized injection molding factory system and associated facility comprising machines on the first floor with the resin supply placed on a mezzanine level.

"After a dynamic start in 2015 and record projections for the remainder of the year, we realized that we needed to add more space, which would ultimately lead to more capacity," said Tom Duffey, President of Plastic Components Inc. "Our production numbers reflect the phenomenal work of our business development team, and we look forward to expanding capacity in 2016. We challenged our manufacturing team to develop a facility design that would allow us to sustain this operating model well into the future, and they have done it. We are very excited."

By taking the existing manufacturing footprint and building a mirror image to the end of the property line, PCI has allowed for a total of 40 manufacturing cells when filled to capacity. The facility houses presses ranging from 55 to 90 tons as well as a 5-ton crane, which will allow for larger tonnage machines. The manufacturing model has proven successful with parts and tools of any size; however, the addition of a larger crane enables the company to apply its successful manufacturing strategy to all components without compromise.

PCI's futuristic factory began with Duffey's vision about 10 years ago of a fully automated factory model. Prior to that, Duffey explained in an interview with PlasticsToday, the company experienced 10 to 12 years of "trial and error," as PCI "aspired to the concept" of automation. "We tried different presses, different robots, different box-handling systems, but we were piecemealing it," said Duffey. "We had glimmers of success, [but] in many cases the automation strategy wasn't working."

That's when PCI made a strategic decision to narrow its focus and standardize its manufacturing cells. "We standardized on Toyo electric presses, Yushin robotics for sprue extraction, press-side grinders—putting the same equipment in every cell rather than a smorgasbord—and things started getting better," Duffey said. "We began getting traction on automation and our utilization rates went up. We realized more success with longer production runs because they didn't get interrupted."

Another component that drove the success of the fully automated facility was making a "full-on commitment to RJG process control technology." PCI first installed a system in 2009 and immediately realized that it was the final piece of the strategic automation puzzle. "At that time we brought in a couple of eDart systems on projects that had been a problem for us, and it immediately solved those production problems for us," Duffey stated. "We decided then that we'd have to make an all-in bet on RJG and from that point to now, we have made a tremendous investment in RJG process control technology."

Today every press PCI brings in is hard-wired with RJG controllers and every mold has RJG sensors. "The only way you can run an essentially unattended facility like Bunsen Drive 24/7 is to know the process is in control for every shot," said Duffey. "Sensors let us know of any anomaly in the run and the parts conveyor reverses itself to move those parts to a different container. If this happens three times, an alarm goes off and the press shuts down. That alerts the process engineers at the Morse Drive facility, and someone drives the 45 seconds over to the Bunsen Drive facility to address the problem."

Today, PCI operates a total of 60 presses with 70 full-time employees. When asked if becoming automated has helped close the "skills gap" that many processors face, Duffey noted that while it is true that he has fewer employees per press than other molding firms, PCI has become a "popular destination in the industry for talented, experienced people who want to work for a dynamic, state-of-the-art technology company that gives them some really cool toys to play with. We've been inundated with applications over the past year. We have a recruiting pipeline to Ferris State University and have hired five graduates over the past five years, and have made an offer to a sixth when he graduates in May. Talented young people want to work for companies that do cool stuff, and we do cool stuff. They have also made some incredible contributions to our success with their innovative ideas," said Duffey.

The Bunsen Drive automated manufacturing plant is geared toward high-volume production, which allows PCI to have 65% press utilization on a sustained basis. Additionally the company focuses on smaller parts (up to 400-ton presses) that are more conducive to PCI's production model.

"What we are really proud of is that about 30% of the parts we produce leave the country," Duffy stated. "We ship a lot of parts to customers in Mexico and in China. One of the great things about this business model is there's no labor, so we are globally competitive. We compete with molders in Mexico and in China. We have a lot of domestic customers who have plants in those countries, and we're proud of the fact that we can ship high-volume parts all over the world from Germantown, WI."