Plastics machinery shipments up 8 percent in 2013

Business levels for manufacturers and suppliers of primary plastics machinery (injection molding, extrusion, blowmolding, and thermoforming equipment) posted another strong quarterly performance in Q4 of 2013, according to statistics compiled and reported by SPI's Committee on Equipment Statistics. Shipments of primary plastics equipment for reporting companies totaled an estimated $335.1 million in Q4.

This was the strongest quarterly total for all of 2013, SPI reports. The Q4 total represented a gain of 3 percent when compared with the impressive total from Q3 of 2013, and it was just slightly lower than the total from Q4 of 2012. 2012 was a capital year for North American plastics capital equipment, with orders for injection molding machines, blown-film lines, auxiliary equipment, thermoforming equipment, and hot runners all up compared to 2011.

For 2013 as a whole, the total value for primary plastics equipment shipments was up 8 percent when compared with the annual total from 2012. 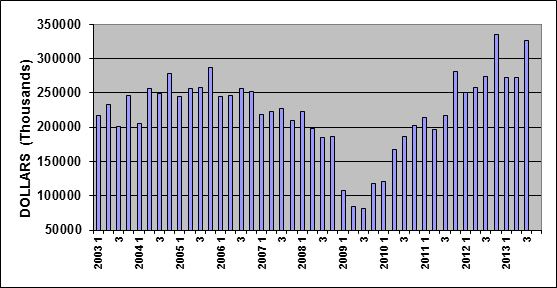 The CES also compiles data on the auxiliary equipment segment (robotics, temperature control, materials handling, etc.) of the plastics machinery industry. New bookings of auxiliary equipment for reporting companies totaled $101.3 million in Q4. This represented a 1 percent gain when compared with the robust total from Q3 of 2013. Precise year-ago comparisons for the auxiliary equipment data are not possible at the present time due to a significant change in the number of reporting companies for 2013. It can be reasonably concluded that the four-year uptrend in this data continued, and the quarterly and annual totals for 2013 represent a solid gain when compared with the comparable totals from 2012.

The gain in the CES data on plastics machinery shipments compares favorably to the increases in the two major data series compiled by the US government that measure activity levels in the industrial machinery sector. According to the Bureau of Economic Analysis, business investment in industrial equipment rose by 3 percent (seasonally-adjusted, annualized rate) in Q4 when compared with Q4 of 2012. The other important machinery market indicator, compiled by the Census Bureau, showed that the total value of shipments of industrial machinery escalated 25 percent in Q4.

Potential gains in the springtime?

"When it is combined with the data reported by the federal government, the CES data indicates that the recovery in the plastics machinery sector was gaining momentum at the end of last year," according to Bill Wood, the plastics market economist who analyzes and reports on this market sector for the CES. "These strong gains notwithstanding, the trends indicate that the manufacturing sector is poised for further growth in the coming quarters. Harsh winter weather constrained the recovery at the beginning of 2014, but accelerating economic growth will return in the springtime. This will generate further gains in the plastics machinery data," Woos said.

The CES also conducts a quarterly survey of plastics machinery suppliers that asks about present market conditions and expectations for the future. The responses from the Q4 survey were little changed from the Q3 survey, and they reveal an upbeat attitude that is broad-based across the industry. When asked about expectations for future market conditions, 87 percent of the respondents expect conditions to stay the same or even improve in the coming quarter, and 95 percent expect them to hold steady or get better during the next 12 months. 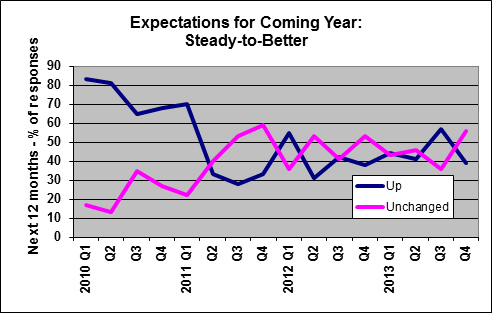 North America and Mexico are still the regions where the strongest gains are expected, but expectations slipped a bit for Europe and Latin America. As for the major end-markets, the respondents expect that automotive, medical, and packaging will continue to be the strongest in terms of demand for plastics products and equipment. Expectations for the appliance and construction sectors were significantly improved.