The first nanomaterial from an entirely renewable resource—that advance, nanocrystalline cellulose (NCC), was among many material developments announced during the recent 2011 Biopolymers Symposium, showcasing how R&D dollars are chasing the bioplastic/renewable polymer space, which may be small in size relative to traditional plastics but is growing rapidly in applications.

The first nanomaterial from an entirely renewable resource—that advance, nanocrystalline cellulose (NCC), was among many material developments announced during the recent 2011 Biopolymers Symposium, showcasing how R&D dollars are chasing the bioplastic/renewable polymer space, which may be small in size relative to traditional plastics but is growing rapidly in applications.

Wadood Hamad introduced NCC to the symposium on behalf of CelluForce, noting that while cellulose is abundant in nature, it doesn't exist on its own, and isolating has heretofore been a major hurdle. Research into the nanocrystals goes at least back to 1951, according to Hamad, when the first colloidal suspensions were made, but leaps in technology and production have been made over the last five years.

In 2006, a company called FPInnovations set up a pilot plant, with a daily output of 2 kg. In 2010, CelluForce and Domtar set up a joint venture with FPInnovations, and are working on a facility in Windsor, ON that is planned to have 1 ton/day of production when it starts up in January 2012.

CelluForce's technology involves removing lignin and putting it through a selective acid hydrolysis to liberate highly ordered crystalline cellulose, with a yield of 95% crystals. The NCC's measure 5 to 15 nanometers wide and 100-150 nanometers long. Essentially a charged polymer, the nanocrystals have an active surface that can be modified and can self assemble orienting into pseudo plans in suspension. Also unique is the chiral nematic structure they impart to surfaces, or, as Hamad described it "color without dye." Like a butterfly, the crystals have different colors from different angles.

Hamad called NCC a "high performance reinforcement in polymer composites," comparing the cellulose-derived nanoparticles to carbon nanotubes, carbon fibers, and high-end composite fibers like Kevlar and Aramid. "NCC can be used and basically compete on an equal footing," Hamad said, noting their high strength and low density. In early testing, a 5% loading of NCC in PLA increased stiffness by 10 times, while also improving its barrier.

The technology is reminiscent of one promoted by PolyNew during the February 2009 Society of Plastics Engineers' Global Plastics Environmental Conference. PolyNew discussed its proprietary technology for the surface functionalization of cellulose fibers, which resulted in hydrophobic cellulosic nanowhiskers. Those cellulosic nanowhiskers were added to PLA to create sheet stock that was suitable for thermoformed frozen food trays.

Merquinsa's Dennis Lauzon highlighted his company's work towards an aliphatic TPU: a new low-color technology that would be "water white" versus the slight yellow tint seen in current biobased TPUs, which use a renewable resource for the polyol segment. Beyond the color, Lauzon said the development promises new functionalities and the opportunity for cost parity with petroleum-based PUR.

Good for auto interiors and sporting goods, the partially biobased aliphatic TPUs would also have UV stability. Product is expected to be available in the first quarter of 2012. "In a couple of years, maybe 18 months, we think we'll have price parity," Lauzon said. The first generation of biobased TPU's mechanical properties, including tensile strength, flexural modulus, chemical resistance, and hydrolysis matched the standard material.

Purac's Sicco De Vos discussed the possibility for durable and semidurable applications in PLA, by tinkering with the resins monomer chemistry. De Vos said tests of an isotactic PLLA homopolymer, which was polymerized using lactic monomer, achieved a melt transition temperature of 180°C, with a steroblock PLA getting up to 200°C, and some stereo PLA blends hitting 230°C. 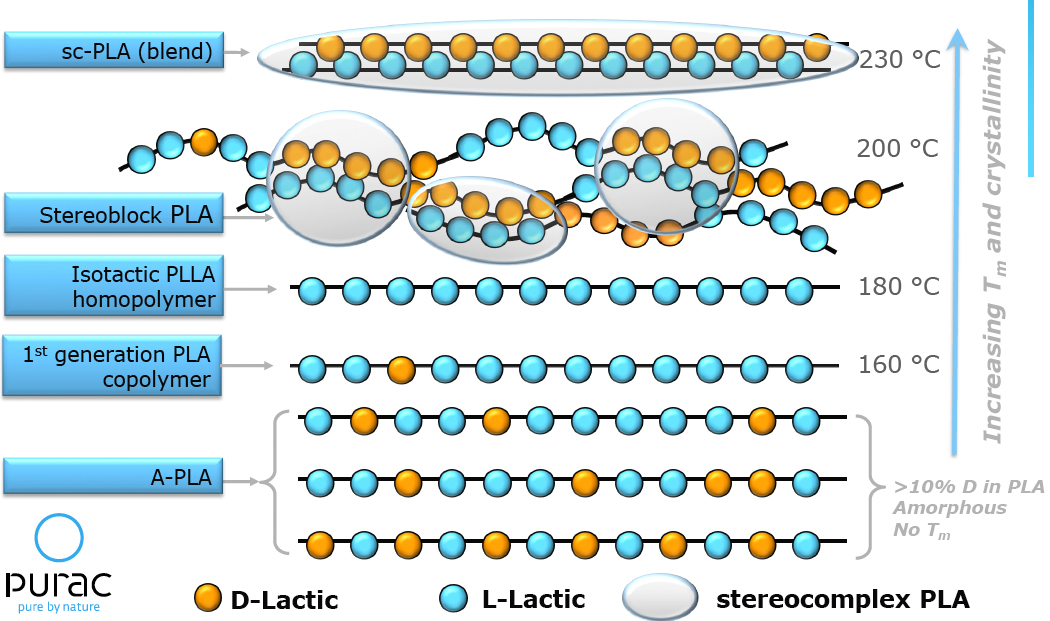 His company's Puralact L and D lactides can prevent side reactions with molecules, allowing the company to better control the final chemistry, with some interesting results. PLLA, which is an isotactic homopolymer of L lactide, was found to have the fastest crystallization and highest melting points. Use of hot or cold molds during studies at the University of Hannover allowed researchers to change the underlying morphology of the material, achieving greater crystallinity, for instance, which can boost chemical resistance and barrier.

Dirk Den Ouden of Avantium, which is promoting furandicarboxylic acid (FDCA) as a renewable route to everything from polyester to polyamide to polyurethane, noted that at commercial-scale production, his company's product could compete with fossil-fuel based materials. One area of interest would be replacing petroleum-based PET, with a PEF, where FDCA replaces terephthalic acid (PTA) and is paired with biobased ethylene glycol.

Compared to standard PET, Den Ouden said PEF's oxygen barrier is six times higher, with a carbon dioxide and water barriers that are two times greater. The glass transition is 11°C higher while the melt temperature is 40°C lower. That lower melting point means less energy can be used in processing. In terms of price, Den Ouden told the crowd: "It's going to be in the same ballpark."

For petroleum-based PTA, Den Ouden said the five-year average is around $1200/ton, while FDCA's running average, at commercial scale, would actually be less. Regarding potential impact on the PET recycling stream, Avantium has tested PET streams contaminated by 1, 2, and 5% with PEF and seen no effect, with plans to research higher levels. Already working with Solvay on a biobased polyamide, the company is actively seeking out resin makers and brand owners to develop materials, seeing more of a future in licensing than material manufacturing.

Compostable adhesive: in multilayer structures of compostable films, BASF said it's launching a compostable water-based adhesive. Epotal Eco was certified in January 2011 under the EN 13432 standard.

New Mater-Bi: Italian film Novamont said the third-generation of its Mater-Bi biomaterial is coming soon. The company's Stefano Facco, who said his firm has more or less doubled its capacity every three years, said Novamont's total capacity now stands at 100,000 tonnes/yr, adding that market demand for biopolymers is expected to triple through 2020.

PHA film grades: Dan Gilliland of Telles, maker of Mirel brand of PHA biopolymer, said  his company hopes to have a food-contact extrusion grade available in early 2012 for cast- or blown-film extrusion. The company is also involved in some studies of anaerobic digestion of compost, with its PHA actually show to accelerate degradation in tests at the University of Wisconsin Platteville.