Changes to the resin identification system – big deal or not?

The ASTM International Subcommittee on Recycled Plastics recently approved what it called major "enhancements" to the plastic resin identification code (RIC) system. The big change? Gone are "chasing arrows," which surrounded numerals from 1 to 7 that defined the resin used in the product's packaging. Now the marking symbol is specified as a solid equilateral triangle around the number.

The big change? Gone are "chasing arrows," which surrounded numerals from 1 to 7 that defined the resin used in the product's packaging. Now the marking symbol is specified as a solid equilateral triangle around the number. 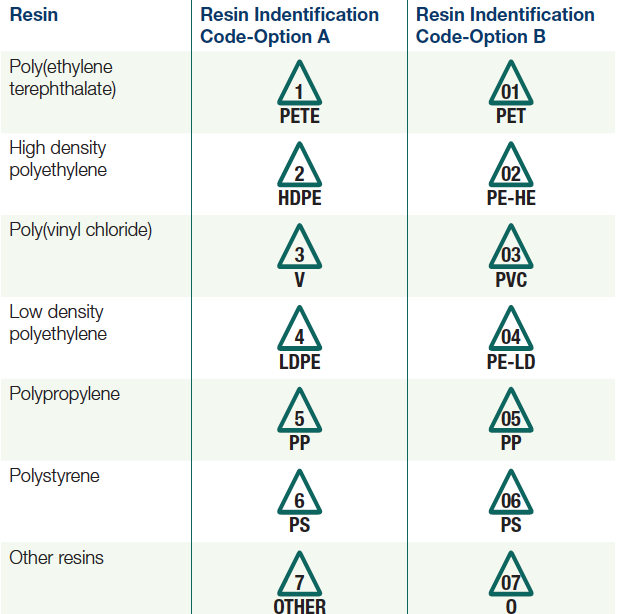 So pretty much they drew in the lines for the arrows, from my understanding. The reasoning behind this change, according to a news release, is that it "provides for more effective utilization across the stakeholder community, while also addressing recent innovations in polymer applications and multi-layer materials."

Okay, so let's back up for a moment. Now there's been much (much, much) confusion on what those RIC codes actually mean. In fact, I asked some of my fellow Coloradans at a local Target if they know what the symbol was on the bottom of plastic packaging. I was met with confusion and shrugs, most had no idea, but one person said simply, "recycling."

The RIC codes were developed by the Society of the Plastics Industry (SPI) in 1988 as a voluntary system to identify the polymer types, with the original goal being to help facilitate efficient recycling for the various plastics. These codes, originally permanently affixed to a plastic container, identified the resin from which the container was produced, "thereby facilitating the separation and marketing of the materials following the end of the container's intended purpose," SPI states on its website.

This is where confusion comes into play. While SPI says that the RIC was never meant to be an indicator of "recyclability," some viewed the labels as just that, which meant they believed that all of the plastic packaging could be thrown together in one bin for recycling. Think about the universal recycling symbol. It features three mutually chasing arrows. See where the misunderstanding happened?

advancements in plastics materials." And that's where we are today.

ASTM believes that by replacing the chasing arrows graphic - commonly associated with recycling - with an equilateral triangle, it can help bring focus back to the system's core mission: resin identification and quality control prior to recycling.

The ASTM D7611 provides codes for the six most commonly found resin types, with a seventh category created for all other types. These categories include: 1) polyethylene terephthalate (PET); 2) high density polyethylene (HDPE); polyvinyl chloride (V); 4) low density polyethylene (LDPE); 5) polypropylene (PP); 6) polystyrene (PS); and 7) other, including materials made with more than one resin from categories 1-6.

The task group is looking into assessing how to differentiate between different melt flows within each resin; identify certain additives that might significantly change the properties of a resin; and better label individual resins (PLA, PC, ABS, Nylon, and others) that are currently designated as "other" in the current RIC system.

The task group is also discussing whether a new code is needed for linear low density polyethylene (LLDPE) to enable products made from this technology to be accurately identified and distinguished from products marked as HDPE or LDPE.

Arrows no more, do you care?

Okay, so let's circle back around to the arrows. There's been a lot of hoopla about these changes, so I'm curious - do you believe by filling in the chasing arrows, people will know that the symbol isn't designed to communicate recyclability? Or do you think they won't even notice? Are these changes a big deal or not? Most importantly, do you even care?